Neural Recognizers: Some notes based on a TV tube metaphor [perceptual contact with the world]

I'm bumping this to the top of the queue because GPT-3. I'm reconfiguring and restructuring like crazy. More later.

A fair number of my mosts here at New Savanna and edited from my personal intellectual notes. In this post the notes are unedited. This is an idea that dates back to my graduate school days in English at SUNY Buffalo. Since I keep my notes in Courier – a font that harks back to the days of manual typewriters – I’ve decided to retain that font for these posts and to drop justification.

Since these notes are “raw” you’re pretty much on your own. Sorry and good luck.

This is the latest version of an idea I first explored at Buffalo back in the late 1970s. It was jointly inspired by William Powers’ notion of a zero reference level at the top of his servo stack and by D’Arcy Thompson. I’ve transcribed some of those notes into the next section. A version of this appeared in the paper DGH (David Hays) and I wrote on natural intelligence, where we talked in terms of Pribram’s neural holography and Spinelli’s OCCAM model for the cortical column:

Imagine a TV screen with a circle painted on it and with controls which allow you to operate on and manipulate the projection system in various useful ways. We’re going to use this to conduct an active analysis of the input to the screen.

Assume that the object to be analyzed is projected onto the screen in such a way that its largest dimension doesn’t extend beyond the circle painted on it. The analysis consists of twiddling the [control] dials until the area between the outer border of the object and the inner border of the circle is as small as possible. That is “minimize area between object and circle” is the reference signal for this servo-mechanical procedure, while “twiddle the dials” is the output function. (Notice that we are not operating on the input signal to the TV screen.) 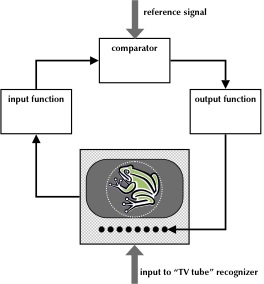 One thing we might do by dial twiddling is to operate on the coordinate system of the projection (I’m thinking here of D’Arcy Thompson’s grids whereby a bass on one coordinate grid becomes a flounder when projected onto another different grid.) Thus if the input is a vertical ellipse a horizontal stretch would lower the area between the ellipse and circle [painted on the TV screen]. One could bend the axes or distort them in various ways. Or, how about allowing the system to partition the screen in various ways and then make local alterations in the coordinate system within the partition.

It doesn’t make much difference what [we do], the point is that the system have some way of operating on the image on the screen (without messing around with the input to the screen ...). The settings on the dials when the area between the projected object and the circle is at a minimum then constitutes the analysis of the object. To the extent that objects differ, the differences in the dial settings differentiate between objects (we are limited, of course, by the resolving power of the system). The settings which are best for a buzzard won’t be best for a flounder, nor a pine tree, nor a start, etc.

The most obvious difficulty with this story is that it depends on someone observing the TV screen and twiddling the control knobs. We want to eliminate that someone so that the system can achieve the desired result itself.

The obvious way to do this is to call on the self-organizing capacity of cortical neural tissue. That tissue is itself the TV screen and control knobs while the appropriate subcortical thalamic nucleus is the source of input to the recognizer. The reference level is alpha oscillation, reflecting the observation that alpha energy is high when the stimulus is familiar and low when it is not. Unfamiliar input disturbs the oscillation and the recognizer seeks to restore oscillation by temporarily altering the properties (twiddling the dials) of the input array (thalamic nucleus).

The neocortex is conceived as a patchwork of pattern recognizers; each is a sheet of cortical columns. Neighboring columns are mutually inhibitory, as in OCCAM (Spinelli 1970). A high level of output from one column will suppress output in its neighbors. The patterns are recognized in the primary input (input array) to a given recognizer. Let us assume a recognizer whose primary input is subcortical and let us set aside consideration of other inputs. The recognizer also generates primary output, which goes to the subcortical source of primary input. The computing capacity of a recognizer is far greater than that of its primary input.


The base state of such a recognizer occurs when the input is random (of a certain unspecified quality). In this base state the columns in the array oscillate – given a rather old notion that high alpha means low arousal, I’ve been thinking this would be at alpha; but, perhaps in view of Freeman’s work, I should revise this in favor of intrinsic chaos. The recognizer acts to maintain this base state under all conditions. When there is a non-random perceptual signal that signal will necessarily perturb the array so that it no longer oscillates smoothly. The array proceeds to form an impression of that input by sending (inhibitory) signals to the primary input. Some cortical columns will necessarily play a stronger role in this process than others. Eventually the recognizer will find some combination of outputs (modifying the properties of the input array) that restores randomness, and hence smooth oscillation. When this point is reached, the impression has been formed. This impression is of the input. In common parlance, we might want to say it represents that input.

Now some process must take place in the array so that the current perturbation can either be habituated into the background or an impression be taken, that is, can become part of the permanent repertoire of the recognizer. This latter, presumably, involves Hebbian learning and is triggered by reinforcement. In the manner of Spinelli’s OCCAM, the recognizer has many such impressions stored in its synaptic weights. A perceptual signal is presented across the entire array and, if it is of a kind that has already made an impression on the array, that impression will be evoked from the array and restore the recognizer to periodic oscillation. If it is of a kind that has not yet made an impression, then a new impression must be made.

Now, in fact, each recognizer has a variety of secondary inputs coming from other recognizers and it generates secondary outputs to them. All of them are attempting to account for their input simultaneously; through their secondary inputs and outputs the recognizers “help” one another out. Further it has inputs from subcortical nuclei which send neuromodulators to the array and it sends outputs to those nuclei which indicate its state of operation. The neuromodulators cause the recognizer to switch between its different operating modes.

I see these operating modes as follows:

Baseline: There is no perceptual load. The array is oscillating at alpha (chaos?).

Tracking: Perceptual input is accounted for. The array has recognized the input and is oscillating at alpha (chaos?).

Matching: The array is under a perceptual load and is attempting to match the input using its current set of impressions. EEG: “desynchronized,” gamma?

Forming (an impression): The array is under a perceptual load, but is unable to match it from its current impression repertoire. It is now forming a new impression. Obviously one critical aspect of the recognizer’s operation is switching from an unsuccessful matching operation to forming. EEG: “desynchronized,” gamma?

Habituating: The array is under a perceptual load, a new impression has been formed, and it has been assimilated into the background.

Fixing: A new impression has been formed. It must now become part of the permanent repertoire of impressions. This is the beginning of LTP. EEG: high alpha?

We could apply this line of thought to group expressive behavior where the members of the group are regarded as oscillators coupled to one another through mutual perception and coordinated action. The simplest such behavior would be moving together, or clapping, to an isochronous pulse.

Assume a group moving to an isochronous pulse. Further assume that this activity is cortically controlled. Now, imagine that various members of the group are driven by subcortical impulses to inflect their movement in noticeable ways. These inflections will be transmitted to others through the coupling. Adjustments made to accommodate these inflections become, in effect, the group’s impression of those subcortical impulses.

This needs to be worked through rather more carefully, which will certainly change things a bit. But what I’m driving at is that these group impressions will become the stuff of culture. Here’s where we get memes and performance trajectories [as those are defined in Beethoven’s Anvil].