Meaning and Semantics, Relationality and Adhesion

For some time now I’ve been making a distinction between meaning and semantics, where I use meaning as a function of intention, in the more-or-less standard philosophical sense of intention as “aboutness.” When I talk of semantics I am talking about the elements in the language system. I have now decided that semantics has two aspects: relationality and adhesion.

I suppose we can think of meaning as inhering in the intentional relationship between the person – and we are talking about human beings here, but we could be talking about animals or maybe, just maybe, artificial minds – and the world. Walter Freeman regarded meaning as inherent in the total trajectory of the brain’s state during some experience, whether conversation, reading a text, or out and about in the world. There is more to the brain’s state than the operations of the language and cognitive systems. Thus meaning is necessarily different from semantics.

The standard philosophical arguments (such as Searle’s Chinese room) about artificial intelligence (which I’m now calling artificial minds), focus on meaning and intention to the utter neglect of semantics, as though it doesn’t exist. It may well be the case that all these artificial systems fail on the grounds of intentionality. It seems to me that the success of this line of argument is also a pyrrhic victory, for it leaves the philosopher powerless to reason about what these systems can do. It leads to a false binary where either the system is a human or it is a worthless artifact.

But that’s an aside. I’m much interested in that philosophical argument at the moment. I’m intersted in semantics, with its aspects of adhesion and relationality. Roughly speaking, adhesion is what ‘connects’ a concept to the world through perception. If we use a standard semantic network diagram (below), adhesion is carried on the REP (represent) arcs. 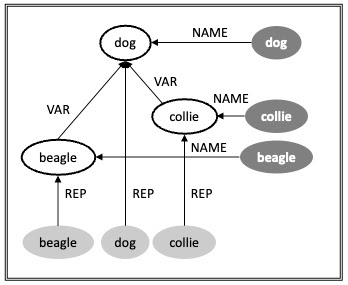 Relationality is carried on the arcs linking concepts with one another. Thus VAR in the diagram is for variety; beagles and collies are varieties of dog. We can also think of adhesion as being about compression (data reduction) and categorization – Gärdenfors’ dimensions in concept spaces. Relationality is about relations between objects in different concept spaces. But that’s only a rough characterization.

Large language models, such as GTP-3, are exploiting semantic relationality – the argument I made in my GPT-3 working paper, but have no access to adhesion. Vision systems are gounded in adhesion and may also exploit aspects of relationality.