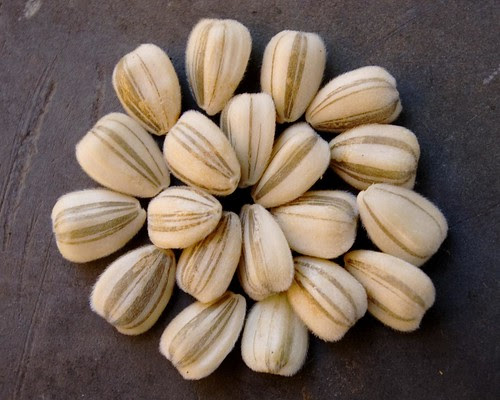 If, six months ago, you’d told me I’d spend half an hour arranging fresh sunflower seeds on a slab of slate and then photographing them I would not have believed you.

Perhaps I would have. Given that I’ve taken a lot of photographs in the last few years and that, in a handful of cases, I’ve arranged this or that so I could photograph it, well, it’s at least possible that I’d take an interest in trumpets (I own half a dozen), CD jewel cases, buttons, or sunflower seeds at some time. So, I suppose, the idea of me photographing sunflower seeds at some future date wouldn’t’ seem THAT outrageous.

But it certainly wasn’t on my agenda. Where, after all, would I get the sunflower seeds?

If, back then, you’d told me, Why, from the community garden where you volunteer, well then: Get outa’ here! I’d helped my mother weed her flower gardens when I was a kid, but that was a long time ago. And just last year I’d spent time photographing flowers in a garden created by the Hoboken Garden Club (don’t know if that’s the group’s exact name, no matter, it identifies them well enough). But it’s one thing to photograph flowers that others plant and maintain. It’s quite something else to volunteer in a garden yourself. 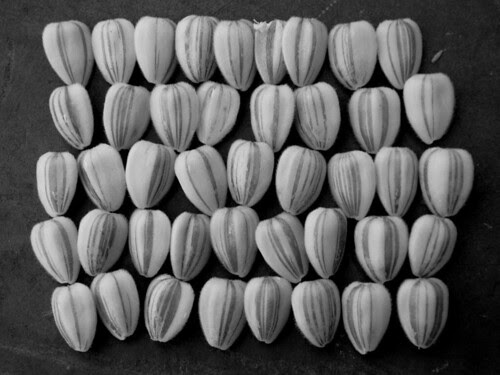 I had no such plans or desires. Yet, when the call went out in April I was there, helping to create the garden. But I went, not out of any particular interest in gardening, but because there was going to be a graffiti mural on one side of the garden and because I figured it would be a way to meet people.

I even decided to follow the sunflowers as they bloomed and went to seed. But arranging the seeds on a slab and photographing them? That wasn’t on my mind. 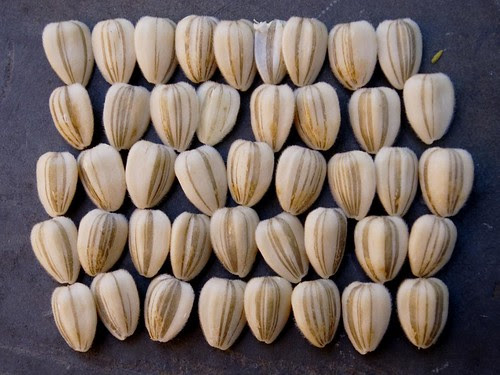 What I was thinking is that it would be nice to have a set of photos showing that progression, from first blossoming, to seeds. And I was curious about the seeds. I’d eaten sunflower seeds—hasn’t everyone?—but I didn’t know exactly where they came from, or how. Sure, the sunflower. But the details? I was curious about them, and wanted to photograph them.

Still, if, even last week you’d said, Bill, in a week you’re going to be removing sunflower seeds from the plant, arranging them on a piece of slate, and photographing them, I’d have been skeptical. Why would I go to all that trouble? In a way, it goes against my informal code, which is to photograph things as they are, not to arrange them in some artificial, or deceptively “natural”, order. Sure, I’d photograph the seeds when they fell to the ground—and it’s been obvious for some time now that that’s what was going to happen—but arrange them in rings and rows? No way.

I didn’t know I was going to arrange and photograph them until I actually started removing them from the plant several hours ago. 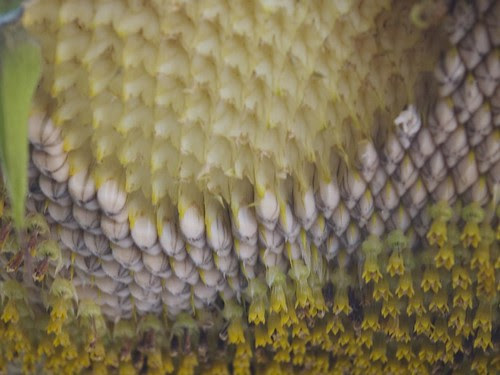 But I didn’t start removing them so I could photograph them. I was removing them so we would have some seeds to plant next year. It’s not, of course, as though sunflower seeds are hard to come by. It’s just that I thought it would be nice, for educational purposes, to say that we grew some sunflowers from seeds taken from flowers we’d already grown. And to be able to produce photographs of the old plants and the new.

You know, the circle of life, right here in the garden. In Lafayette in Jersey City. On Pacific Avenue.

I decided to remove the seeds because I was afraid that there wouldn’t be any viable seeds if we waited until they fell to the ground. For once the seeds fell the birds would crack them open and eat the meat before we could collect them.

That’s how I ended up removing the seeds, one by one, and dropping them into a plastic bag. That’s when I began to think about arranging the seeds and photographing them. But on what? And would it be a bit tedious?

As for the surface, I looked around and spotted this chunk of slate: Perfect! thought I.

And so I ended up—yea—arranging seeds in rings and rows and taking pictures. 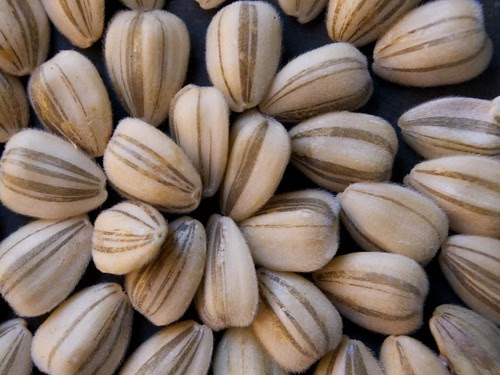