This is a companion piece to Kids in Search of the Dance. That post was about young kids at an outdoor concert wanting to dance to the music but not quite knowing how to do it. They had room to dance, the music was suitable, and everyone would have loved them to see them dance, but they just didn’t have the moves available.

This post is about integrating kids and adults into the same dance. Let’s return to that same concert, by the Gordys in Hoboken. After they’d played for half-an-hour to 45 minutes the band started playing some klezmer music. Almost immediately adults got up and started dancing some version of the Hora, or, more likely, the Horah, a traditional dance originating in the Balkans and adopted throughout the Jewish diaspora.

It is a round dance. People form a circle, join hands and more around to the right. As danced at this Gordys concert the circle often broke and you just had a line of people holding hands and running around the plaza in time to the music.

Here’s some photos I took: 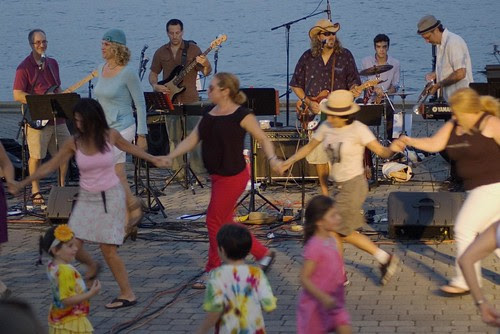 Notice the kids standing around in the center of the circle. In this next photo we have a line which is broken, though you can’t see the ends in the photo: 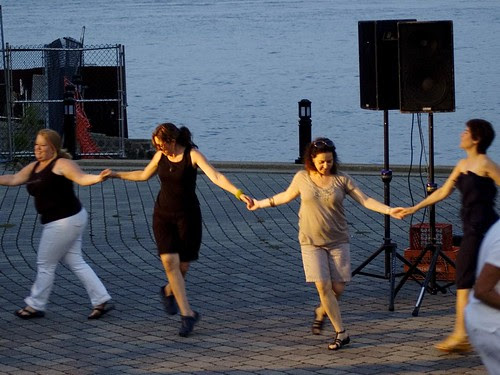 Here we have a circle, or perhaps a circle and a half, and again with the kids in the middle: 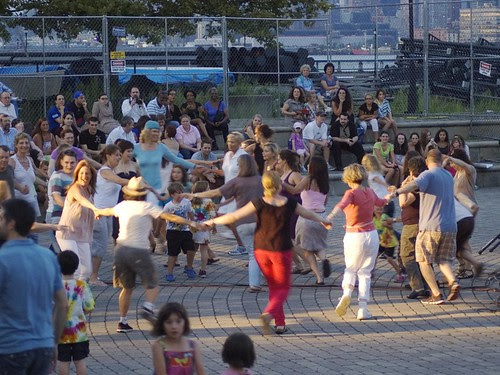 Closed up a bit: 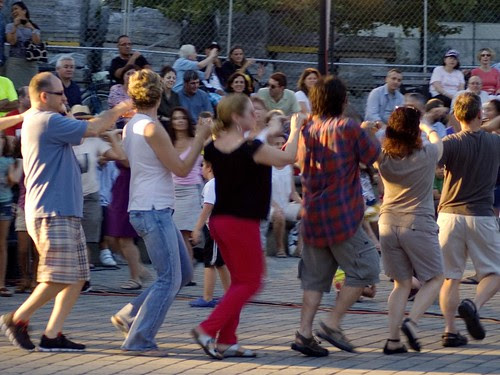 And here we see children integrated into the line: 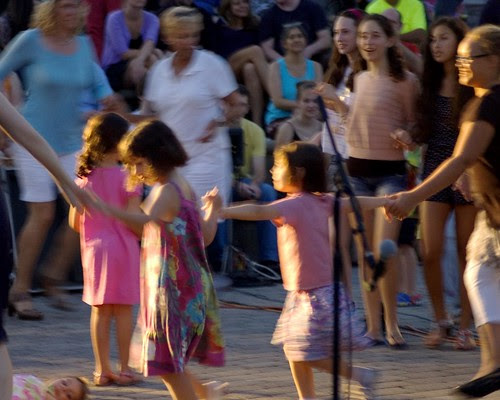 My impression is that the group can’t figure out how to integrate the children into the dance and that the problem seems to be one of height disparity. Most of the time people are dancing with hands held together, and often the arms will be raised and lower in unison. This is easy enough when people are of roughly the same height, but it is awkward when they are not, and the children are distinctly shorter than the adults.

The informal solution seems to be that the children can dance around here and there, as they’d been doing before, and that some small number of them can dance, stand, or mill around inside the circle of adults. Note that the Horah is often danced a celebrations, such as bar and bat mitzvahs and weddings, where the honoree or honorees are raised on chairs in the middle of the circle, thus making it a place of honor.

My guess is that if this particular community where to dance together on a regular basis, say weekly or biweekly, that a more satisfactory method would be created for including everyone in the dance. I’ve been told that one typical solution is to ‘break’ the circle and have all the children gathered together at one end of the line. This means that there’s only one point where a more or less tall adult holds hands with a more or less short child.

This weekend I observed a different solution, though I do not have photographs. It was at a block party with a DJ who played various music. (Some photos posted here, but no dancing.) When the DJ cued up Electric Boogie an all ages group—appeared to be from well under ten years old to over sixty—took to the street in a series or more or less parallel lines and danced the electric slide, which the Wikipedia characterizes as “a four wall line dance.” This music video will give you the idea:

People do not hold hands, which eliminates the height disparity problem. But they do dance the same steps, standing side-by-side without regard to gender. The electric slide involves a sequence of steps (different versions have different numbers) which, of course, people execute simultaneously (they’re often called out in the accompanying music). In the course of the dance people will face all four walls of space, hence the term “four wall line dance.”

Judging by the number and variety of videos that turn up when you search YouTube on “electric slide dance” it is quite popular.