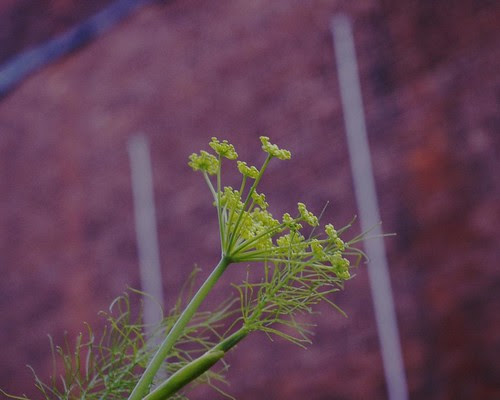 Obviously it's a plant of some sort. Anyone can see that. It's fennel, though that doesn't really matter.

For my question is about the background. What is it? And does it matter? If so, how?

Since I took the photo, I know what the background is. There's nothing particularly exotic or unusual about the background, but you can't really tell what it is from the photo; it's blurred too much. It's reddish and has several stripes, two whitish ones and a blue, perhaps others depending on how you read it.

It would appear to be a wall of kind, but beyond that . . . Is it indoors or outdoors? What's it made of? Is it painted? If not, what's the source of color variation?

And, as I asked before, does any of that matter? I don't think of this as being about anything particularly deep. In fact, it seems rather ordinary to me. But, I think, that's because it has become ordinary. On the one hand, 20th Century art has made us used to art that doesn't represent anything in particular, so we're not necessarily going to ask that background to BE anything except a background.

But the foreground image obviously does represent something, a fennel plant. So we've got this almost clash between a representational forground and an almost mysterious background. I say "almost" because photographers do this all the time. There's a word for it, that blurred background: bokeh, from the Japanese.

Nor really necessary. But, still, there's just a bit of ontological instability.