From railroads to the internet, same land

Ingrid Burrington in The Atlantic:

Google didn’t come to Council Bluffs because of historical resonance. They came for the fiber, which runs parallel to Iowa’s many railroads and interstates. Rail infrastructure has shaped the language of the network (as noted in David A. Banks’s work on the history of the term “online”), the constellation of companies that form the network (most famously with Sprint emerging from the Southern Pacific Railroad’s internal-communications network), and, most relevant to this story, the actual routes that fiber-optic networks run.

Telecommunications companies quickly recognized the value of rail right-of-way as real estate for running cable networks long before the Internet—the first substantial use of rail networks for telecommunication networks starts with telegraphs. It’s a hell of a lot more efficient to run a cable along a single straight shot of property than negotiating easements with every single landowner between, say, Denver and Salt Lake City.

For railroads, this was a win-win, as the right-of-way agreements generate passive income, and the networks could be used for internal operations of the railroads themselves. As the first dot-com bubble expanded, more and more telecoms rushed to place their cables along rail routes. This New York Times story from 2000 documents the moment well; it also uses the delightful (and today, woefully underused) term “cyberage” and mentions an exciting new player in the telecom scene, Enron Broadband Services. Some railroad companies followed Sprint’s suit in this period, creating their own telecom services, like CSX Fiber Networks.

Here's how you know the communications people are there:


The markers of this right-of-way race along railroad routes (and highways, which have a similar right-of-way appeal to telecoms) are not especially impressive, but pretty hard to ignore. They usually take the form of orange-tipped white poles, or orange metal signs, spaced out a few meters apart running parallel to the rails. The orange part usually has a label warning people to call before digging, a phone number to call, and sometimes the name of the company or government agency that happens to own the buried cable. Labeled this way, fiber markers become a testament to telecom history, bearing names of companies that fell in the bursting of the first bubble, long ago absorbed into larger telecom networks.

This is what Burrington's talking about: 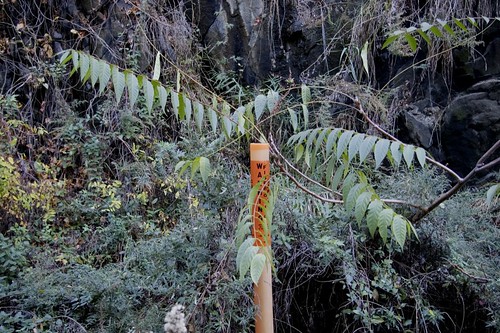 It's outside the old Long Dock tunnel in Jersey City.