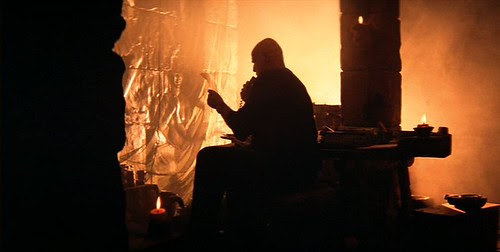 At this point I began to realize that this journey up the river was really a journey though time, and that I to the past. At first it was going a matter of years, and then tens of years, taking me to the kind of Indochina period and to the 50s when the French in Vietnam, and then after that it would be going into decades, and centuries and ultimately thousands of years into the prehistory of human beings. It felt that way. 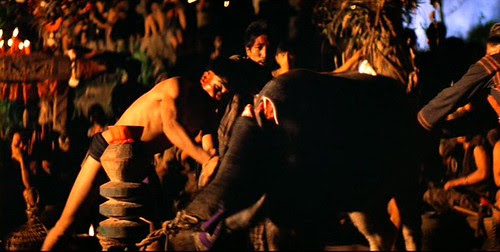 That’s not a shot from a documentary, though I suppose it could be. The animal is real, not a CGI special effect, and the people are real Ifugao villagers, not actors. They’re really sacrificing that water buffalo. And afterward, Francis Ford Coppola says, the people were happy, “like Thanksgiving.” That’s how ritual works.
This particular ritual was filmed by Coppola’s crew as one face of the ending of Apocalypse Now. The other face, of course, is the death of Kurtz. He doesn’t just die, of course, Willard kills him, hacks him to death with a machete. Like a water buffalo. 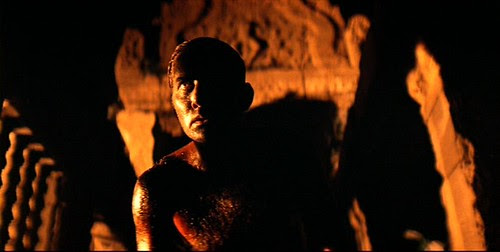 The point – you can’t miss it – is that Kurtz’s death is sacrificial. Coppola says so in his commentary, and he signals it in the film itself in a shot that shows Frazer’s Golden Bough and Weston’s From Ritual to Romance. It doesn’t matter whether or not you recognize those books, much less whether or not you’ve read them. It doesn’t matter whether or not you’re saying to yourself We’re in the land of myth, symbols, and timeless universal pattern. Buffalo sacrifice = Kurtz sacrifice. It doesn’t matter because its there on the screen in the way the two actions are cut together, Willard hacking Kurtz, Ifugao hacking water buffalo, and its there on the soundtrack, which gives us a reprise of The End, the section, in fact, that was used over Willard’s martial arts dance and collapse in the opening montage.
What matters is that it’s in your gut, your heart, your soul. That’s what movies are about; that’s where they go.

All because Francis Ford Coppola, who’d made The Godfather and The Godfather, Part II, made himself available to the Philippines. He shot there, in part because it was a tropical land with scenery like that in Vietnam, and in part because the Philippine Army was willing to let him use their American military equipment. Which of, course, he needed if he was going to make a movie about an American war in Southeast Asia.
The Philippines made him work for his film. It destroyed one of his sets in a typhoon. But it also made him a gift, the Ifugao people. They’re traditional villagers – Coppola says they’d been headhunters ‘till recently – whom Coppola had ‘hired’ to live on set. One of his assistants made arrangements with the head man to move the tribe into a village that Coppola had built to their specifications. The Ifugao took up residence there and there Coppola filmed them.
So naturally they performed their rituals in this bespoke village. And that’s the vehicle the Philippines used to convey as ending to the desperately seeking Coppola.

One of those evenings I was home in my traditional cold sweat. My wife, Eleanor, was shooting a documentary about the making of Apocalypse Now, and she came home very excited, and she had spent with the ceremonies of the Ifugao people. . . . My wife had just come back with this saran-wrapped object in a bag. “You have to see this ritual. They prayed all night and then the next morning they killed a caribao. They hacked it to death with machete, and it was their tradition. . . . And since you’re the big chief they were very concerned you weren’t there and they wanted me to bring you the heart of the animal because they wanted to present it to you as a thing to honor you.”

And there it was. In the Saran Wrap.
That would end the film. Willard kills Kurtz just like he’s supposed to. Intercut with the sacrifice of the water buffalo.
Now, complete the syllogism:

Water buffalo IS TO the Ifugau
AS
Kurtz IS TO _____

Just who is it that’s sacrificing Kurtz? Just what ritual is it? We could say that the US Army is doing the sacrifice, but that’s not what they were doing. They were killing a pain in the ass rogue officer, not making a sacrifice. Sacrifices are major public events; everyone sees; everyone participates. This act was done in deep secret. As the briefing officers told Willard at the beginning, this operation doesn’t exist. Willard had been on several don’t exist operations. He knew the drill.
But no, you say, you’re missing the point. This is a movie, symbolism. Symbolically, the US Army’s sacrificing one of it’s own.
I get it, I say. God only knows the US Army engages in symbolism. But this wasn’t symbolic, not public. It was assassination, and private.
In the symbolic scheme of this film, WE THE PEOPLE are the convening authorities for this sacrifice. That’s what happened when we made ourselves available to the film, and all its symbolism, by watching it. 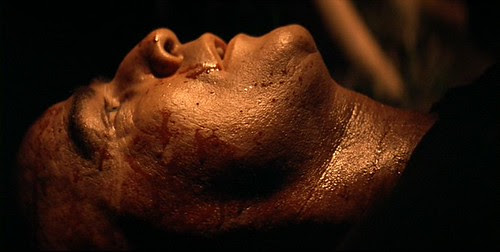 Let me conclude with a passage from another anthropology classic, Mary Douglas, Purity and Danger.

By reputation among foreign travelers this rite was a brutal suffocation of a helpless old man. An intimate study of Dinka religious ideas reveals the central theme to be the old man’s voluntary choosing of the time, manner and place of his death. The old man himself asks for the death to be prepared for him, he asks for it form his people and on their behalf. He is reverently carried to his grave, an lying in it says his last words to hie grieving sons before his natural death is anticipated. By his free, deliberate decision he robs death of the uncertainty of its time and place of coming. His own willing death, ritually frame by the grave itself, is a communal victory for all his people… By confronting death and grasping it firmly he has said something to his people about the nature of life. 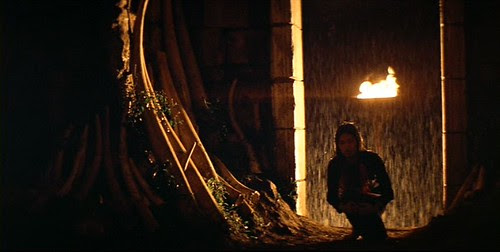