Parallelism in Apocalypse Now, a Note on Lance Logic

David Bordwell’s just done a post on parallelism, which “occurs when characters, situations, actions, or other factors are likened to or contrasted with one another.” in narrative. To illustrate his argument he gives typically lucid analyses of two films, a recent one, Julie & Julia, and one from the 1940s, Enchantment. Each involves two relationships, separated by a generation, but which are narrated in parallel through alternating scenes.

But that’s only one form of parallelism, of which there are many – as Bordwell knows.

Apocalypse Now is a tissue of parallels. I want to look at three. Two obvious ones, and one less obvious.

Let’s start with an obvious one, the end, the double-killing: Willard killing Kurtz, the villagers sacrificing the caribao. The other obvious parallel stalks you through the film from the foreshadowings in the opening montage through those killings: the parallel between Willard and Kurtz. We’re given this one in the voiceover as Willard is choppered to his briefing:

I was going to the worst place in the world, and I didn’t even know it yet. Weeks away and hundreds of miles up a river that snaked through the war like a main circuit cable, plugged straight into Kurtz. It was no accident that I got to be the caretaker of Colonel Walter E. Kurtz’s memory, any more that being back in Saigon was an accident. There is no way to tell his story, without telling my own; and if his story is really a confession, then so is mine.

Pay attention to that first sentence, which implies that Willard’s voiceover comments are retrospective, from some time after the events took place. They are thus the result of some reflection.

Then there’s that word: “confession.” That cannot be an accident. I rather imagine the term had real resonance for Coppola. And its religious implication certainly resonates with the sacrificial ending.

Given that Willard and Kurtz are parallel characters, what’s the difference between them? Yeah, Kurtz went nuts, Willard not. That’s what the story says, but, in that world – in Willard’s words “The war was being run by a bunch of four-star clowns who were going to end up giving the whole circus away” – what’s the difference between sanity and not? And what’s it mean that the sane one kills the insane one, on orders from those four-star clowns? Or rather, in the logic of myth, how does it work in the mind?


The Assassin and the Surfer

Now for the less obvious parallel: Willard with Lance, the only member of the boat crew to survive Willard's mission. One can’t miss the parallel killings nor Willard’s statement of kinship with Kurtz. This parallelism, on the other hand, is easy to miss. That is to say, it may well elude conscious notice. Unconscious notice, on the other hand . . . Well, what is that?

Here’s three frame-grabs that point up the parallel. The first is from the opening montage of Willard in Saigon just before he gets his orders: 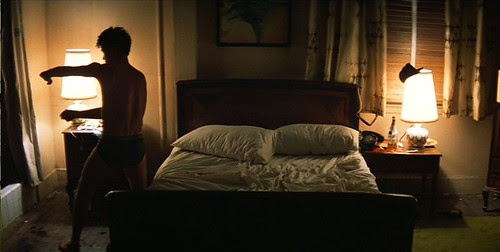 The second shot comes much later in the film. Clean has been killed (bullet), then the Chief (spear). Lance is the one who floated the Chief’s body down the river. Now they’re heading upriver toward Kurtz again, with Lance in the bow of the boat: Finally, we have this scene in Kurtz’s compound. Willard’s in the foreground, and Lance is in the background: 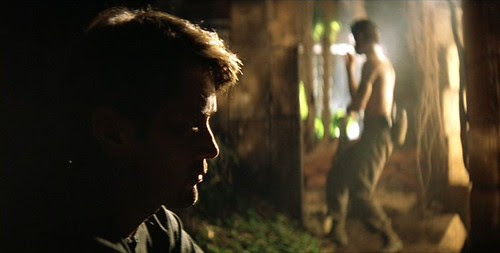 One might suggest that this parallel is a mere accident, one might. And perhaps it is. In cases like this, however, my default assumption is that it is not an accident. It may not be there by conscious intent and deliberate plan; but it is not there by accident. The people who made this movie are too skilled to do such things inadvertently.

What, then, is the significance of this parallel? It’s not simply that the parallel is being asserted between these two, but the way in which the parallel is asserted; both dance (physical grace?), and both survive (spiritual grace?).

I’m not prepared to offer an explanation here and now. And, while I may hazard one in a later post, I think it important that we be prepared to recognize patterns that we cannot explain. Recognizing the patterns and describing them is our first job. Explaining them can wait.

However that explanation is formulated, I take it that it will track the logic of myth and ritual, whatever that is. Here’s a few more dots to be connected into that pattern:

1) Helicopter attack: Kilgore didn't get interested in Willard and his boys until he realized that one of those boys, Lance, was a champion surfer. Kilgore chose the drop point because it had good waves. And we see his guys surfing those waves. In an odd way, this episodes 'pivots' on Lance-the-surfer.

2) Sampan massacre: Only a dog survives; Lance keeps it. Willard dispatched the dog’s owner. I’ll discuss this episode in a later post.

3) Do Lung bridge: Lance is stoned on acid. At one point he climbs up out of the trench, an open target (notice the dog peeking out of his vest): 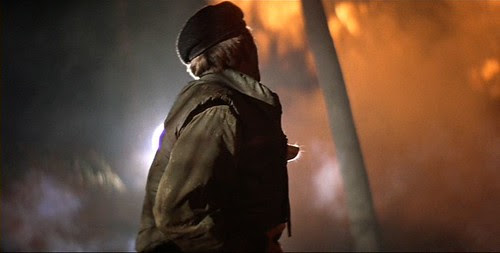 Willard has to call him down. In the commentary Coppola says that, in effect, we see this episode through Lance's eyes.

4) Attack from the fog: They hear chanting and screams coming from the shore. Chef: “Why don’t they fuckin’ attack man!” Lance just grasps some railing, leans back, and screams, as though in empathy with the hidden voices? Is there any Christian resonance in that pose? 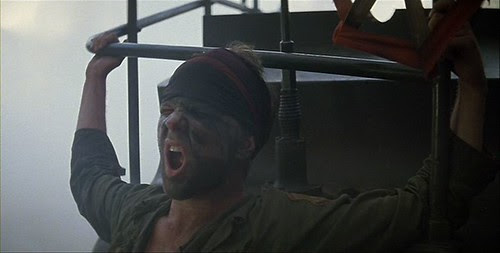 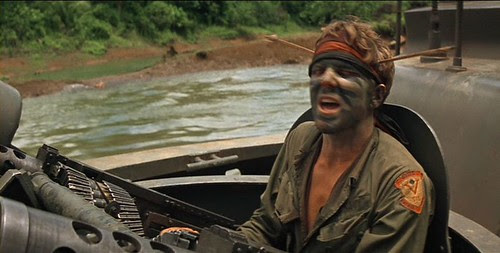 Then the arrows fly, Lance rigs one through his head, and the Chief is killed.

4) Sacrifice: When the villagers capture Willard, they leave Lance alone. by that time Lance was retreating into the mass of followers. That’s Lance at the left, watching Willard as he comes down the steps (the camera has assumed Capt. Willard’s point of view, which is why Lance appears to be watching us): 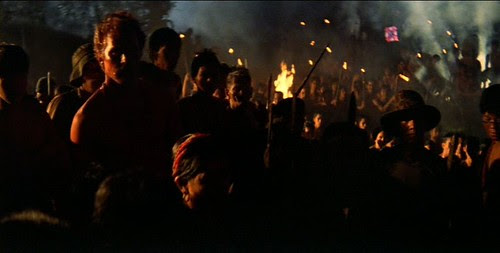 Willard finds him in the crowd after he kills Kurtz and takes his hand, leading him back to the boat. 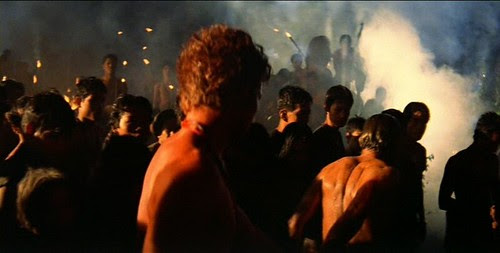 Coppola describes Lance at this point as the "young innocent." Of course, he's talking in mythological terms.

As I say, I don't know how to put this together, and I may well be unable to make a coherent proposal. But I'm pretty sure it all belongs together. There IS a logic here. The other side of that logic, of course, is to figure out why the other three boatmen – the Chief, Chef, and Clean – had to die. That is, what myth-logic parallelism between them accounts for their deaths? While I could talk my way through that one right now, I'm not sure I believe the talk.


Earlier posts about Apocalypse Now:
I’ve said quite a bit about parallelism over the years, though not necessarily under that heading. Two recent posts are relevant: