Not so long after I’d posted my reservations about Apocalypse Now I set about resolving them. I’ve tentatively decided that the film does in fact meet the criterion I’d set for it in that post, that the film should somehow exhibit America’s “need to fight some Other.” That’s hardly sufficient for greatness, which is the judgment that’s in play, but I’ve made it necessary, as that’s an irreducible truth about America’s post-WWII wars.
But I want to set the aside 'till the next post, in which I’ll compare the parallel killings at the end with the killings almost smack dab in the middle, the killings of the innocent Vietnamese on the sampan. In this post I’m going to concentrate on the jungle, with a closing remark on spectacle, Aristotle’s opsis.
Jungle Boogie, Tiger Rage
As I’d indicated in the earlier post, at the end Capt. Willard says in voice-over, “Even the jungle wanted him [Kurtz] dead. That’s who he took his orders from, anyway.” That’s metaphor, right? I mean, the jungle cannot literally give orders to anyone, nor can anyone receive orders from the jungle, even if it could give them. But this film is Art, and Art is often a tissue of Metaphor. In that tissue, such talk makes sense.
Let’s make sense of it. If the jungle is to issue orders, then it must be an agent. How does Coppola make of the jungle an agent? What artifice does he use to that end?
Look at this, the second shot in the film (the first is just a black screen): 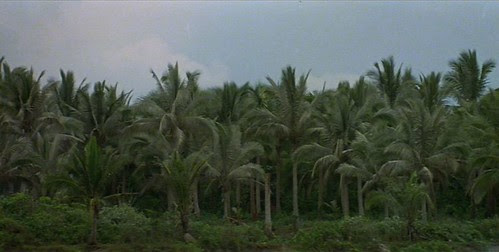 It’s a lush jungle beach, a place you’d like to go on your vacation. Maybe you’d surf, and maybe you’d just sip piña coladas and watch others surf. Whatever. But that’s irrelevant. What’s relevant is that the second shot in this film is a lush jungle shot. The film will shortly take the lushness and the jungle out of it, but for a moment, that’s what you look at: lush jungle beach.
The film grows from that.
Let’s now skip over a whole pile of film: Willard’s drunk, his mission briefing, and Kilgore’s “Flight of the Valkyrie” surf and destruction mission. We’ve been through that mission and we’re on the PBR (Patrol Boat, River) going up river. It’s dawn on the next day: 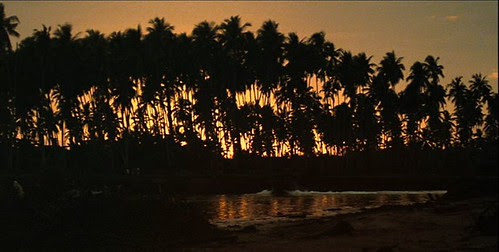 Another gorgeous shot, but this time a contrast to the previous cowboy adventureland violence and, presumably, more violence to come.
The camera moves in toward the shore as we hear Chef, one of the crewmen, talking. See that blue spot to the left of center below the midline? 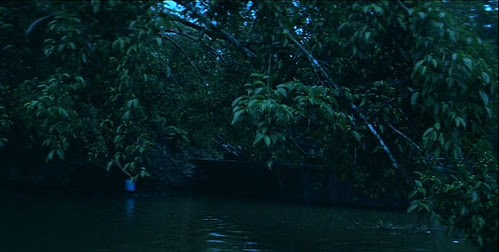 That’s the bucket Chef’s using to wash himself. He’s recounting a fantasy, or perhaps a dream, about meeting Raquel Welch in the jungle. The fantasy involves rubbing a mango pudding on their bodies.
Something something – one of Kilgore’s choppers passes overhead – & a little more something.

Chef decides that he’s going to go hunting for mangoes. Willard observes: “Jus don’t go out there by yourself. You don’t wanna’ go in there alone. Not unless you really know the territory.” And accompanies Chef on his little. As they move through the jungle, the camera follows them: 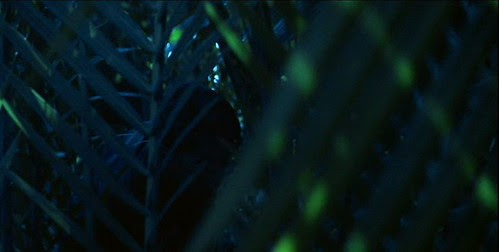 We have a half minute or more of such shots. The camera – that is to say, we’re – is off to the side, but in the thick of it. Motion parallax as manifested in apparent relative movement of layers of foliage defines our movement as we track Chef and Willard. Sometimes we can see them, sometimes not; often enough all we can see is their movement.
All the while Chef is chatting about how he was raised to be a chef and how he came to enter the Navy. Jungle sounds.
Then this shot: 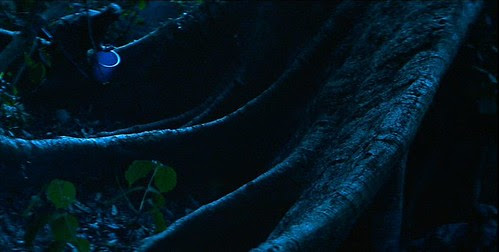 That’s Chef at the upper left climbing over the tree root. You may be able to see Willard’s head and shoulders at the lower right corner of the shot; he’s looking to the right. If this were a clip, you’d see the motion. As it is, he’s just a modulation of the light.
That shot impressed me when I first saw it, and it still does. The immense size of the tree. Trees larger than men, no big deal. But this tree is way larger, way. Chef is awkward as he climbs over that root, further emphasizing the difference in size.
The murk continues in this shot, where they’re just walking from right to left below the mid-line: 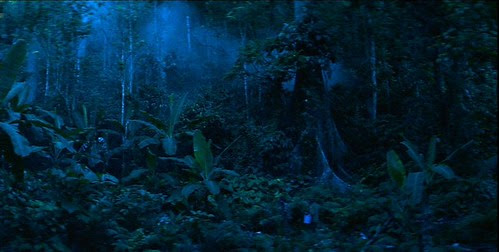 Perhaps you can make out Chef’s bucket about a third of the way across from the right and just above the bottom edge. The men are small, the jungle huge.
Something something – Chef’s urinating, talking about meat, Willard straddles a fallen tree, rifle pointing skyward.
Willard goes on point, Chef follows: 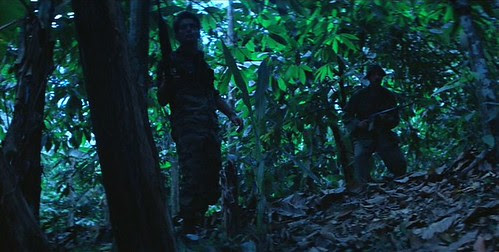 Something’s there. That something turns out to be a tiger. In this shot we’re behind Willard, whose head and shoulders take up much of the right half of the shot: 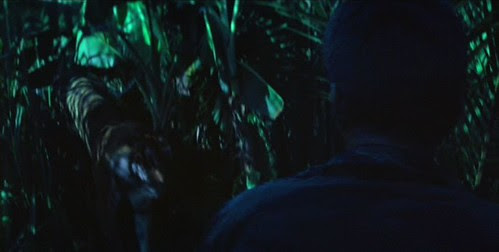 The tiger’s moving in from the left, though again, it’s hard to see it in a still image. Not much easier in a moving one, just elaborate fluctuations in the light on the left side of the image.
The tiger rushes. Both men fire their guns, but Chef panics. Willard the trained assassin doesn’t. We see glimpses of action back at the boat as the crew hears the fire and assumes that the enemy has been engaged. The human enemy, that is, the Vietcong, not the tiger, much less their own fear.
Willard and Chef run back to the boat and the boat shoves off. Clean – another crewman – is shooting wildly as the boat pulls away. Chef keeps repeating, “never get outa’ the boat, never get outa’ the boat,” slips in “fucking tiger, fucking tiger” while ripping his shirt off: “All I wanted to do was fucking cook.”
Things quiet down and the boat continues on up river. The focus lights on Willard: “Never get outa’ the boat. Absolutely goddam right. Unless you were goin’ all the way. Kurtz got off the boat. He split from the whole fuckin’ program. How did that happen? What’d he see here that first tour?” And so he continues thinking about Kurtz as he examines the dossier, on the boat, by flashlight, in the dark.
What of it?
First, a lot happened and was said in that scene that I didn’t mention. Much of it important. But movies are like that, rich with detail that passes swiftly, but also, that registers quickly in the mind as the it follows the camera and the soundtrack. Any full explication of that scene would have to account for all the detail.
This isn’t a full explication. I have one main point to make, and two subsidiary ones. The main point is this: The Jungle. Chef and Willard were all but absorbed by the jungle.
The dim murky unclarity of much of the scene makes my point, that Chef and Willard are all but dissolved into the jungle. WE too, we of the moving camera, we were all but absorbed. And if you think of movies as light, then it’s all fluctuations in the photosphere, as it were. There’s no difference of kind between rocks plants and humans. They’re all luminous flux on the screen.
From this point to the end the film is in a constant effort to distinguish the human from the jungle, the jungle always encroaching. The jungle is thus not merely the setting for the action. It is an actor. Coppola made it one, and he did it in this scene.
Logically, rationally, of course, the jungle can’t be an actor; it can only be a setting, a terrain, an environment, an ecosystem. But ecosystems are living systems. Actors.
There we have it. By degrees, the jungle’s an actor. This jungle is one that can indeed give orders, as it did to Kurtz.
That’s the main point. One subsidiary point emerges from the end of the scene, as Willard starts thinking about Kurtz and examining his dossier. That’s a constant motif throughout the film. We see documents – letters, new clippings, photographs – and here Willard’s thoughts about Kurtz, his mission, the war. Whatever.
Roughly, we can imagine the film as a strand of double-helix DNA. One strand consists of the men in the boat on the river in the jungle action. The other is Kurtz’s story as revealed in documents and in Willard’s thoughts. The two stands fuse, of course, for the last thirty or forty minutes of the film (which runs over two hours). If we would understand Coppola’s technique, we’d have to understand how those two strands were interwoven, the effects of intercut segments from minute to minute, scene to scene. For that’s what Apocalypse Now has instead of a plot, cumulative juxtaposition and counterpoint.
Opsis
The other subsidiary point is about the physical film itself, about what we see (and hear). Aristotle called in opsis, spectacle. That’s the first thing and the rock bottom thing about this film, the thing that blows me way away, how very GOOD it looks and sounds, even in the much reduced version I have at home.
I’ve – we’ve – inherited a critical language derived from the study of meaning in literary texts. That language says little about opsis. Nor does any other language. When reduced to meaning, there’s no difference between a WOW! film and an EH? one.
This is a WOW! How do we come to terms with that?