As I remarked in the fifth post on Apocalypse Now, this scene marks the dramatic mid-point of the film, though it ends a bit after the temporal mid-point. Whatever Willard may have done in the past – he recalls having killed six people – and whatever the PBR crew may have done, in the context of this mission, they’ve been spectators up to this point. They saw the killing around them, but didn’t actively participate. Now things change. Coppola remarks: “From this moment on, when, really you see blood shed so directly both by the crew of the boat and by Willard in the case of the girl, once life is taken, the path is very very different.”

This scene wasn’t in the original script. It had been inspired by the My Lai incident. Walter Murch suggested to Coppola that they needed a scene like that, the senseless slaughter of civilians by trigger-happy soldiers. This scene fills that ‘slot’ in the thematic fabric.

By this point in their trip, the crew of the boat were on edge and on one another’s nerves. In this tetchy state they come upon a sampan: 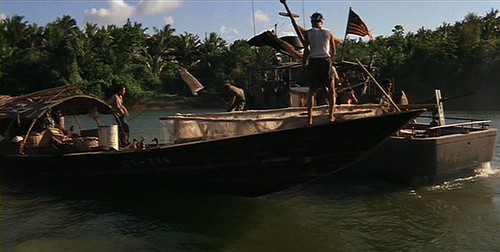 The Chief decides to pull along side the sampan and search it, which is standard procedure. Willard protests, arguing that his mission takes priority. The Chief over-rides him: “Until we reach your destination Captain, you just goin’ for the ride.”


He orders Chef to board and search, which Chef does not want to do. At all. But he does so, in anger, tossing things around, pointing out that there’s nothing there worth their notice. At the same time, Clean’s got his gun trained on the sampan. Take a close look at the fingers on his left hand (lower left): 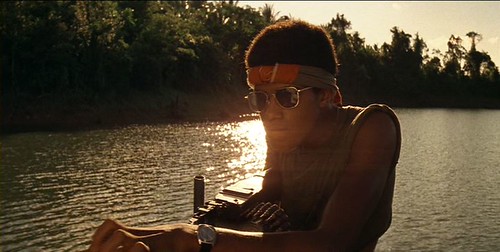 He’s nervously flexing them all the time Chef’s searching the boat.

Then a woman makes a guick move and Clean opens fire, followed by Lance. Chaos. Everyone on the sampan is killed. Chef discovers that the woman had been running to protect a puppy. Chef and Lance fight over it: 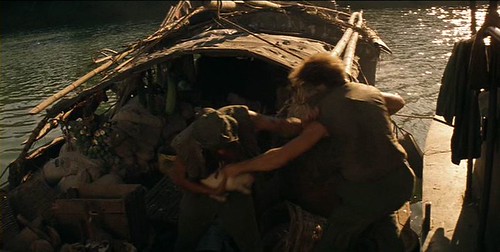 Meanwhile the Chief notices that the woman is not, in fact, dead. He orders his crew to bring her aboard so they can take her for medical help. Willard shoots her, cold. “I told you not to stop. Now let’s go.” 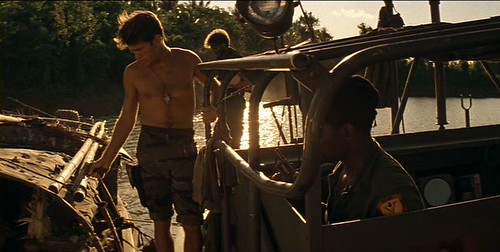 The crew is stunned into silence. Lance cradles the puppy. 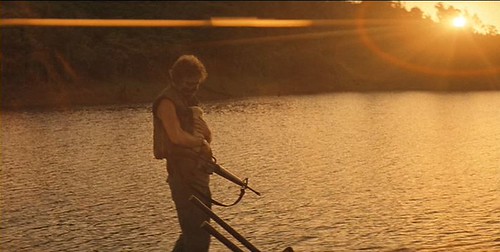 Coppola comments on this scene:

Technically, by the rules of the game, if the woman in question is still alive, they’re obligated to take her to medical help. And of course Willard’s mission is to continue going on, and so, again, the moral issue is dealt with again. He kills her in cold blood rather than to bring her back, assuming she would have died anyway. But in the duel with the Chief, of course the Chief insisted on their inspecting the sampan. And so gain, blame goes back and forth. Ultimately, who has the blame. We all have the blame.

And that seems right to me. No one is specifically to blame, but all are to blame. It’s the collective situation, but no one can, on that account, claim personal innocence.

As they continue up-river, Willard remarks in the voice over:

It was a way we had over here of living with ourselves. We’d cut ‘em in half with a machine gun and give ‘em a bandaid. It was a lie. And the more I saw of ‘em, the more I hated lies. Those boys were never going to look at me the same way again. But I felt like I knew one or two things about Kurtz that weren’t in the dossier.

As Coppola noted, there’s been conflict between the Chief and Willard. It’s Willard’s mission, but it’s Chief’s boat. Each has legitimate authority, but no obviously priority of one over the other. Yes, I suppose you could argue that Willard out-ranks the Chief, but Willard’s Army, the Chief and the boat are Navy. I don’t know how that works out. Beyond that, Willard’s mission may have been high priority, but it was also off the books.

By the rules, this situation’s a mess. It’s in administrative no man’s land. And it gets worse after this point, when they pass into Cambodia, which doesn’t exist, officially.

Given all this, and keeping the whole film in mind: Why’s Lance the only member of the PBR crew who survives the mission? This isn’t a moral question, it’s one about myth logic. Is it that he took the puppy? What’s that about? Did Clean get killed – in myth logic, not moral logic – because he lost it and opened fire for no reason? And the Chief? Because he ordered the search? Or for no (mythic) reason at all. The Chef, why’d he die? He just wanted to be home cooking up some gumbo.

And Willard. Kurtz’s doppelgänger. Kurtz’s nemesis. The plot requires that he live, and that Kurtz die. What’s the difference between the two?

The obvious answer to that is that Kurtz had put himself above all laws and above all other people, while Willard did not. He may have believed that “The war was being run by a bunch of four-star clowns who were going to end up giving the whole circus away”, but he stayed loyal, if not to the clowns, then to the society they represented. But not simply to that society as an abstract entity, for he also remained loyal to Lance, one of the men under his command.

Do I actually believe that? Maybe yes, maybe no. I’ve not yet thought it through.