When I was an undergraduate I discovered that, more often than not, my best thoughts were afterthoughts. I’d work hard on a paper, get it where I wanted it, turn it in. Sometime in the next day or so I’d figure out what I should’ve said. By then, of course, it was too late.
Well, it’s happened again. I worked hard on a proposal for funding a book about graffiti. I reviewed my notes, a bunch of posts I’d published, wrote up the short narrative and the long narrative, the table of contents, and got it all submitted. A day early too.
Now, a week later, I figure out what I should have said in the proposal. It’s one of those Gestalt switch deals, you know, the duck/rabbit. I submitted the duck, and only now have I seen the rabbit. Or, if not the rabbit, the potential for a rabbit. [I'm still stewing on it.] 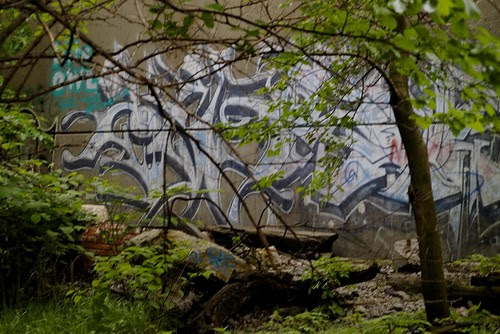 What I submitted was conceptualized was graffiti PLUS the culture in which it swims. What I should have submitted was the culture that’s been organizing itself THROUGH the graffiti. Big difference. What I submitted hangs everything off the graffiti, which is what every discussion of graffiti does. Hell, it’s what every discussion of art, even art-in-context, does. What matters is the culture that organizes itself around and through the art. What matters is the culture and social practice that organizes itself through the graffiti.
You see, when you hang everything off the graffiti itself the first question that hits you is: Is it freakin’ art? That’s an important question. But when you put it first, then everything else depends on the answer. If it IS art, then it’s important in one way. If it ISN’T, then it’s important in a different way, or not at all.
But, really, does the question matter? Is it the right one?
It’s not a question I want to be answering; because MY answer is beside the point. What’s important about graffiti is that it DOES force the question: Is it art? That is, just what IS art, anyhow? And it forces it from a point OUTSIDE the art world, which has fully absorbed Duchamp and Warhol and everything around them, absorbed it and is grinding it out. The most expensive sausage in the world. 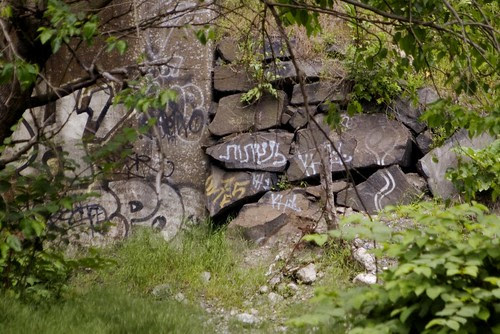 And so graffiti forces the question deeper and farther than it’s gone in a long long time. Some of the people doing the forcing – many of the writer’s themselves – don’t much care about the question itself; they aren’t asking it. They’re just getting up. It’s a question asked by outsiders, like Norman Mailer, WHO ASKED IT LARGE in The Faith of Graffiti. He set the terms in which to ask the question, not simply ‘art vs. vandalism’, but graffiti in the context art history. And he talked with the writers themselves, and with the anti-graffiti mayor of New York, thereby encompassing the society in which graffiti lives. As for Jon Naar’s photographs of the graffiti, they ARE art; and they’re ‘mere’ reproductions of the originals.
So there we have it: graffiti, the question, the society, and art. How do they interact?
I’ve got several contributions to make: In the first place, I’ve documented the changing life of graffiti on a limited set of walls. Everyone who knows graffiti knows it happens. But it hasn’t been documented and it hasn’t been much thought about. The life of graffiti has been but a shadow behind the high-gloss images in the books and, more recently, digital bits on the web.
What’s important about graffiti isn’t a few selected ‘works’ that have somehow crossed the finishing line into ART. Graffiti REARTICULATES the environment in which it lives. It is environmental / ecological / community . . . ART? Yes / No? Whatever, it’s environmental / ecological / community WHATEVER.
And then there’s the nature of the images themselves. As Susan Farrell pointed out to me in email, graffiti’s the first form of abstract imagery to reach a mass audience. That’s important. But how and why has it happened? What does it enable? Where can the future go with THAT? 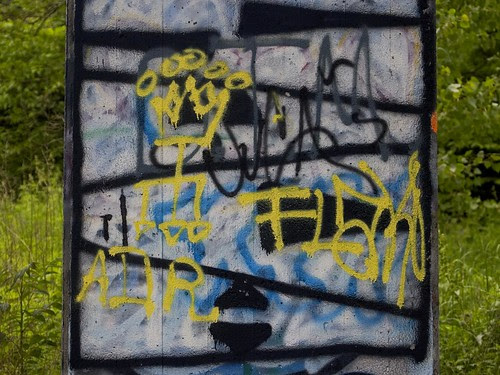