Of Lists and Litanies

Lists can be simple things:

Lists consist of items, and an ordering of those items. The ordering may or may not be significant. When I listed the days of the week, for example, I did so according a standard principle for that particular list: temporal order. I could have listed them alphabetically: Friday, Monday, Saturday, Sunday, Thursday, Tuesday, Wednesday. Strange, no? Yet that’s how you’d find them in a dictionary with, however, lots of other items between them.

That list, of course, is English-specific. I don’t know the name of the days in Chinese, but one can, of course, check the web and find out. And what I found out, among other things, is that before the West came knocking, the Chinese week had ten days.

Back to our lists. There’s no particular order to the ingredients list. At least I don’t think so. I listed the planets in order from the Sun out, another convention. Had I used the alphabetic convention, that list, too, would have been odd.

And then there’s that list of the positive integers. That’s a most special list. How would you alphabetize it? You can’t, not in THAT form. That’s the list, it has no other canonical order, and, unlike those other lists, this one goes on and on and on and . . .

Of course one could convert the integers into number names and then alphabetize those. But which names? The cardinals: one, two, three, etc., or the ordinals: first, second, third, etc.? The alphabetizations will be different. But, alas, whichever way you go, you still have a problem. Think about it.

How can you properly alphabetize a list if you don’t have the whole list? Imagine if I’d alphabetized the days of the week but had been working from a corrupted list that omitted Thursday. I’d have this list: Friday, Monday, Saturday, Sunday, Tuesday, Wednesday. When Thursday finally showed up I couldn’t tack it on the end; I’d have to insert it there in the middle.

Well, that’s the problem we face when alphabetizing a list of the positive integers. There’s always going to be one more positive integer. Always. No sooner are we done with alphabetizing the current list when another integer shows up. Let’s start with just two integers, 1 and 2, and add the integers to the list one by one. We’ll alphabetize the cardinal names.

No, I’m afraid that alphabetizing that list is hopeless. And pointless as well.

All of a sudden, though, it’s looking like lists aren’t quite so simple. One might even, in the furthest stretches of one’s imagination, conceive of lists and a listing as being profound. It’s thus worth noting the one of the oldest existing programming languages, with hundreds of variants, was designed for LISt Processing: LISP. And LISP is the darling of the AI world.

Think of it, computing as list processing. And you thought computing and computers were about numbers.

The act of forming lists must have been aided by the invention of writing systems. Obviously, one doesn’t need a writing system in order to form lists, but writing facilitates working with lists. Historically, lists seem to be among the earliest written texts we have. Perhaps the elaboration of writing systems was, in some measure, driven by the desire to formulate lists.

In Information Ages (Johns Hopkins 1988) Michael Hobart and Zachary Schiffman list some of the lists found in an Assyrian collection of cuneiform tables from the seventh century BCE (p. 45):

Of the seven hundred extant cuneiform tablets in the royal library, the largest group consists of three hundred “omen texts.” These lists consist of short, conditional statements correlating various phenomena with predicted outcomes, such as “If a man’s chest-hair curls upwards he will become a slave.” The next largest group, two hundred tablets, comprises sign and word lists organized according to a wide variety of principles, largely to aid Akkadian-speaking scribes in mastering Sumerian, a dead language early in the second-millennium. A related group of one hundred tablets provide interlinear translations of Sumerian incantations and prayers. Finally, some one hundred tablets contain assorted conjurations, proverbs, and fables, of which only about forty record epics, like the famous story of Gilgamesh.

The tablets containing these lists, of course, would have been rare and precious objects. The ability to read and write them was rare as well. Were the tablets sacred objects? And the lists on them, sacred knowledge?

More recently, quite recently in fact, we have the Latour litany, so named by Ian Bogost, who has conveniently provided a web toy to generate (simulacra of) such litanies from Wikipedia topics. Some examples:

Bogost glosses these random sections through the Wikipedia thus:

Like all Latour Litanies, this little gadget underscores the rich diversity of things. It also reminds us that human beings are among them, since a large number of Wikipedia articles describe living and historical persons.

These lists of objects, which often appear in my writings, are not my own stylistic innovation. They can be found in any author who wants to reawaken our awareness of the particularity of individual things. Ian Bogost calls them ‘Latour Litanies’ just because Latour does them so nicely, but they are far older than Latour.

In many cases I try to have the lists include one object from the sciences, one living creature, one machine, one compound entity, one human political unit and perhaps one fictional entity, just to enforce the notion of a ‘flat ontology’ in which all objects are equally objects. So here’s a sentence you might find in one of my books, though I’m inventing it right now: ‘The world is packed full with objects: neutrons, rabbits, radar dishes, the Jesuit Order, the Free City of Bremen, and Superman.’

Pay attention to that recipe: 1. one object from the sciences, 2. one living creature, 3. one machine, 4. one compound entity, 5. one human political unit, 6. one fictional entity (optional). Whether or not you buy into flat ontology, that’s a recipe for a list that implies the cosmos.

All of it, in only six items. That’s one powerful list. Mucho mojo, that.

Finally, I leave you with some frame grabs from the opening moments of Hayao Miyazaki’s Ponyo. 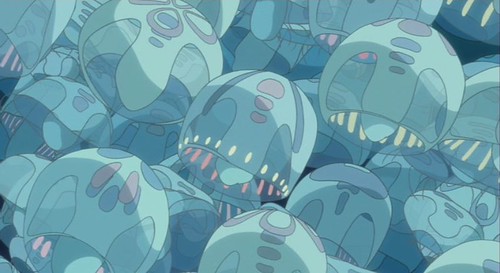 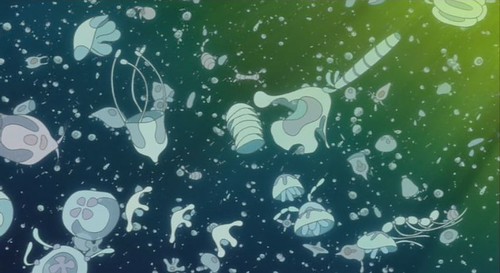 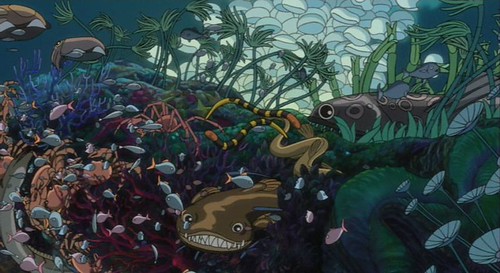 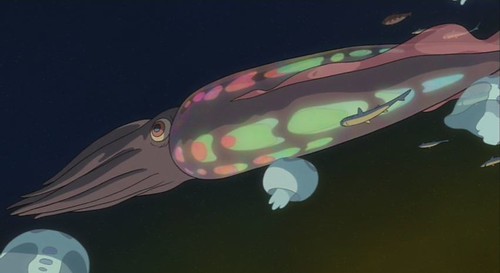 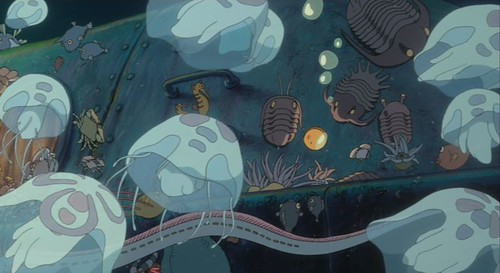