You Know You Want to See It: The World-Wide Wall 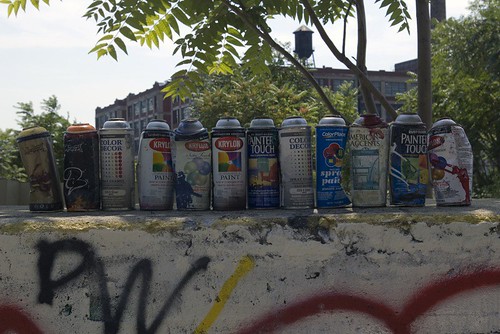 Writers are the hierophants of an unapprehended inspiration; the mirrors of the gigantic shadows which futurity casts upon the present; the words which express what they understand not; the trumpets which sing to battle, and feel not what they inspire; the influence which is moved not, but moves. Writers are the unacknowledged legislators of the world.
– Percy Bysshe Shelley*

There’s been some famous walls in the world. The wall at Jericho that Joshua trashed with his mighty music. The Great Wall of China. Hadrian’s Wall. The Berlin Wall. And others.

I’m not talking about them. All of those walls have one thing in common: they’re meant to separate; to divide and defend, to keep the barbarians and marauders out. The wall I have in mind is different. It’s a wall that connects: the World-Wide graffiti Wall, or just the World-Wide Wall (WWW).

This wall is both real and virtual. It’s real because graffiti’s gone round the world in the last 40 years. It’s virtual because all those 10s of thousands of walls are not physically connected to each other, and never will be.

But conceptually they’re all connected by the same impulse, to reclaim the world from the mess created by industrial war-mongering polluting civilization. Aerosol the industrial waste and thereby create a New Savanna on which new civilizations can band the earth in this, the 21st century, a world of images cast by futurity on the present.

And Google Street View can be the basis of making this WWW visible to all. Much of the world’s graffiti is already there in its images. If Google’s image-processing software isn’t up to the job of finding it in the already collected imagery, well then crowd-source the job. Make it so that anyone with GPS info on their graffiti flix can index them to the WWW, that way we can keep the WWW up to date and incorporate all the graffiti that isn’t visible from the street.

The rest of this post walks you through the concept of the World-Wide Wall. It is lightly edited from a post I originally threw up on 15 September 2011.

As always, by graffiti I mean the specific tradition that started in NewYorkandPhilly in the late 60s and early 70s. This graffiti goes on walls, mostly but not entirely out doors, often in acts of vandalism. By the world-wide wall I mean all the graffiti in this tradition considered as a single ever-changing object. Given its large spatial extent—six continents, and, who knows, maybe there’s some on Antarctica too—this is surely one of Tim Morton’s hyperobjects.

One thing that interests me about the WWW is its geometry, the spatial distribution of its discontinuous parts. Those aren’t connected together in one place, nor are they uniformly distributed. They aren’t, for example, evenly spaced on a rectangular grid.

For one thing, they are on land, not in the ocean, though surely graffiti exists on many islands, e.g. the Japanese islands. Graffiti tends to be in urban areas, which are not evenly distributed. Nor is it evenly distributed within urban areas. Given an area with a fair complement of graffiti, it will not be evenly distributed in that area. We must also consider the graffiti that’s placed on freight cars (known as ‘freights’ or ‘fr8s’) and on trucks. That graffiti moves from place to place.

Consider the map below, which indicates the graffiti zones in the Jersey City neighborhood where I’ve taken most of my graffiti photos: 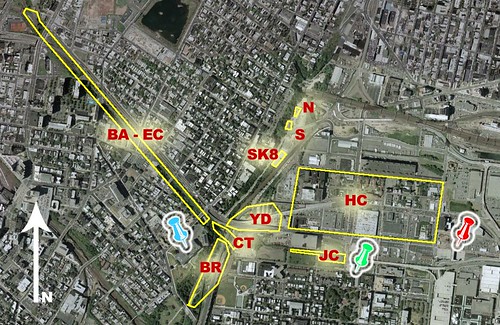 The red pushpin is the entrance for the Holland Tunnel to Manhattan; the green pushpin is the building where I lived for a decade; and the blue pushpin is Dickinson High School, which overlooks the Hudson River. The graffiti zones are outlined in yellow. While there are tags all through the area, those zones are where you find the elaborately worked ‘pieces.’ The pieces are not uniformly distributed within those zones. In particular, zone HC is thinly populated, but it didn’t make sense to be more exact in a map of this scale. Area JC is the Newport Wall that was mentioned Gastman and Neelon’s recent The History of Graffiti in America. Finally, I note that one wall in area BR has become obscured by a tree that fell on it when Tropical Storm Irene passed through.

Now, let us imagine that we’ve mapped all the graffiti in the world as of some arbitrary date, and that we’ve mapped it down to, say, the square meter. What’s the shape of this distributed object? In particular, is it a fractal?

Further, let’s play six-degrees-of-separation with graffiti writers. Two writers can be considered linked if they’ve painted the same wall. It doesn’t matter whether or not they did it at the same time, or whether or not they’ve ever had face-to-face contact. Let us, however, add the provision that their work must have been simultaneously visible for, say, at least a week. Now, how many links between any two writers?

As you think about that question, consider the fact that only a few miles from the above area in Jersey City is a building in Long Island City, 5 Pointz, that has attracted graffiti writers from all over the world. The building is managed by a man who writes as Meres. Meres has gotten up on one of the walls in zone N in that map. Because of his position at 5 Pointz, where he has, of course, gotten up, Meres is closely linked to writers the world over.

Alert! 5 Pointz is all but over. Jerry Wolkoff, the developer who owns the building, wants to cash out and put in high-rise residential space. Jersey City has plenty of old buildings that could take up the slack. Is there someone in the city with the imagination to step up to the plate?

Finally, politics. Almost all of the graffiti on those sites is vandalism, thus implicating the institutional structure of society. Further, sites BA-BC, BR, CT, and YD are all posted no-trespassing zones, which means that I was breaking the law when it walked those zones taking photographs.

I would hazard to guess the electoral politics of graffiti writers. I suspect it’s mostly unformed. But I also suspect that much of it would be in sympathy with this piece from zone YD: 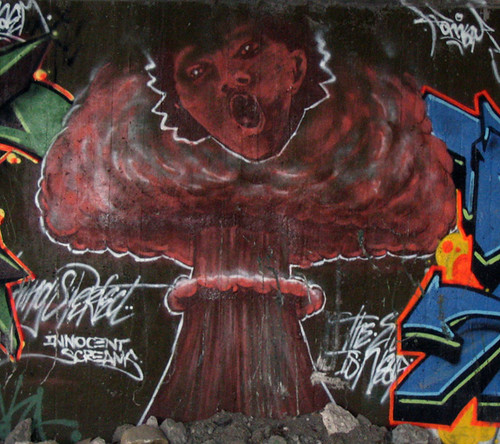 To those who worry about alerting the world to global climate change, I say: get graffiti writers to put it up on the WWW.

* Yeah, I know. That’s not quite what Shelly wrote. Where I have “writers” he had “poets”. Writers, poets, what’s the difference?