When I was young I looked to the blossoming of forsythia as a sign of Spring. I still do. But this isn’t a post about forsythias or Spring. It’s about photos, such as this: 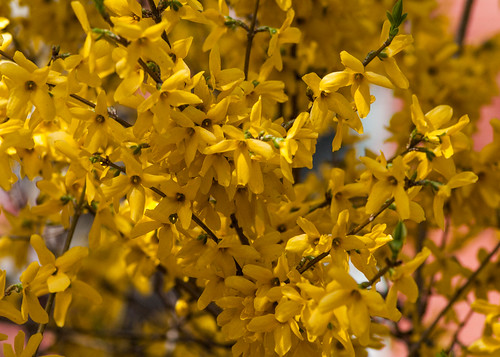 I’m in fairly close, so you don’t see the whole bush. That, of course, is deliberate. Much of the image is in focus, but by no means all of it. There seems to be more in focus on the left than on the right. How deliberate is that.

For deliberation is an important issue. I take these photos while walking out and about. Many are taken quickly, some with a bit more deliberation and care. I suspect that that first photo was taken rather quickly. That’s likely the case with this rather different one: 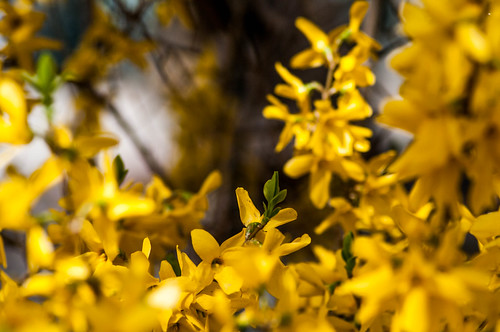 Compositionally, this is very different. To a first approximation, that first photo was (almost) all yellow. This is not. I’m sure that’s what caught my eye as I was scanning the bush with the camera (I sorta’ remember taking this shot), looking for images. We’ve got right, bottom, and left yellow around a deep darkish background. Yes.

And almost none of this image is in focus, just some petals and leaves below center. The rest of the shot is out of focus, often very much so. How deliberate is that?

There’s two kinds of deliberation. My choosing to upload this photo can’t help but be deliberate. I don’t have a policy of posting everything. Even before I can upload an image, however, I have to get it from the camera and realize it through Photoshop’s Lightroom. That is generally not a long-involved process, but it does take a minute or two for me to adjust this or that, and perhaps to crop. No cropping here, but some adjusting of shadows, brightness and contrast, and saturation.

In that process I certainly saw that most of the image was out of focus, and that didn’t bother me. In fact, I rather like it. It’s something I play around with, though in a somewhat constrained way.

The point is that I’ve spent enough time with the image to be fully aware that most of it is out of focus. Yet I choose to render it and then to upload it (my basic policy is to upload any image I take time to render).


That’s one kind of deliberation. The other kind takes place when I shoot the image. That’s why it’s the center that’s in-focus. I generally shoot using auto-focus, which is generally rather quick. But it can also be tricky. While my camera allows me to choose from a variety of auto-focus routines, I’ve not learned what they or nor spent much time playing around with them. However it was set when I bought it (used), that’s what setting I’m using.
One thing I find myself doing in situations like this is setting the focus on one part of the image area and then shifting the camera to the area I want to shoot. I generally do that when I want the focal plane to be somewhat behind the objects that are closest to me (and hence to the camera). That means that the nearest objects will be out of focus, which is certainly the case with this photo.

I don’t recall just what I did when I took this shot, but I likely did use a focus-and-shift strategy. That, of course, is deliberate. But you can’t tell what the photo will actually be like until you’ve taken it and then gotten it out of the camera. 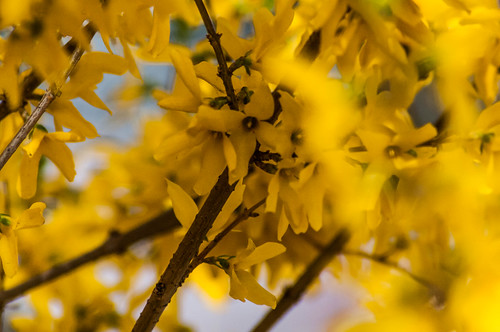 Again, most is out-of-focus, but not so much as the previous one. The central area is in-focus. This shot is more overall yellow than the second, more like the first. But we’ve got strong diagonal branches and twigs. That’s the shot is about, I suppose.

But why would I permit such large areas of these images to be out of focus? Really, I like them that way. I’m sure that, by learning more about my camera and about photographic technique, I could get a greater depth of field, allowing more of these images to be in focus. But that doesn’t interest me, at least not now. Learning that stuff would be tedious and would require that I spend more time thinking about the camera and less time thinking about what I’m doing with it.

If “photographic realism” were my goal then, yes, I’d have to learn more about technique so that I could achieve a greater depth of field. But photographic realism isn’t my goal. It’s at best a starting point, and it does dominate many of my photos (such as my graffiti shots). But it’s irrelevant in some cases, mostly my “shaky-cam” photos. And it’s something of a secondary consideration in these flower shots.

Though, that’s not quite it. In these shots, I’m playing with the idea of focus. It’s important that part of the image be sharp, but it’s also important that much if it blurry. Not only do I want to be aware of that, I even want you to think about it, just a bit.

I doubt that I’d be taking such photos if I hadn’t see lots of abstract art, and done some of it myself. A blurred image is an abstracted image. These images inhabit a zone between representation and abstraction.