Mother and Son, Gender and Violence in Dumbo: Some Quick Notes

I’ve got Dumbo on my mind. But this is just a quickie, mostly screen shots and light narrative. The analytical work will have to wait. You are, of course, welcome to supply your own analysis. 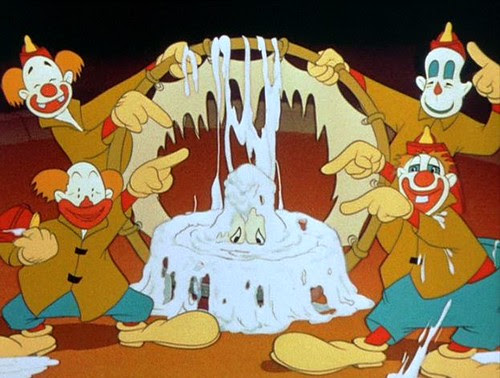 All the elephants we see are female, except Dumbo. The stork who delivers him—and why does Disney make such a big deal out of this fairy tale about of storks delivering babies?— refers to him as “little fella.” Mrs. Jumbo names him Jumbo Junior. Jumbo Senior is nowhere to be found.

In the tent-raising, the roustabouts are male and the elephants, of course, female. The final action in the sequence is to raise the center portion of the tent up the center poll. The elephants provide the muscle: 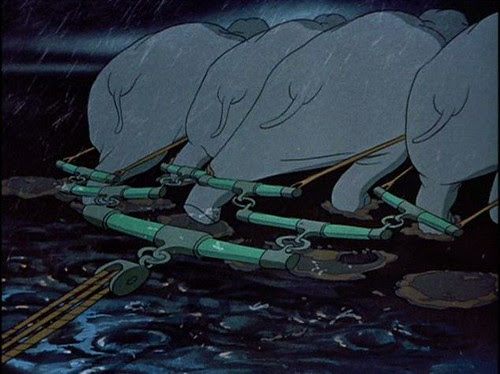 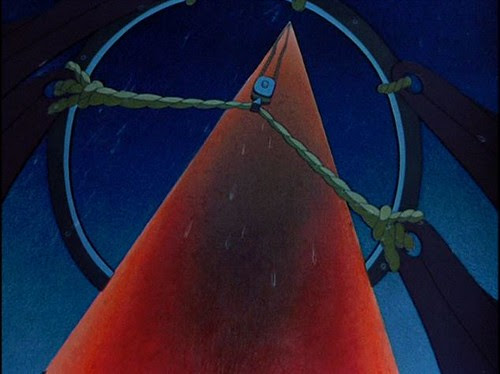 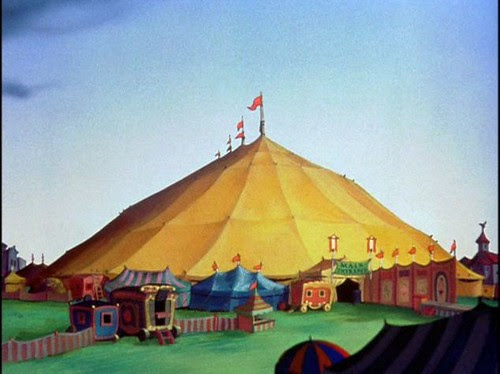 I’ll leave it as an exercise to the reader to judge whether or not to see Freudian undertones in a scene where females provide the power needed to erect a the Big Top.

How, in some detail, does Mrs. Jumbo get locked up for mad? A big-eared boy taunts her beloved Dumbo on opening day: 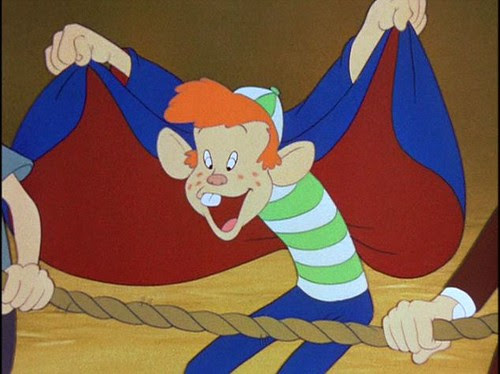 Then he lays hands on Dumbo and blows in his ear: 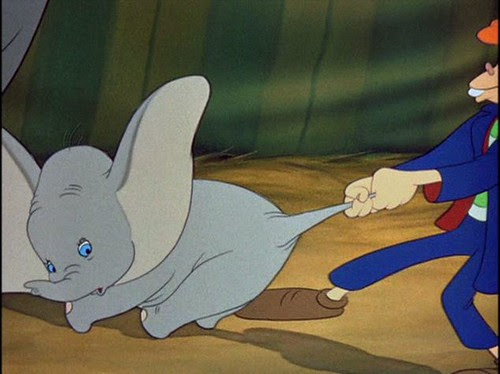 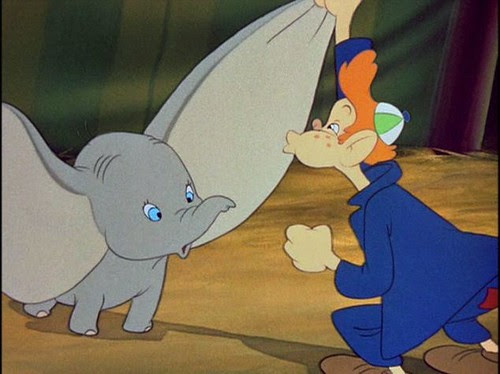 For that he gets spanked, as perhaps he should be, but not by an elephant: 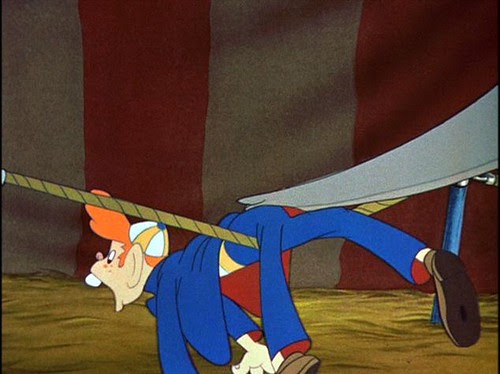 A line has been crossed. A human has been “attacked” by an elephant, the largest land-living animal. Somehow panic sets in, we don’t see just how or why. We just see people running and Mrs. Jumbo enraged: 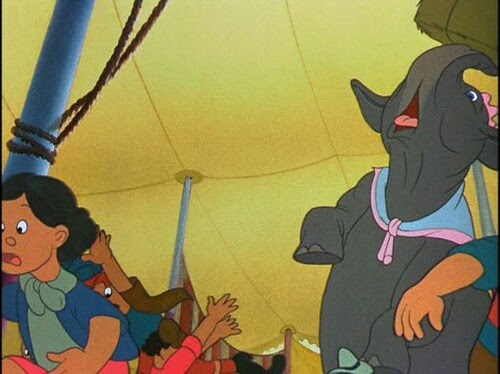 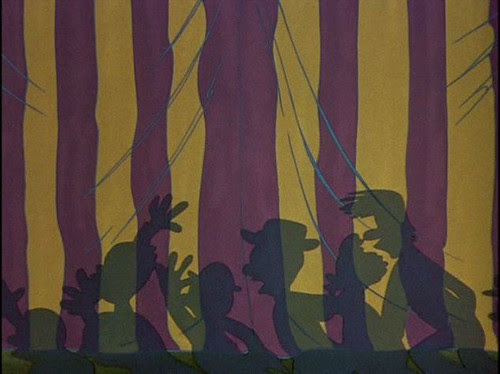 The ring-master enters, whip in hand, and starts cracking it. Handlers go after Mrs. Jumbo with ropes, to no avail. She just gets madder and madder and grabs the ring-master by the foot, lifts him in the air, and dunks him in a pail of water. The horror! The horror! 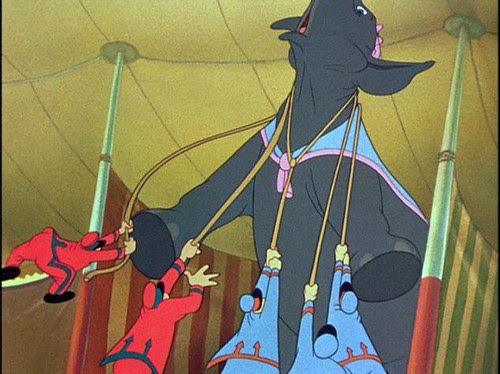 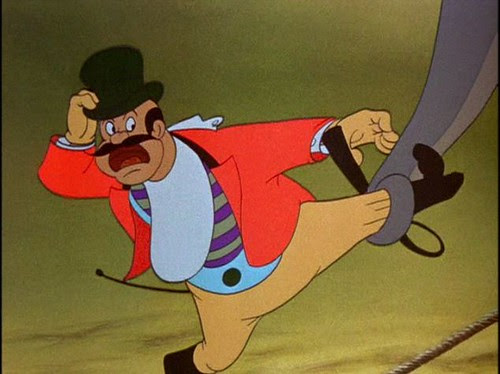 For this Mrs. Jumbo is locked in a cage: 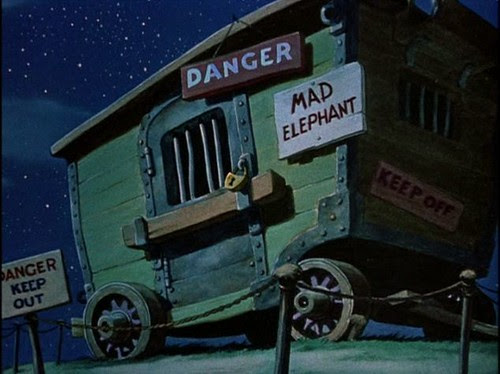 It’s in the aftermath of this debacle that Timothy Mouse befriends Dumbo. He sees the adult females shunning Dumbo and feels sorry for the little guy. He approaches them as they’re huddled in a ring, makes funny faces and noises, and they’re suitably scared: 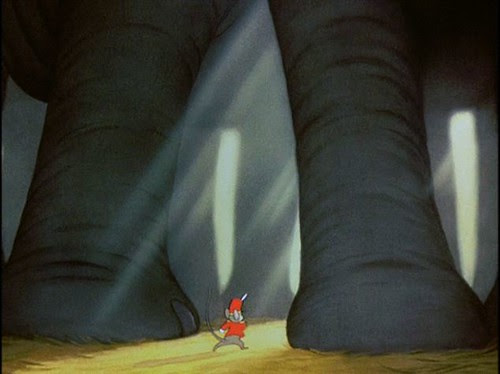 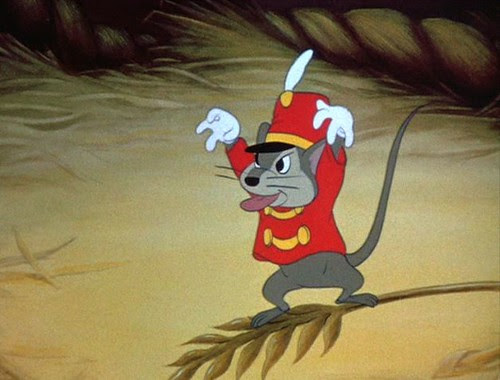 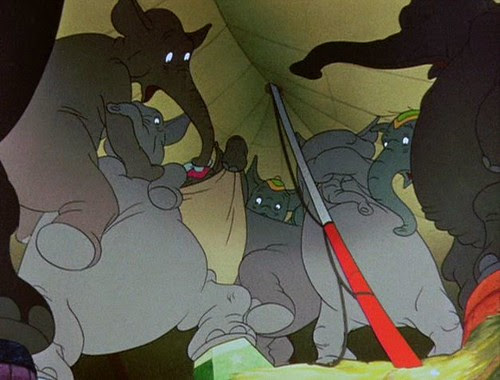 He castigates them for their churlish behavior—“Overstuffed hay bags!”—and then goes off to find and comfort Dumbo. In a scene that involves a good deal of physical play in which Timothy climbs on and over Dumbo, including down his trunk to stand on its tip, Timothy succeeds. Dumbo is feeling better.

Timothy has a brainstorm. He sneaks into the ringmaster’s tent while he’s sleeping (ringmaster at the right, the shadow is Timothy): 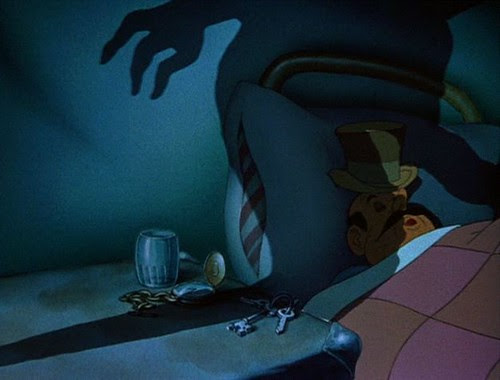 and implants an idea deep into his mind: “I am the voice of your subconscious mind, your inspiration, now concentrate.” 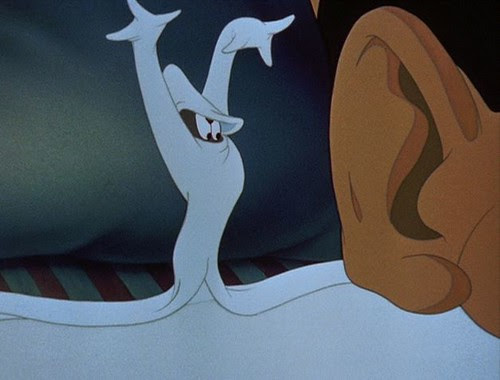 “Remember, your pyramid of elephants IS standing in the ring, waitin’ for a climax.” “Climax,” echoes the ring master in his sleep. 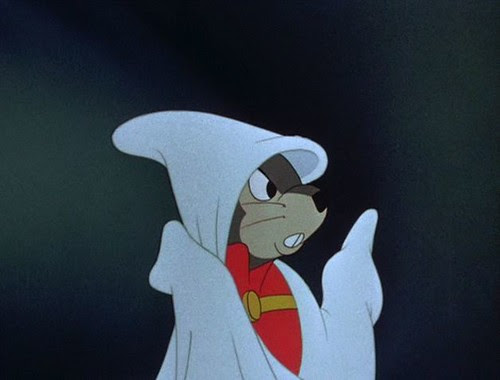 Timothy replies, “You are now getting that climax.” “Climax.” Timothy then goes on to explain his idea. Dumbo comes running into the ring, jumps from a platform to “the very pinnacle of your pyramid. He waves the flag for a glorious finish.” 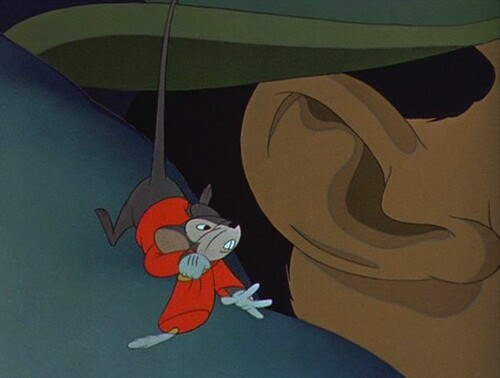 You get the idea. As Timothy backs out of the tent the ringmaster awakens with a great idea: “I got it! I got it!”

This seems to me rather an open invitation for Freudian speculation, but I’ll leave the details—about which I’ve not yet thought—as an exercise to the reader. While you’re working through them, remember that Mrs. Jumbo got locked up when as a consequence of her reaction to a boy blowing in Dumbo’s ear. Now Dumbo’s mouse companion is talking into the ear of the ringmaster, the one who ordered her locked up.

What becomes of this flash of inspiration? The elephants for the pyramid, a very shaky pyramid. Dumbo stumbles over his ears on the run-in and he crashes the pyramid. As it falls the top elephant grasps the center pole. It breaks and the tent comes tumbling down. At the very end of the scene Dumbo peeks out from under a patch in the tent and waves his little flag, as though in surrender. 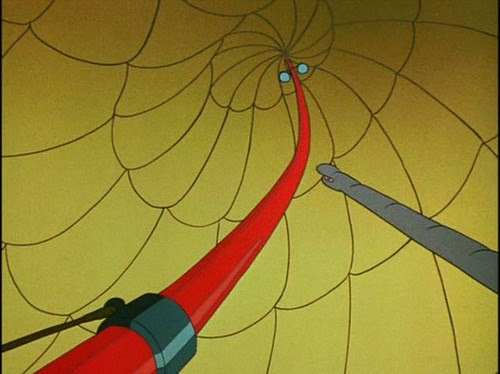 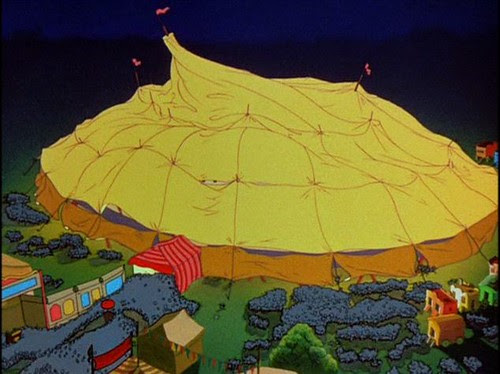 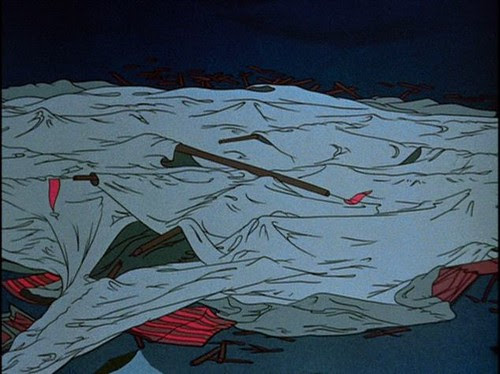 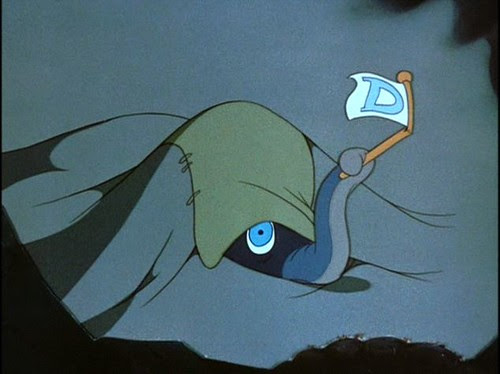 Think about THAT, the whole tent comes tumbling down, the reverse of the labor we witnessed in the tent-raising sequence where the roustabouts and elephants worked together. Now we see an infant male elephant fail in executing the scheme hatched by the ringmaster, the boss. Except that it wasn’t really the ringmaster’s idea. The idea was implanted into his subconscious mind by Timothy Mouse, Dumbo’s friend and scourge of officious elephant matrons.

The mind boggles at trying to unravel the causal loops.

And we’re not at the end, not by any means. The officious matrons ostracize Dumbo. Dumbo becomes a success playing the role of an infant rescued from a fire by the clowns. Note that, as the ringmaster was dunked in water by Dumbo’s mom, now Dumbo is dunked in some white liquid by the clowns. Timothy and Dumbo visit his mom in the clink. She sings to him. Timothy and Dumbo get drunk, inadvertently. Pink Elephants. The crows—remember, they’re Black. Dumbo flies.

Success. Dumbo’s a hit, he and his mother are restored to circus society.

Three things struck me this time through, not so much about the film but about working with the film:

1) How so very much can be conveyed so quickly and easily in this medium.

2) How easily it is to conflate one scene with another. I’ve watched this film many times, and studied it, and I still get things confused. In particular, I confused the scene in which Mrs. Jumbo dunks the ringmaster with the one in which Dumbo is at the center of an accident that brings the tent down.

3) How what seems like a limited thing in the mind can go on and on and on when you start to work it out in prose. This post wasn’t supposed to have all those screen shots and it WAS supposed to be more complete, with more space devoted to the crows. But, as I’ve already discussed them earlier...