Literature, Criticism, and Pluralism 3: The Reality of Fictional Objects

Once I began investigating Object-Oriented Ontology it didn’t take long to bump up against that claim that fictions too are real. At first I found that claim disconcerting, but then I got used to it. I had been reading OOOist thought through the standard notion that the real world is one thing, and fiction is quite different. Against THAT claim the OOO notion IS disconcerting.

That fictional objects have real consequences. That is to say, they are real objects, good and proper.

But is that so? Are they philosophically proper objects?

Consider Popeye, who seems to have become OOO’s paradigmatic example of a fictional object that is real. There’s nothing particularly problematic about any of the physical images of him, whether in print media or movie. They’re all real objects. And, while the psychological and neural processes that take place in the minds of people reading Popeye comics or watching Popeye cartoons are not well understood, they are not, as processes, any more obscure than those involving reading about George W. Bush or watching film and video clips of him.

And so we arrive at a problem I stated in From Objects to Pluralism and simply set aside, that of object autonomy. In that post I was worried about acorns and oaks: “…in what sense can an oak tree be autonomous if its very existence is dependent upon a proper environment?” Now I’m worried about fictional beings and their dependence on minds that construct them out of promptings from some material substrate.

This time I have a suggestion to make, but only a suggestion, one which I’ll elaborate in a later post. My suggestion is this: What matters about (real) objects is that they be sources of abundance. That a given object may depend on some substrate is no problem if the object absorbs and reconfigures the substrate in a new and open-ended way, as acorns and oaks do with the nutrition on which they depend.

And so, I submit, is the case with at least some fictional objects, the Real ones. But I want to take a look at some remarks by Harman before outlining an argument on that. He seems to have an other notion.


Harman on the Reality of Fictional Objects

Now, it’s not at all clear to me that Harman has any use for that imaginary Popeye, that one that’s an autonomous real object. Consider this remark from a recent interview:

A sensual object is anything that we regard as a sensual object. We ourselves are the judge of this, because there is no reality principle at work in the sensual sphere apart from what we regard it as being. As soon as I acknowledge Popeye walking around on screen, a unified character enduring through various motions and changes of posture, then Popeye exists as a sensual object. There is nothing “inflationary” about this, because I am simply saying that Popeye must be taken into account, not that there is a real man named Popeye.

All Harman seems to have is Popeye as a sensual object in a person’s mind. We could, of course, consider one person after another after another after another, and so on, one by one, but, as I will show later, that doesn’t quite give us a collective Popeye. It just gives us a bunch of sensual Popeyes, each in the mind of a different person. The Popeye that I’m positing is, on the othe hand, the creation of a group, a collective, but it is completely imaginary. You won’t find him out and about in the world where he might encounter, for example, George Bush, or even you.

And I suspect that Bryant is with Harman on this. In a discussion of this post, Texts are a Factory: Eileen Joy, Bryant says, in comment no. 20:

... there is no referent of the fiction Popeye as a being in the world that exists like Barack Obama. However, as a fiction qua fiction, Popeye exists (the fictional character that we find in comics, movies, cartoons, etc.). This is the material reality of Popeye, not the reference.

That’s not entirely clear to me, but I’ll take it as denying a collective imaginary Popeye.

Why, then, would I want to posit the existence of a genuinely collective Popeye? For one thing, people do talk about imaginary creatures as though they were real, and make up new stories about them, just as they relate new incidents about real people. And not just ordinary people, literary critics also talk about imaginary characters as though they’re real. If nothing else, it’s easy and convenient to do so.

This common practice, this convenience, of course doesn’t in it self make it philosophically prudent to grant reality to such beings, yet . . . Consider this passage that Tristan Haze (in the discussion of Bryant’s Factory post) quoted from article on Possible Objects in the Stanford Encyclopedia of Philosophy:

We make various assertions about fictional objects outside the stories in which they occur and some of them are true: for example, that Sherlock Holmes is admired by many readers of the Holmes stories. The simplest and most systematic explanation appears to be to postulate Holmes as an actual object possessing the properties such true assertions ascribe to him. Fictional objects may then be said to be theoretical objects of literary criticism as much as electrons are theoretical objects of physics. This type of view enjoys surprisingly wide acceptance. (Searle 1974, van Inwagen 1977, 1983, Fine 1982, Salmon 1998, Thomasson 1999). The theorists in this camp, except van Inwagen (van Inwagen 2003: 153–55), also think that fictional objects are brought into existence by their authors as actual objects.

I do find that view quite attractive and I’m certainly glad that others agree on this matter. Yes, I want to posit fictions as existing a separate Realm of Being and treat them as real in that Realm. And I can offer an argument for doing so, one grounded in a subtlety in social life.

Mutual Knowledge in a Collective

Game theorists like to distinguish between shared knowledge and mutual or common knowledge (see this post for a bit more than I have here). Consider the old story about the Emperor’s New Clothes. As you may recall, the suit was to be woven of special cloth that is “is invisible to those unfit for their positions, stupid, or incompetent.” When the Emperor steps out in public for the first time people see that he is naked.

That is shared knowledge. The Emperor is in fact naked and everyone sees this. But they say nothing, for they know the valuing of indulging the Emperor in his beliefs.

I propose that fictional beings that are the basis of mutual knowledge in some collective (Latour’s term) are real objects, not just sensual objects. It’s their mutual existence among people in the group that constitutes the felicity condition (to use Latour’s phrase) for their real existence. Such mutual knowledge cannot be construed as the “sum” of individual sensual objects. All that gets you is shared knowledge. It’s when everyone knows that everyone knows, that’s when the fictional object becomes real in the Fictional Realm.

Popeye is real in that way. He exists in the Fictional Realm along with Perdita, Baba Yaga, The Green Knight, Luke Skywalker, Heathcliff, Dumbo, Chihiro, Anansi and hundreds of thousands of others. These characters are, in fact, the collective product of many people reading and thinking and viewing many physical texts. These characters are thus productive, they are sources of abundance.

To accommodate this insight I have to augment the account of naturalist criticism I gave in my two previous posts in this series (Literature, Criticism, and Pluralism, and Literature, Criticism, and Pluralism 2), where I talked of the Literary Realm rather than the Fictional Realm. In those discussions I talked only of computational psychologies and they, like almost all psychologies (with the exception of social psychology) are implicitly or explicitly about individual minds. They are not about collective process.

But that’s precisely what I’m claiming about the reality of fictional characters, that they are real through a collective, a social process. Without going into a detailed explanation of why I’m doing so, I will call that process by a standard term: cultural evolution. Cultural evolution deals with the circulation of ideas, attitudes, norms, practices, and so forth in groups and how that circulation behaves over time; things may change or they may be stable. In either case, the process is collective.

So we have a revised diagram for naturalist criticism, one in which both computational psychologies and cultural evolution provide conceptual support: 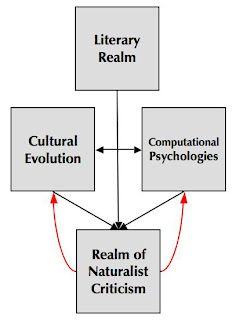 The Realm of Computational Psychologies deals with processes in individual minds and brains while that of Cultural Evolution deals with collective processes. The Realm of Naturalist Criticism must have access to both. And it will provide problems and phenomena to be considered by each.

We are deep on a preliminary exploration of ontological pluralism, the idea that the universe unfolds into multiple Realms of Being, each with its own felicity conditions. In From Objects to Pluralism I argued that, in the striped-down version offered by Graham Harman, object oriented ontology provides the basis for constructing Realms of Being from objects and the relations among them. Where some large population of objects display a consistent and stable pattern of interrelationships we can say that they exist in a particular Realm of Being. Over time our cosmos has evolved from one Realm to many and may well further evolve.

A new Realm of literary study is now emerging that I’m calling Naturalist Criticism. It draws on the Literary Realm (as do Academic and ordinary Literary Criticism) and on the Realm of Computational Psychologies. In this post I’ve added a Realm of Cultural Evolution to that. At the moment the profession is trying to figure out whether the would-be critics are just offering new interpretive engines or whether or not they’re up to Something Different. Many of them are wondering the same thing. 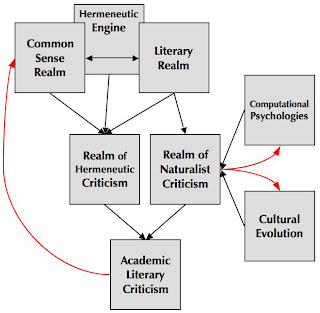