A Community Garden Builds Itself

Not, mind you, that the rocks just up and cleared themselves out of the way, nor did lumber arrange itself into planter boxes, much less did the dirt leap into the boxes followed in close order by seeds, seedlings, shoots, and sprouts. Nothing like that. But the garden wasn’t planned by spreadsheet and Gant charts, nor was it built by highly organized teams working against the clock, on time and on budget. Fact is, if you’d been on site any Saturday—and a few weekdays here and there—from mid-April through May and into mid-June it’s not clear to me just what you’d have seen. And I was there. It all depends on just when you showed up. You might have seen people building things, planting things, watering the plants, and painting the wall. But you might have seen some women and girls tossing rocks over a wall, or a young boy burying himself to his neck in a mound of dirt, or a middle-aged man taking photographs of a plush-toy frog lounging in the lettuce, or men women boys girls and dogs chillin’ around the barbecue listening to hip-hop and Rnb on the radio.

Not a high-energy task-oriented workforce at all. But they built the garden. We, we built the garden—I’m the guy who photographed the toy frog. Also shoveled some dirt. And ate some barbecue.


This and more happened on Pacific Avenue near Commnipaw in the Lafayette neighborhood of Jersey City in the Spring and early Summer of 2012. Come to think of it, not far from where Henry Hudson first set foot in the New World in 1609. The Lafayette Community Learning Garden. 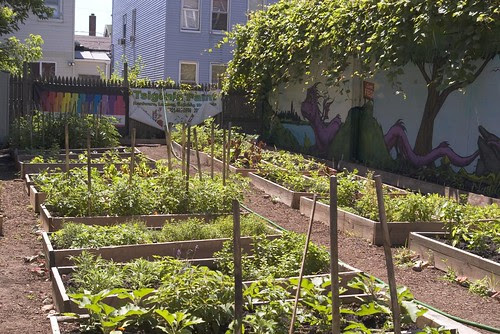 I really don’t know how many people have been involved so far. The project was dreamed up by June Jones, President of Morris Canal Community Development Corporation. I’m sure she made a lot of phone calls, button-holed lots of people here and there, in order to make it happen. After all, someone had to convince the land owner to allow the community to build the garden; someone had to talk with local merchants and businessmen to secure donations of lumber, plants, gardening materials, and paint (for the mural); someone had to get the City to deliver topsoil; someone had to get the Incinerator Authority to donate the use of one of its cherry pickers so the artists could get high up on the wall; and someone had to do this that and the other thing. I’m guessing that June Jones played a lot of those roles.

Of course she had help. When we showed up that weekend early in April Musaddiq Ahmad, a local contractor, had already built some of the planter boxes and Dylan Evans, of Mad Mad Media, and Cloy Pi, of Green Villain, had arranged for Mr. Mustart and other graffiti writers to execute the mural. Calvin Palmer, a master gardener trained at Rutgers was there to give guidance and encouragement—“outstanding” seems to be his favorite word (ex-military, don't you know).

And people just came, pitched in, and things got done. More planter boxes got built and hauled into place. Dirt was shoveled around here and there. Have you ever seen a six-year old girl grab a wheelbarrow full of dirt mostly, I suppose, to prove to herself that she could do it, and to show her friends and neighbors that she’s a good citizen? 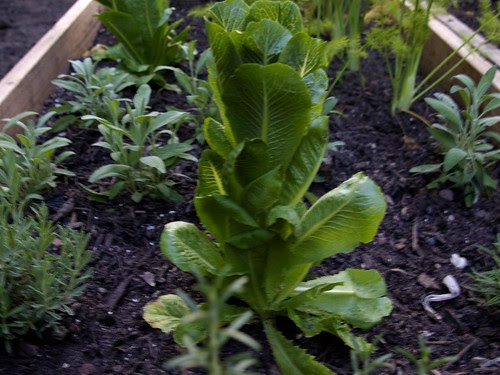 Plants: cabbage, lettuce, peppers, corn, collard greens, aloe, potatoes, blueberries, strawberries, garlic, scallions, basil, and more. They didn’t just up and walk into the planting boxes. Someone had to put them into the earth. Dig holes, lower the young plant, or place the seed, move the dirt back into place, and pat it down. Secure. Some of these planters were experienced gardeners, and some may never have seen a garden before. Youth, you know, but also city living.

This didn’t all happen in one weekend. Four five six weekends, now more. Maybe 50 or 60 people that first day. Some already knew about the garden, others just noticed it as they walked by. Some came by for the hot dogs and hamburgers. The graffiti mural attracted a lot of business: A New Jersey State of Mind. Big colorful letters, the Statue of Liberty, and a purple dragon slinking along. I just looks good. 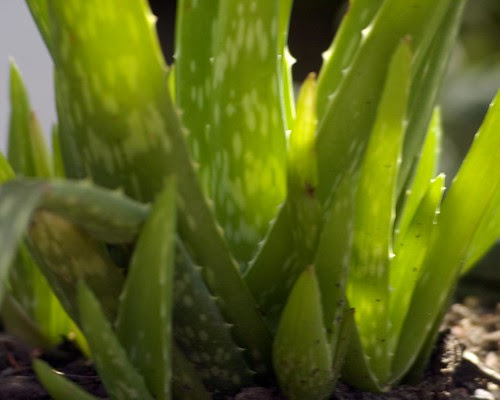 The Grand Opening, June 1st, was indeed grand. The garden wasn’t quite done, but then it still isn’t, not quite. But the plants were looking good, the politicians were on their best form (three councilmen that I counted), some folks in the neighborhood provided music. And some other folks provided, of course, food.

The real harvest, of course, is the community itself. The people met, friends made, the new ideas, and plans. The neighborhood. 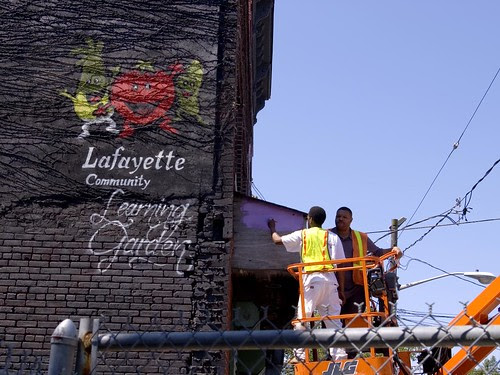