This may take awhile. After explaining my change in plan for this series I wade into phase space, complete with pictures illustrating an example of my own. What’s that got to do with the digital humanities? Easy: the search for hyperobjects. I then affirm Morton’s characterization of mathematics and conclude with a passage from Bethany Nowvitskie. 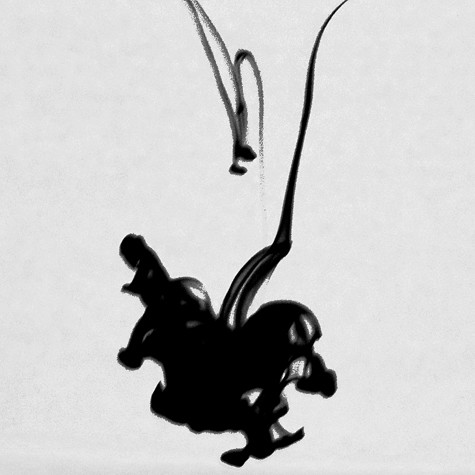 First, a change in plan

I’d planned on writing a commentary on each chapter, in order, with supplements. But the previous installment took more time than I’d expected. If that’s how things are going to go, then I don’t have time to follow through on that plan.

So, I’m skipping commentary on the “Temporal Undulation.” That means I’m not going to get to puzzle over Gaussian time and Einsteinian reference mollusks (the Wikipedia entry on Time fields in general relativity is useful here). But I’ll leave you with a two snippits.

From page 64, in his discussion of the Gaussian nature of hyperobjects: “The contemporary philosophical obsession with the monstrous provides a refreshing exit from human-scale thoughts.”

Concerning an example from the Islamic philosopher al-Razi, “Ignore the wrongness of this supposition, because it’s irrelevant” (p. 66). That’s good advice I find myself applying to Hyperobjects here and there.

Let’s skip to the next chapter, “Phasing,” where I want to concentrate on Morton’s definition of phase space and his account of math.

Morton defines a phase space as “the set of all possible states of a system” (p. 71). OK. But what does that mean? How do we work with such an object? How can we visualize it?

Let’s consider a system that’s somewhat smaller than earth’s weather system, the example Morton himself gives, and look at it with some care and a bit of detail.


Take a small tumbler, fill it with water, let the water settle, and then put a drop or two of ink into the water. Let the ink diffuse until it appears to be evenly dispersed throughout the volume.

Here’s a photograph of such a system at an early point in its evolution: 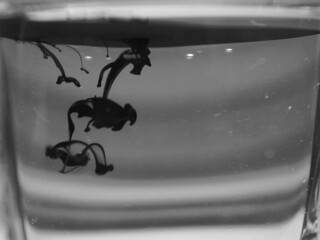 Think of that photograph as a description of the system, one that flattens (projects) its three spatial dimensions into two. Each pixel thus represents a relatively long and narrow volume in the 3D system with the state of that entire volume being represented by the value of that one pixel.

The original of this photo measures 2670 by 2003 pixels making a total of 5,348,010 pixels. Think of that as a two-dimensional measurement of the evolving system taken at an “instant” of time. We now want to create a space in which the state of that entire system can be represented by a single point. That’s our phase space.

So we create a space that has a dimension for each of those 5,348,010 pixels. That is a so-called high dimensional space, much higher than the 3D physical space through which we move in everyday life. A single point in that space then represents the state of the system at a single instant.

So, we take a photograph at each instant and plot it in the phase space. That point collectively represents the value of each pixel in the photograph. If you wish, use Morton’s metaphor of the octopus, except that this one has, not eight tentacles, but 5,348,010. The body then represents the plotted point, where all the tentacles meet.

Now, this space, with as many dimensions as it has, is still a pretty poor proxy for the real space. Each pixel is, in effect, a “smear” of billions upon billions of molecules. And we really need six dimensions for each particle, three for position and three for momentum. But this is sufficient to give some intuitive sense of complexity and of the strangeness of these conceptual objects, these phase spaces.

Let’s look at some other photos of that system as it evolved: 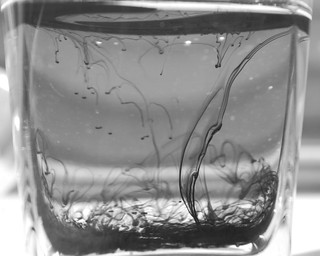 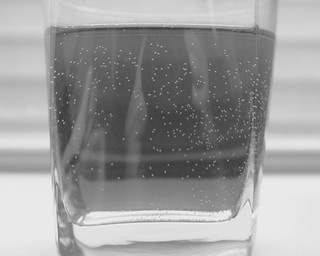 The sequence of states a system occupies during its evolution is called its trajectory. That trajectory can be visualized by projecting it into a 3D or 2D space. In the next image I show what such a 2D projection might look like for this system: 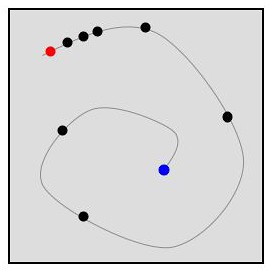 Note that I do not in fact know what that trajectory would look like in 2D projection. I made this image purely for illustrative purposes. The nine points represent the nine photographs I took (of which I’ve shown only three here; you can see all of them in this working paper, A Primer on Self-Organization). Each represents a single microstate of the system, all zillions of dimensions. The red point is the first photograph while the blue point is the last.

The light gray line represents a WAG (wild-ass guess) about the whole trajectory. Whether or not it’s correct is irrelevant. What’s important is that there IS a trajectory and the phase space gives us a way to think about it, analyze it, and even visualize it.

Now, you were to perform this little demonstration many times, it would become evident that, no matter where the ink was dropped into the tumbler, the final state would always be the same. The different trajectories might be somewhat different in character, but the final point is always the same. That final point is called the system’s attractor.

The name is unfortunate as it suggests that there is something THERE that is ATTRACTING the system to that state, like bees to honey or iron files to a magnet. There isn’t. Nothing is attracting in that way; there’s nothing attractive about that point. It’s just that, given the internal dynamics of the system, that’s how things work out.

A metaphor that’s commonly used is that of releasing a small ball into a basin from the basin’s edge. No matter where you place the ball on the edge of the basin it will always roll down the side to the center. The center is the attractor. Given their positions in the earth’s gravitational field, the basin and the ball interact in just THAT way, and the ball ends up at the bottom of the basin every time.

Here’s Morton on attractors (from the “Interobjectivity” chapter, p. 891):

It is hard to think an attractor as the precise opposite of a telos, a destiny or destination or end. but this is exactly what an attractor is. An attractor does not pull things toward it through time. In this sense, attractor is a misleading term. Rather, the attractor radiates temporality from the future into the present.

I’m not sure I follow radiating temporality. It would seem that it’s of a piece with time (and space) emanating objects, a formulation I rather like, giving us time emanating from the basin and the ball. But the attractor of that system, while physically real, is also of a different order. It’s abstract. You can see and touch the basin and the ball, but you can’t see the attractor, not directly. But you CAN create a mathematical model, run it on a computer, and visualize the attractor on a scrap of paper. The well-known butterfly-shaped Lorenz Attractor, which Morton reproduces (p. 71), is such a visualization.

If you will, such visualizations are the ink behind which the octopus escapes, to repeat one of Morton's favorite figures.

What’s this have to do with digital humanities?

So far as I know, digital humanists have not yet employed the mathematics of phase spaces. But high dimensional spaces are ubiquitous in big data. As are visualizations of the data in those spaces.

Think of the data as being descriptors for the collection of texts in a database. Considered as a single entity, that collection is a hyperobject that’s standing as proxy for something like the “collective mind” or “world spirit” that “lived” through those texts. The visualizations are descriptions of that spirit.

But wonderful as well.

What is significant here is that we are dealing with the inverse of a view that says that mathematizable entities underlie other entities. On the view this book is advocating, the object subtends the mathematical forms.

A hyperobject exists for us as a map in a high-dimensional phase space, because it is impossible for us to grasp a whole with our senses. But this means the opposite of a Platonism that says that mathematical relationships underlie things. It only means that the mathematical as such is mathēsis, which is a Greek term that comes close to the Tibetan gom, the term for meditation. Gom and mathēsis both mean something like “getting used to,” “growing accustomed.” Mathematics in this sense, beyond number, is the way the mind acclimatizes itself to reality.

OK. There’s more than one way to skin a cat, as the expression has it. Morton continues: “The diagram is the caricature, not the leering clowns.”

Oh snap! There he goes again, privileging one expression over another for no particular reason.

An Age of Sincerity

Let’s leave the last word to a digital humanist, Bethany Nowvitskie. Here’s a passage from her DH2014 keynote, Digital Humanities in the Anthropocene.

Next, big data and the longue durée. If it’s true, as Rebecca Solnit writes, that people are bad at “looking at the biggest things” in this, our “age of inhuman scale”—a concept Timothy Morton theorizes through “hyperobjects”—ineffable, natural and computational entities (like global warming) “massively distributed in time and space” (37-9)—then DH has a public and transformative role to play. For Morton, grappling with hyperobjects can lead to a new “time of sincerity, that is, a time in which it is impossible to achieve a final distance toward the world” (44). Jo Guldi gets at this when she narrates “how information won’t (and will) save the climate”—describing her meetings with a dozen grassroots mapping efforts in India, and calling for “an information architecture stamped with participation” and informed by history. “Mapping, code, and data collection [she writes] must be allied to a sense of memory.” It’s a powerful reminder to those of us positioned to pit data design and visualization against what Guldi calls “information overload, the corruption of privilege, and the inefficacy of expertise.” David Armitage joins Guldi in another essay, historicizing the recent narrowing of temporal scope by Anglophone academic historians, and describing how advances in distant reading and mass digitization make a “Return to the Longue Durée” (the title of their article, available in French and English) not only technologically feasible, but politically imperative and deeply restorative for the humanities writ large.