Throw It All Away: American Heartache Sick of Society 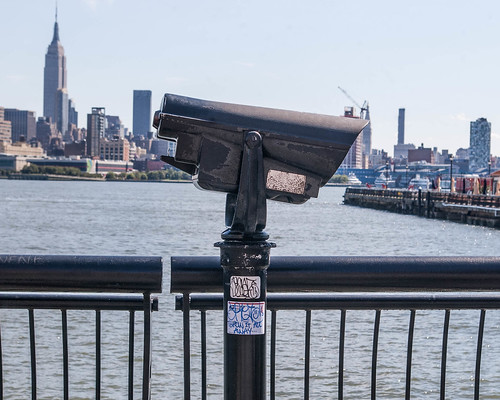 It started with an email to Jon Naar: Let’s meet. Naar, as you may recall, did the first book on graffiti. He took the photos back in '72, found a publisher, and his publisher coupled him with a writer, Norman Mailer. Cay 161 gave Mailer a truth, “the name is the faith of graffiti,” and from that truth a book title was born: The Faith of Graffiti. The book went on to become the “bible” of graffiti.

In his reply, Naar copied graff writer EKG. In my reply to both, I told them about American Heartache, a nice sized roller in an abandoned building in Jersey City: 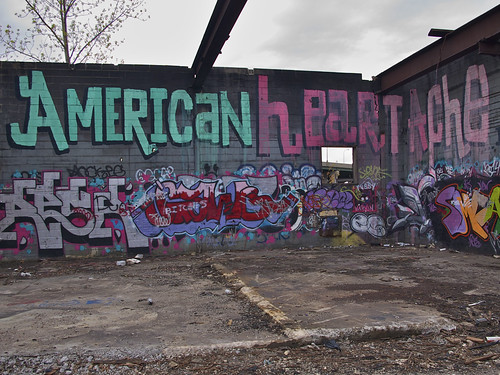 EKG says, that was by Droid907, I’ll let him know. Thus it was that I got an email from Droid907 asking for a mailing address so he could send me his latest book. A day or two ago the book arrived in the mail: Sick of Society, a collection of fisherman’s tales and doctored photographs. And with it, three stickers and a decal: 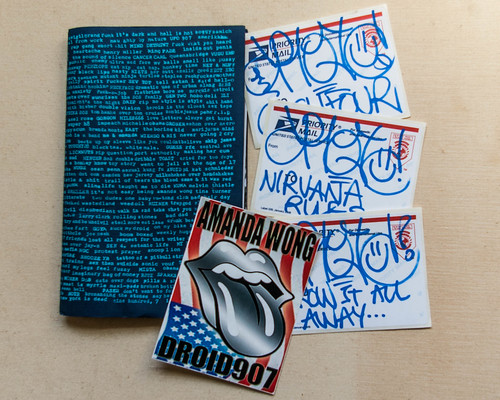 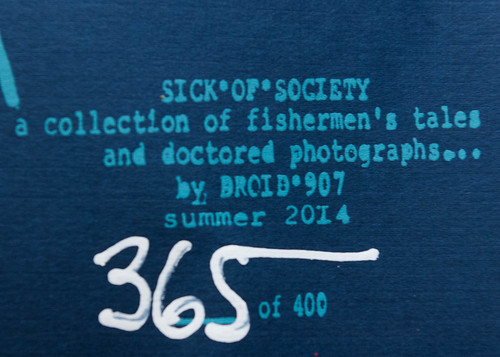 Zines have been around at least since Plato. That’s not what they called them in ancient days, but that’s what they were, artisanal books, hand crafted and NOT hot off the presses. There were no presses back then, just scribes, writing away, one at a time. Zines aren’t scribal, but you know a human hand touched each page. 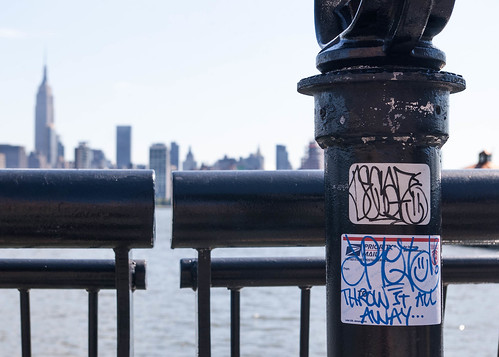 Up until not so long ago, a zine is what you did when you wanted to get the word out but weren’t mainstream enough to attract a legit publisher and didn’t have trust fund money or stock options to cover the cost of self-publication. Photocopiers, mimeographs, silk screen, and staplers, that’s how you worked. Type the pages yourself, lay them out, photos here and there, copy and staple. Small runs, obscure distribution networks.

In these days of the internet and cheap print-on-demand anyone with modest computer skills and a decent eye can lay out a slick book and have it bound in boards or paper, looking ‘professional’, looking commercial. Now the artisanal zine is a deliberate choice & probably more work than slick print-on-demand.

For want of a better word, authenticity.

What a concept! Authenticity. In a world where Coca-Cola tells us “It’s the real thing” damn near anything can be faked. Including especially authenticity. But then, when Coke Labs cooked up a super-slick better tasting New Formula, the people rebelled, didn’t they? Didn’t want this new-fangled improved scientifically engineered Coke. Damn if there wasn’t a ‘real thing’ in the world of Coca Cola and the company missed it by a mile.

I KNOW Sick of Society is the real thing. How? Because this: 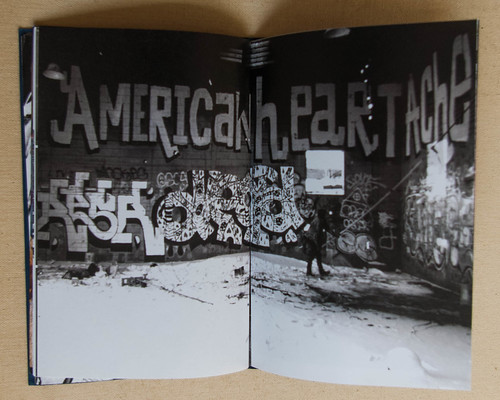 That’s the “American Heartache” roller I flicked earlier this year. Notice the snow on the floor, so we know it’s winter and, if I didn’t know the building was falling down because I’ve been there, well then, you could infer that because how else would there be snow on the inside? And it’s late afternoon, too. See that bright square below the “ea” right of center? That’s a window. If you look immediately to the right you’ll see where light streams through that window and hits the wall under the “ch.” the sun has to be low in the sky for the light to stream through and that window’s on the west side of the building so it’s got to be afternoon, not morning.

Technically, it’s not much of a photograph. But that’s surely deliberate. Maybe it’s one of those doctored photographs. Truth in labeling.

And then there’s the man with the roller–Droid907? So this is a photo of the process unfolding. And that brings us to Mana Contemporary, where their “mission is to display the art-creating process and the people behind it.”

Went to their open house last Sunday (14 Sept 2014). I was particularly impressed with the 5th floor exhibit of George Condo (from the Pellizzi Family Collections) but not so impressed with the Sante D’Orazio Priests series. The Condo is authentic, the D’Orazio is high-class kitsch.

The concept is simple: photograph your artist friends dressed up as priests. But what’s the point? The concept is so obvious as to be uninteresting, at least in D’Orazio’s execution, large (4 or 5 feet) beautifully done B&W prints. The man takes technically excellent photographs. Big deal. Black and white, how arty. Now if he’d taken on the challenge of doing them in color, he’d have had to really work to get something out of his subjects. As for those subjects: Damien “jump the shark” Hirst? Jeff “my pretty balloons” Koons? Gimmie a break! Better yet, gimme' a Coke Classic, the Real Thing. 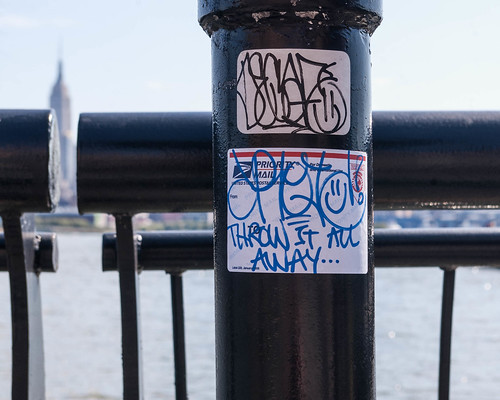 From Sick of Society:

"whats going on back there?" an old security guard from the XXXXXX building demanded to know, shining his mag light into our faces from the other side of a tall cyclone fence. "do you have permission to be painting back there?" "yes." UFO answered. "from who?" the guard played along. "just letting you know, im calling the police." giving us the heads up. as he turned to get on his cellphone, i approached the xxxxx fence to plead with him. "hey man, im not trying to stop you from doing your job, but if you just give us twenty more minutes we will cover up all this shitty graffiti with a really beautiful piece. theres like swastikas and bullshit on this wall. let us cover it up and we will leave, promise. no problems." the guard shined the light up at our piece and back in my face. "alright ill be back here in a half hour, if you are here youre going to jail. just finish up and be quiet." and with that, he vanished back into the bushes, and we finished up.

If you want a copy, take yourself over to Carnage NYC. $18.00, edition of 400 copies, and you get three hand-drawn stickers too. 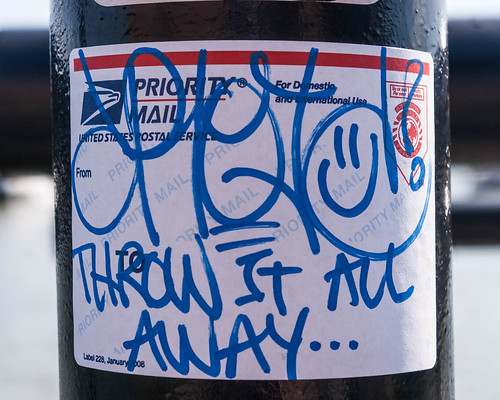 For connected courses folks. I don’t currently teach, haven’t taught in years. But THIS is why I’m going to teach. Graffiti is the most important movement in the contemporary art world. Taken together with street art, they are laying the foundations for a 21st century transnational artistic culture. Can you get a college or university course that lays it out like that? I bet not or, if so, only here and there. So, starting early next year I’m going to host an online floating seminar for those who want to begin working it out. We’re going to examine graffiti and street art in the context of world culture: cave art to the future!