Connected from Birth: You, Your Double, and Cyberspace

This session will explore the IndieWeb movement as a people-centered response to the corporate web. How do the core IndieWeb principles of owning your content, remaining better connected, and putting you in control intersect with values of connected learning? Tune in and find out.

For my money the key statement comes at roughly 44:48 when Simon Thomson observes:

What really excites me is that we have the potential here to get students to start at school. The idea behind this concept is that they could begin to build their digital online space when they're at school; take it through the whole of their educational experience and into their life, without having to move platform, to create a new login for this academic environment, to create a space for this environment. You could have just this one place where you just aggregate your conversations, collect your information.

You start in primary school, K12, you move up through secondary school, and then you go to university and they just say “Hey, yeah, bring that with you, connect it to what we’ve already got.” And you just continue that. I think we’re really at the cusp here of where that is really achievable. I don't think we've ever been there before.

So lets go back to the beginning and build up to it. Rather than attempt to rehash the conversation, referencing who said what, I’m just going to go straight to it.

We start with learning management systems (LMS), which, as people have observed throughout the workshop, are built for management, not learning. One problem here is that, when the course is over, the online record is shutdown, never again to see the light of day. The student has nothing to build-on.


That changes as soon as you move the course to the open web using commonly available platforms, such as Word Press. In the first place, the student is no longer writing (or producing other media) just for the teacher. The student is addressing the whole class and, beyond that, the open web. Second, once a given course is over, the online material can stay in place and the student can reference it and build on it. This is particularly easy if each student has his or her own domain name and blog.

For many students, however, that blog will be just one more online venue they’ve got to track. A student may already have accounts with Facebook, Instagram, Twitter, and who knows what else. Now they’ve got to fold the blog from Take-Over-the-World-101 into the mix. What a drag.

Along comes software like Known, which allows you to consolidate your online production into a single footprint. For me that would be 1) five blogs, three individual and two group, 2) Facebook (which is actually multiple identities as I manage pages for others), 3) Flickr, 4) three document repositories (Scribd, SSRN, and Academia.edu), 5) Twitter, 6) Linkedin, 7) Youtube, 8) Myspace (dormant), and 9) there’s probably something else that I’ve forgotten. It would be nice to be able to publish to all those spaces from one space and to track activity there from one space. As it is I’ve got a daily routine where I check my high-use spaces regularly. But getting it all in one place...

Jim Groom notes that it changes your attitude toward what you produce. It sounds to me like a Gestalt switch: 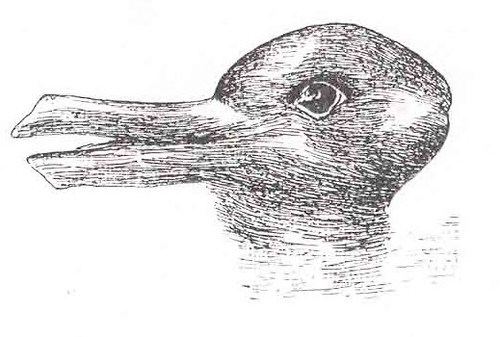 You know, looked at one way, it’s a duck; another way, it’s a rabbit. Now I produce and consume content for each space individually. If I worked through Known I’d think of the content first, and then secondarily, I’d think about which space I want to push it into. Actually, I do a bit of that already, choosing among one of the blogs, Facebook, or Twitter for some content.

So, now we’ve got all of our online production consolidated into a coherent system. That brings us back to where we began, with Simon Thomson’s vision of establishing an online identity in kindergarten, maintaining it into and through primary and secondary school, on into higher ed, and out through final graduation into life in general. To which Jim Groom added all the other online stuff that’s out there but not under our direct control: medical and dental records, insurance information, traffic tickets, and so forth. Getting control of THAT is not merely a technical problem, as Jim noted, but a political one as well.

Once that is in place, or as it slowly comes into view, it will become obvious that our current “ladder” system of education, with fairly strict age-segregation by individual grades, will be increasingly revealed as an arbitrary and somewhat destructive construct. As that melts away along with the distinctions between an early period of life where you get educated, which is then followed by work life, and then retirement, when those distinctions disappear, we may be in a whole new world.

The emergence of such a world is not, however, inevitable, as it moves against the grain of the institutional framework laid down in 19th century Europe and North America, and that’s the dominant institutional framework in the world today. That, however, is a whole different discussion, one that leads me to think about India as a crazy fragile multi-cultural democracy, and about Africa as who knows what but anyhow the Nigerian film industry is the third largest in the world by revenue, second by number of titles annually, and it’s almost entirely digital.

I leave you with this: When a child is born, they’re given an identification number (Social Security in the US) and an online hub. Initially, the child’s parents or guardians will administer the child’s online hub. In this world, the primary coming-of-age ceremony will then be the transfer of legal responsibility for that online hub from parents to child. Think about the legal, institutional, and ritual requirements of THAT.