Rereading Goethe’s Faust 3: Echoes of Fantasia and Mysteries of the Cosmos

What is this knowledge that Faust seeks?

Still on reset. The quick read-through that I decided upon last post has yet to happen, though I’ve gotten a bit further into the text, and there are hints that something like a quick read might just change my relationship to the text.

Still, I’ve got some things to say.

Continuing from last time, I raised the question of just what is going on that Goethe needs to frame his story with a conversation between the Lord and Mephistopheles, a device he took from the Book of Job – something his audience surely would recognize. That connection alone tells us this is to be no ordinary story. Let me quote a passage from an old essay I wrote about Disney’s Fantasia:

In 1976 Edward Mendelson published an article on “Encyclopedic Narrative: From Dante to Pynchon” (MLN 91, 1267-1275). It was an attempt to define a genre whose members include Dante’s Divine Comedy, Rablais’, Gargantua and Pantagruel, Cervantes’ Don Quixote, Goethe’s Faust, Melville’s Moby Dick, Joyce’s Ulysses, and Pynchon’s Gravity’s Rainbow. Somewhat later Franco Moretti was thinking about “monuments,” “sacred texts,” “world texts,” texts he wrote about in Modern Epic (Verso 1996). He’d come upon Mendelson’s article, saw a kinship with his project, and so added Wagner’s Ring of the Nibelung’s (note, a musical as well as a narrative work), Marquez’s One Hundred Years of Solitude, and a few others to the list. It is in this company that I propose to place Fantasia.

There we have it, in the middle of that paragraph; Faust is an “encyclopedic narrative” in Mendelson’s terms, a “world text” in Moretti’s. It seeks to tell of, to embrace, the whole of the cosmos, and that is a very strange thing to attempt on any terms.

And that ambition is why, I would imagine, Goethe did not attempt to tell this story in novel form. As a formal device, novels are grounded in history, in the flow of events in real time; and furthermore, in the flow of events as seen by a particular narrator. Notice that the oldest novel on Mendelson’s list in Moby Dick, written a few decades after Faust. It’s as though the requisite novelistic technique didn’t exist in Goethe’s time. And, considering all that Melville had to invent and least harness to novelist use (e.g. the tedium of naturalistic cataloguing and exposition) it just barely existed in his time – which wasn’t so far from Goethe’s, though the two texts seem – at the moment at least – a universe apart in sensibility.

So, given his subject, his ambition – he was to work on this text for most of his life – Goethe couldn’t write a novel. He had to choose another form. Had film been available to him, that’s probably what he would have chosen. It would certainly have appealed to his polymath’s sensibilities. Instead, he chose the closet thing he could get to film, the theatre. And he opens his story – once the preliminary throat clearing [Jester, Manager, Poet] is over – with a conversation between the Lord and Mephistopheles from a place long ago far away around the corner in the future. They, or at least the Lord, is above it all, which is where you need to be to present the cosmos.

Which brings us to Fantasia, another of these epics that aims to present IT ALL. No doubt this juxtaposition of a great literary work, one central to The Western Canon! with a feature-length cartoon for kids of all ages, no doubt that’s a bit jarring. I can’t help that. Uncle Walt would have taken it in stride, and so, perhaps, would Cousin Johann.


I won’t reprise the argument of that first Fantasia essay, that Disney’s film encompasses the cosmos – it is, after all, easy enough for you to link out to it. But there is a much more specific connection between the two texts: One of the episodes of Fantasia is based on a text by Goethe.

I refer, of course, to the episode about a sorcerer and his apprentice, about which Goethe wrote a poem: Der Zauberlehrling, in English, The Sorcerer’s Apprentice. Here’s the sorcerer: 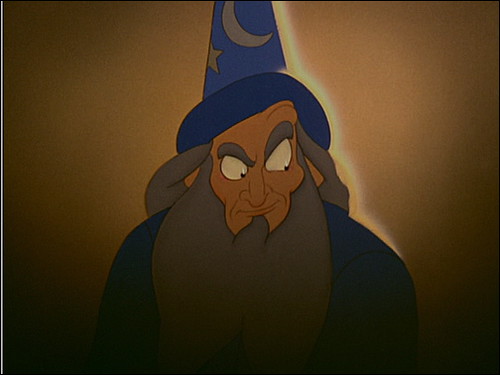 Faust? Well, no. In the studio he was known as Yen Sid, which is “Disney” spelled backward. And Disney did create Fantasia, which is a very Faustian thing to have done. Creating Disneyland, a theme park embracing [if you can call it that] the world, Faustian as well. 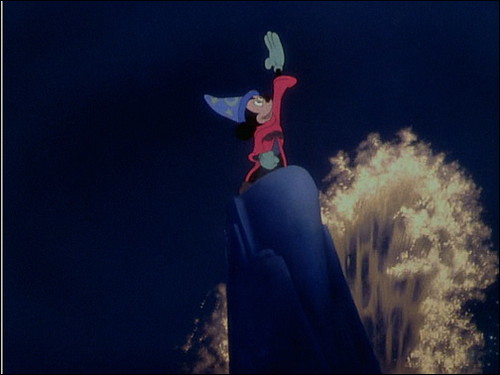 Yes, oh most definitely yes. And did you know who voiced Mickey?

!!! And I suppose you’re doing to tell me they’re all Chernobog as well. 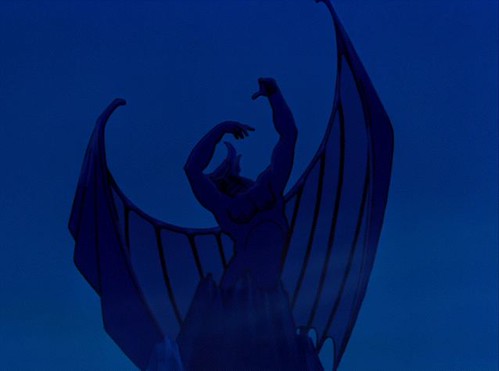 Is that weariness not Faustian in scope?

Which brings me back to the beginning: What is this knowledge that Faust seeks?

What rapture, ah! at once is flowing
Through all my senses at the sight of this!
I feel a youthful life, its holy bliss,
Through nerve and vein run on, new-glowing.
Was it a god who wrote these signs that still
My inner tumult and that fill
My wretched heart with ecstasy?
Unveiling with mysterious potency
The powers of Nature round about me here?
Am I a god?

Well, no, he’s not. But I suppose it will take him awhile to figure that out, to work through it.

But that IS a question, isn’t it? Knowledge, what is that? What kind of knowledge?

I’ve spent my adult life seeking knowledge, and at the moment I’m feeling rather good about what I’ve accomplished. Not triumphant, no, certainly not that. Not complacent, either. Satisfied? Sorta’. But “good” is the best word for it.

And such knowledge as I’ve been able to cobble together is not of the sort that one might find in the sign of the Microcosm. I gave that up years ago. In my undergraduate years, yes, I bought a copy of the I Ching, aka the Book of Changes, in a very handsome Bollingen edition from Princeton. But did I really think I would find knowledge in throwing hexagrams?

Not really. But I was interested in the fact that people once believed so, and still do.

That’s what Faust was after. And that, I gather, is what he gives over.

But then, what was I seeking in “Kubla Khan,” a poem about poetry?