Rereading Goethe’s Faust 2: An Unnatural Act and a Change of Plan

It’s been a slog. I’ve read the “Dedication,” the “Prelude on the Stage,” the “Prologue in Heaven,” and the opening scene, “Night, Faust in in Study”, of Part One. All that and I’m only 27 pages in and miles it seems like freakin’ miles before I can put this puppy to bed.

Fortunately, I’ve got a plan. Well, it’s Prof. Jantz’s plan as recalled to me by my friend Peter. Read it twice. First read the whole thing quickly to get an idea of what’s going on. Then go back through it a second time and pick up the details.

What has me worried is that I’m not sure I’ll be able to pick up the flow on the quick first read. Reading verse is tough, it’s just tough. Reading Shakespeare’s like that. Yes, the language is old, and that’s a problem. But the verse is a problem too. It may be brilliant verse, but reading it’s still tough.

First another remark about reading. I’m trained as a literary critic and that means that, as a matter of survival, I had to read texts in a most unnatural way – but what’s ‘natural’ about reading? When you study literature you’re expected to discuss texts in class and later to write about them. That means that you have to read texts with an eye toward coughing up bits of wisdom – well not wisdom perhaps, but something – in discussion. So you can’t just relax yourself into the text. You’ve got to be on the lookout for Important Things, Interesting Things. Heck, you even underline passages and make marginal notes, see: 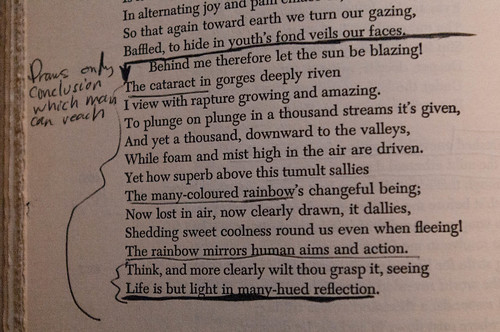 That’s distracting. Takes you out of the flow. It’s no way to read.


But you pretty much have to do it if you take a lot of literature courses in college and graduate school. You simply don’t have time to read every text twice, once for pleasure and once for class.

Now it looks like I’ll get a chance to try that. Or a semblance thereof.

The thing about Shakespeare, though, is that, archaic language and all, he makes much more sense when you hear the language spoken. The difficulties seem to go away. Just why I don’t know, but it’s been my experience that that’s the case.

And Goethe wrote Faust as a drama to be played on the stage and, long though it is, it has in fact been played on stage (though I’ll bet lots of lines have been cut in many productions). The fact that he wrote this as a drama during the rise of the novel, though, is itself interesting. After all, Goethe himself wrote a very well known, if not infamous (for all the suicides it supposedly inspired), novel, The Sorrows of Young Werther (1774). He wrote it when he was 24 and it made him an international celebrity.

Why didn’t he write the Faust story as a novel? In a way, that list of Faust parts in my second paragraph gives the game away. You can’t write a novel with a prologue in Heaven, at least you couldn’t in Goethe’s time. The novel is grounded in a more or less realistic depiction of the mundane world and the mundane world does not, I’m afraid, very often sojourn in Heaven. No, if your story absolutely must open with a conversation between the Lord and Mephistopheles, with archangels as back-up singers, then you can’t tell it in novel form.

I suppose Goethe could have opted for verse epic, but that was pretty moribund by his time. The theatre, however, was still alive and well. So drama it had to be, even if it had to be a very long drama.

But why did Goethe absolutely need that conversation between those supernatural beings?

And why do I keep getting echoes of Fantasia while I’m reading the book? 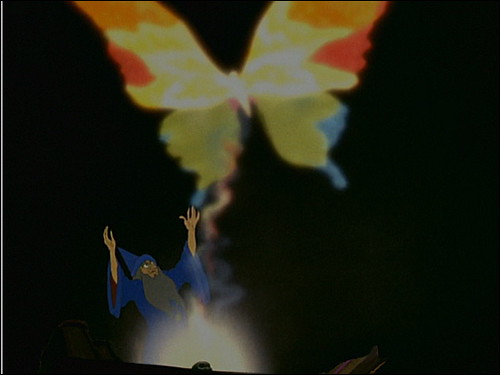