It’s Complicated 3: Social Manipulation in a Culture of Fear

In The Culture of Fear, sociologist Barry Glassner provides a detailed account of how American society uses fear to regulate everyday practices. He points out that people are terrible at assessing risk; many fears are connected, not to risk, but to how the media shapes the public’s perception of key issues.

That’s it in a nutshell: “American society uses fear to regulate everyday practices.” But America is not exceptional in that regard. It’s a widespread socio-cultural practice and it’s at the heart of cultural mechanisms of social control.

Here’s the paragraph to which that footnote is attached (p. 102):

From the advent of social media, it has been impossible to talk about teens’ engagement without addressing the topic of online safety and sexual predators. More than any other issue presented in this book, the topic of online safety generally—and sexual predators specifically—has played a significant role in configuring teens’ relation to mediated communication, adults’ attitudes toward teens’ participation, and policy discussions about social media regulation. Online safety is also a particularly complicated issue, in part because a culture of fear is omnipresent in American society, and no parent wants to take risks when it comes to their children’s safety. Statistics showing the improbability of harm fail to reassure those who are concerned. Even when highly publicized stories turn out to be fabrications, parents still imagine that somewhere, somehow, their child might fall victim to a nightmarish fate. They are afraid because terrible things do happen to children. And although those violations most commonly take place in known environments—home, school, place of worship, and so on—the internet introduces an unknown space that is harder to comprehend. Nothing feeds fear more than uncertainty.

Legal scholar Larry Lessig argues that four forces regulate social systems: market, law, social norms, and technology or architecture. Fear is often used in service of these forces. Companies sell fear to entice parents to buy products that will help them protect their children. Policymakers respond to fear by regulating children’s access to public spaces, even when doing so accomplishes little. The media broadcasts fears, creating and reinforcing fearful social norms. And technologies are built to assuage or reproduce parents’ fears. Given the cultural work done in the name of fear, it’s astounding that young people have as much freedom as they do.

Of course, there are real dangers out there. The existence of those real dangers lends plausibility to the hyped up dangers, and the hype, in turn, makes it difficult to deal with the real dangers in an intelligent way (p. 109):

Parental fear regarding sexual predators is understandable. No parent wants to imagine her or his child being harmed, and the potential cost of such a violation is unfathomable, regardless of how statistically improbable such an event might be. Combine this with the media’s magnification of the cultural mythos of the online sexual predator and it’s no wonder that countless parents become hyperprotective without considering the costs of their actions. But this distorted fear obscures the very real and costly risks that some youth do face. Untangling these issues requires stepping back and rethinking what we think we know regarding sexual predation.

In this situation, how do you draw a line between real danger and fantasized danger?

Once again I find myself thinking about my old standby, that 1947 Talcott Parsons essay I read in my freshman year of college, “Certain Primary Sources and Patterns of Aggression in the Social Structure of the Western World” (full text online HERE):

The upshot of the above analysis is in the first place that the typical Western individual — apart from any special constitutional predispositions — has been through an experience, in the process of growing to adulthood, which involved emotional strains of such severity as to produce an adult personality with a large reservoir of aggressive disposition. Secondly, the bulk of aggression generated from this source must in the nature of the case remain repressed. In spite of the disquieting amount of actual disruption of family solidarity, and quarreling and bickering even where families are not broken up, the social norms enjoining mutual affection among family members, especially respectful affection toward parents and love between spouses, are very powerful. Where such a large reservoir of repressed aggression exists but cannot be directly expressed, it tends to become "free-floating" and to be susceptible of mobilization against various kinds of scapegoats outside the immediate situation of its genesis.

Latent aggression has thus been channeled into internal group conflicts of various sorts throughout the Western world: antisemitism and anti-laborism, and anti-negro, anti-Catholic, and anti-foreigner feeling are found in this country. There are, however, potent reasons why nationalism should be the most important and serious focus of these tendencies. The first is the realistic basis of it. The organization of our civilization into nation-states which are the dominant power units has been a crucial realistic fact of the situation. Above all, in the chronic tendency to resort to war in crisis situations the loyalty to one's government has been to be in one sense the ultimate residual loyalty, the one which could claim any sacrifice no matter how great if need be.

For roughly four decades after the end of World War II much of the free-floating aggression and anxiety that was generated within the United States was directed against the Soviet Union. But once the Cold War collapsed at the end of the 1980s, the Soviet Union ceased to be available as a target of such aggression.

It had to somehow be redistributed. In American Craziness, which I recently published in 3 Quarks Daily, I argued that some of it got redistributed toward African Americans, who have, in any event, been a long-standing internal scapegoat. Boyd’s argument suggests that we are also redistributing some of it toward our young.

How does this work? Consider the following diagram: 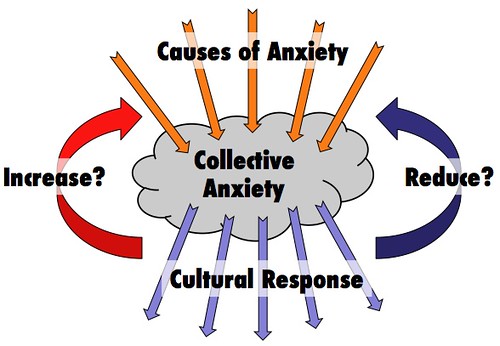 At the top we see various causes of anxiety. Some of them will be specific to a few individuals – a neighbor’s house is burgled, one’s spouse becomes seriously ill – while others may affect a large region – a hurricane is bearing down on one’s city – or even a nation – the assassination of a president, Manhattan’s Twin Towers being destroyed by terrorists who have commandeered commercial airliners. But then we have the mechanisms analyzed by the psychoanalytically-minded Parsons. They are embedded in society-wide personality mechanisms operate and they aren’t accompanied by specific identifiable targets.

Taken as a collective social ‘entity,’ that free floating anxiety, depicted by the cloud in the middle of the diagram, can be shaped and directed by a wide variety of expressive practices, represented at the bottom: fiction and non-fiction stories in various media, sports events, some experienced live while others are experienced through various media (TV, radio, movies), religious service, news stories in various media, and so forth. These cultural mechanisms may operate to “attach” this free-floating anxiety to real events in a way that exaggerates the danger inherent in those events and blinds people to more significant dangers.

Although lawmakers are happy to propose interventions that limit youth’s rights to access online spaces, they have not proposed laws to outlaw children’s access to religious institutions, schools, or homes, even though these are statistically more common sites of victimization.

A central challenge in addressing the sexual victimization of children is that the public is not comfortable facing the harrowing reality that strangers are unlikely perpetrators. Most acts of sexual violence against children occur in their own homes by people that those children trust. Sexual predation did not begin with the internet, nor does it appear as though the internet has created a predatory epidemic. Internet-initiated sexual assaults are rare. The overall number of sex crimes against minors has been steadily declining since 1992, which also suggests that the internet is not creating a new plague. At the same time, fear-based advertising campaigns continue to propagate the belief that the internet has introduced a new flood of predators into the living rooms of families across the United States.

She ends up arguing that technology is being scapegoated for problems it has not caused (p. 120):

In capitalizing on people’s fear of new technologies and abduction, stories like this may prompt action, but they also help to reproduce the culture of fear. They leave the public with an even more exaggerated conception of the risks that youth face while failing to address the dynamics that prompt teens to engage in risky behaviors in the first place.

Let us, then, return to the diagram. To either side we have arrows linking expressive responses to anxiety back to the various causes of. But that linkage is global rather than specific. We don’t have specific responses directed at specific causes. Further, in some cases the responses may serve to increase anxiety rather than alleviate it.

This is not a very effective way to run a society. But, to a first approximation, that seems to be how our society is run. And in this respect, there is no reason to think that America is an exception.

Let us return to a question I posed earlier: In this situation, how do you draw a line between real danger and fantasized danger? The question is real, not rhetorical. The answer is by no means obvious. Boyd has done so through careful research, not only the interviewing she has done for this project, but by consulting the social sciences literature.

But how do you get the message out to the public at large? That Talcott Parsons essay dates from 1947, almost seven decades ago, and the broad educated public hasn’t gotten that message. Nor, so far as I can see, though I would be delighted to find out that I am wrong, has boyd. Between what she has learned through her interviews and what she has learned from the literature, she knows something is wrong. But she has nothing to say so far – I’ve not yet finished the book – about why youth and technology are being scapegoated.

Talcott Parsons is not easy reading. That in itself doesn’t explain why, in almost seven decades, his argument isn’t common knowledge. Perhaps the problem is that his argument is also a dangerous one. Dangerous, not to the American people, but to those would manipulate and bamboozle us. How do we get through to, or simply get around, them?

Violence Against Children. A similar story can be told about children. The incessant media reports of school shootings, abductions, bullying, cyberbullying, sexting, date rape, and sexual and physical abuse make it seem as if children are living in increasingly perilous times. But the data say otherwise: Kids are undoubtedly safer than they were in the past. In a review of the literature on violence against children in the United States published earlier this year, the sociologist David Finkelhor and his colleagues reported, “Of 50 trends in exposure examined, there were 27 significant declines and no significant increases between 2003 and 2011. Declines were particularly large for assault victimization, bullying, and sexual victimization.”