How the Victorians Invented the Future 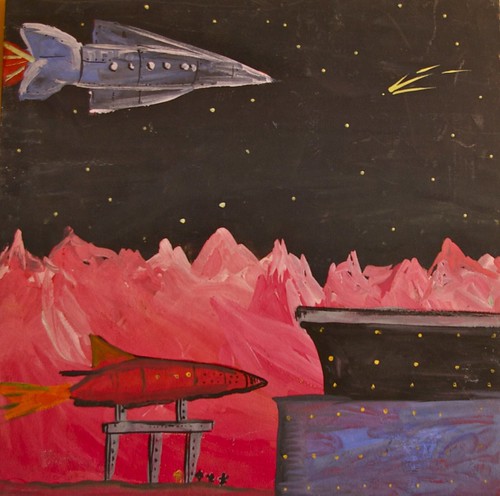 Before the beginning of the 19th century, the future was only rarely portrayed as a very different place from the present. The social order, like the natural order, was supposed to be static, with everything in its proper place: as it had been, so it would be. When Sir Isaac Newton thought about the future, he worried about the exact date of Armageddon, not about how his science might change the world. Even Enlightenment revolutionaries usually argued that what they were doing was restoring the proper order of things, not creating a new world order.

It was only around the beginning of the 1800s, as new attitudes towards progress, shaped by the relationship between technology and society, started coming together, that people started thinking about the future as a different place, or an undiscovered country – an idea that seems so familiar to us now that we often forget how peculiar it actually is.

The new technology of electricity seemed to be made for futuristic speculation. At exhibition halls in London, such as the Adelaide Gallery or the Royal Polytechnic Institution, early Victorians could marvel at electrical engines that promised to transform travel. Inventors boasted that ‘half a barrel of blue vitriol [copper sulphate] and a hogshead or two of water, would send a ship from New York to Liverpool’.

And they invented science fiction:

Just as they invented the future, the Victorians also invented the way we continue to talk about the future. Their prophets created stories about the world to come that blended technoscientific fact with fiction. When we listen to Elon Musk describing his hyperloop high-speed transportation system, or his plans to colonise Mars, we’re listening to a view of the future put together according to a Victorian rulebook. Built into this ‘futurism’ is the Victorian discovery that societies and their technologies evolve together: from this perspective, technology just is social progress.

It’s easy to pick and choose when reading this sort of future history from the privileged vantage point of now – to celebrate the predictive hits and snigger at the misses (Wells thought air travel would never catch on, for example); but what’s still striking throughout these books is Wells’s insistence that particular technologies (such as the railways) generated particular sorts of society, and that when those technologies were replaced (as railways would be by what he called the ‘motor truck’ and the ‘motor carriage’), society would need replacing also.

It makes sense to read much contemporary futurism in this way too: as a new efflorescence of this Victorian tradition. Until a few years ago, I would have said that this way of using technology to imagine the future was irrecoverably dead, since it depended on our inheritance of a Victorian optimism, expressed as faith in progress and improvement as realisable individual and collective goals. That optimism was still there in the science fiction of Heinlein, Isaac Asimov and Arthur C. Clarke, but it fizzled out in the 1960s and ’70s. More recently, we’ve been watching the future in the deadly Terminator franchise, rather than in hopeful film such as 2001: A Space Odyssey (1968). The coupling of technological progress and social evolution that the Victorians inaugurated and took for granted no longer seemed appealing.

Yet there does now seem to be a change in the air, and Musk’s bravura faith in the capacity of free enterprise to deliver what the state behemoth of NASA couldn’t is just one example. In 2011, the science fiction author Neal Stephenson set up Project Hieroglyph as part of an ambitious campaign to transform the genre and reignite ‘the iconic and optimistic visions of the golden age of science fiction’. Stephenson laments our ‘inability as a society to execute on the big stuff’ and suggests that science fiction has the capacity to generate an ‘overarching narrative’ that might offer scientists and engineers across the board a shared vision of the future they want to generate. I’m struck by the underlying assumption that producers of scientific fact and fiction alike should be engaged in a common project of technological future-making. Tesla and Wells would have approved.

I grew up wanting to be an astronaut, but by the time a man landed on the moon, I'd lost interest. According to Morus, I'm not the only one who lost interest at that time. Just why that happened is not clear to me. I know now that the public was never really all that interested in the race to the Moon and that Federal funding had more to do with competition with the Russians than with any genuine enthusiasm for space travel. In my own case, on the one hand I had become interested in other things – the mind, "inner" space – and, on the other, I had become skeptical of a government that had plunged us into the war in Vietnam.

These days, though, I wonder. Back in the late 1990s I'd visited Kennedy Spaceflight Center and had been deeply impressed with the site and the space memorabilia there: This is where we launhced ourselves to the moon! Maybe it's time to take another run at it, not merely the moon, but the asteroids, Mars, and beyond.

Why? There is the romance of it, though I've not yet talked myself back to that. But I'm thinking of what we're – humankind, all of us – going to have to do to make it through the coming century. There is survival, which IS an issue with global warming slowly breaking in on us. But if that's all that motivates us, survival, then I fear a grim future. We need something more.

Maybe space travel can supply it. The stars our destination – has a certain ring, no? The fact is, while I realize that better care for Planet Earth is a practical necessity, Gaia mythology does nothing for me. But I may be able to talk myself into the stars. For humankind to have an active off-earth presence, that would change our sense of ourselves quite profoundly.

And that's what we need. A new and renewed sense of ourselves.