This is another excerpt from David Hays, The Evolution of Technology Through Four Cognitive Ranks (1995). This is from Chapter 5, “Politics, Cognition, and Personality”, section 5.1 “Governing”. You might well wonder, as I did, what these topics have to do with technology. Hays’s reply, more or less: Why not? That is, he was taking a comprehensive view of the history of technology, but why not, in this chapter, use this comprehensive view of technology as an opportunity to look around the corner at other matters of interest, like governance and cognition more generally.

So that’s what he did.

As usual for these excerpts, I’ve followed the convention of setting the passage in a mono-spaced font, as it would have appeared in the original rather crude hypertext from the early 1990s. The yellow highlighting recognizes the current occupant of the White House, Donald Trump.

Each rank calls on new principles to account for the exercise of power by some sapients over others. Restrictions on procedure arise, as the size and effectiveness of governments increase.

How is the evolution of technology linked with the arrangements we make for living together in groups larger than the nuclear family (a couple and their children)?

Answer: In a loop of positive feedback. Increasing sophistication in one contributes to the advancement of the other. Both technology and governance exhibit a tendency through history toward greater differentiation and integration; nowhere does one get very far ahead of the other. We may look upon India and especially China as examples of sophisticated governance with only modestly sophisticated technology, and upon the German states of the nineteenth century as examples of sophisticated technology with relatively unsophisticated governance. Yet the need for a national economy to facilitate technological growth was offered as a reason for formation of a German national state, and China proved incapable of maintaining its internal system when confronted with Western governments backed by advanced technology.

The story of governance can be told in various terms:

1. Scale. How large is the population, or the territory, governed from one center?

2. Scope. What are the aspects of life governed? What is left to individual decision and individual protection?

3. Organization. What is the structure of the government?

4. Legitimation. How does the government justify itself? What is the basis of its right to govern?

History shows increase in scale and scope, deepening organization, and profound changes in the nature of claims to legitimacy. The last, of course, are of greatest interest to me because there, if anywhere, we can see paradigms change.

The technologies of Eden, Athens, Florence, and New York show evolution--increasing differentiation and integration. So do their forms of political organization.

Let me begin, this time, closest to home, with New York. The most basic principle of organization here and now is that an officer of government must separate the rights and obligations of his office from those of his or her person. If the officer is given a budget of $10,000,000, the person must not take $1 of that--as numerous officers have learned only by going to prison. Giving special help to friends and relations is also forbidden. Nor may the officer look to daddy's college roommate, who now occupies a much higher office, for special help in solving a hard problem. This principle belongs to rank 3; violation is now said to be corrupt, but in rank 2 "corruption" is the way of life.

But we are speaking of _offices_. A person may hold office for a time and then resign or be discharged. Some offices are filled by election, others by appointment. In rank 2, offices may be filled according to the personal whim of the person in charge. The very idea of _office_ is an "evolutionary breakthrough" ( Parsons* 1977:14, 15). In rank 1, it is unknown. A rank 1 person takes part in government either by performing certain actions on occasion, or by becoming a lifelong soldier or priest.

At each rank, the ramification of political structure grows as polities become larger. In a simple village with a leader, the chart of political organization has only two levels: Leader above, all others on one level below. A slightly more complex system has a third level, for a leader of leaders. And yet another level may be added.

As the leader's problems become more complex, two kinds of assistance appear. Councils of advisors help the leader work out plans. Staffs help to carry out decisions. From rank to rank, the staff comes to consist of persons with special preparation: Scribes, technicians, educated persons. Eventually the staff becomes a corps of mandarins, a civil service, a bureaucracy. The nature of staff preparation changes from rank to rank, as we shall see.

Spencer* sorted polities according to the number of hierarchical levels in their government: band or village (1 level), chiefdom (2), state (3), and empire (4). (See Carneiro's edition, 1967.) Anthropologists and archeologists find this a useful criterion. Since all four types appear in rank 1, and since rank 2 begins with 1-level city states, and since we may wonder whether rank 4 will accept a government for Earth with 4 or more levels of regional hierarchy, I cannot take Spencer's categorization as my main outline. (See Gibbon, p. 342 ARCHBIBL* or Fried, Sahlins, or Service in Po12BIBL* .)

One factor that is proposed to explain deepening organization and increasing staff at each level is sheer _volume of information_. Thompson (1964) estimated that some event that is significant to the U.S. Department of Defense changes a million times per second. Each level of hierarchy reduces the amount of information that the next above need consider. If all goes well, the rate of information at the top is manageable.

The original paradigm of sociopolitical organization is the family. When an anthropologist writes on social organization, his topic is kinship and generalizations of family relationships. Up to the invention of writing and the emergence of rank 2 thought, any group that considers itself a political unit also believes that its members are all descended from a common ancestor--remote, legendary or mythical, but the human father or mother of us all.

With movement up the growth curve the polity grows larger, and the leader becomes more significant. From rather early, the leader is endowed with powers beyond the ordinary. At length he is recognized as embodying a god. He is, perhaps, the eldest son of the eldest son ... of the god from whom all others in the polity are descended through less eminent branchings.

One of the most remarkable effects of the transition to rank 2 is the spiritualization of religion. Instead of stones, trees, or mountains, rank 2 worships abstract gods. Such a god can select a leader, who therefore has divine right to rule, but such a god cannot be embodied in a person. Kinship is much less to the point (Abrahamson in Po12BIBL* ).

When Europe re-entered rank 2 after the Dark Ages, it shaped its political paradigm in a new context. The most advanced rank 2 thought about governance generalized from religion to ideology (although my position is not quite the same, see Weber). The abstract god who legitimized the government gave place to a system of abstract ideas. Sometimes these ideas were considered to be the inner spirit of a people: The Germans, for example, or the Japanese, or the Slavs. Then the legitimizing ideas are likely to be not only abstract but also ineffable. A little later, in some places, thinkers tried to formulate explicit ideologies: Protestantism, property, and later still Communism and Fascism. The membership of an ideological polity is defined by the ideology; perhaps by blood, or perhaps by belief in the ideology, regardless of kinship.

Rank 3 rises above ideology. It transforms the legitimizing principle from an ideology of revealed and unquestionable truths into a scheme of assumptions that can be examined critically; the governance of a country can be analyzed rationally as if it were a theory of physics. Frankl remarks that a fanatic does not have an idea; the idea has him. Ideology is governance by and for fanatics. Rational governance is not; it is for populations that can think about their principles, and alter them from time to time. The members of a rational polity are those who choose to join it, provided they can handle ideas: The USA has accepted great numbers of immigrants as "Americans".

The preparation of staff in rank 2 is ideological. Knowledge of Christian theology, of Marxism-Leninism, or of Confucian literature, is not necessarily a sound basis for a career in public administration. Rank 3 creates programs of education in law and management to prepare future staff members. I should prefer to reserve the term "bureaucracy" for rank 3.

We are now far beyond the beginning of rank 3. In optimistic mood I believe that the world is well up the growth curve toward rank 4. But I am unable to recognize a crystalization of rank 4 governance, and I suspect that it will not be possible to say what is the most advanced kind of rank 3 governance until the crystallization occurs and reveals its sources. Cultural relativism, the belief that every culture must be judged on its own criteria, might be what I am looking for. It would seem possible to establish a world government by applying that principle. But rank 4 might well discover that a small set of values has to be respected everywhere: Life, health, freedom, dignity. I do not know. 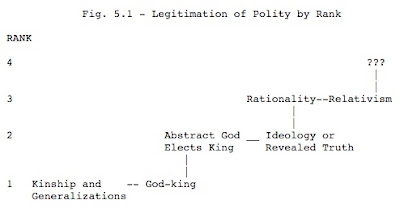