Ramble on: Managing the mind [Ramble 12]

Just this morning in my open-the-day cruise on the web, what do I find? Tyler Cowen quotes one Ben Westoff:

Americans take more opioids per capita — legitimate and illegitimate uses combined — than any other country in the world. Canada is second, and both far outstrip Europe. Americans take four times as many opioids as people do in the United Kingdom

And then from an article in the NYTimes on Marianne Williamson:

Devotees of new American religions — Spiritualist healers, Mormons, Scientologists — have sought political office over the years. The Lincolns, famously, were known to hold séances. The Reagans consulted an astrologist.

Truly, spiritual experimentation is an American tradition. The 1960s and ’70s were awash with entrepreneurs of the esoteric. Mediums in every state claimed to be conduits for all manner of spirits: warriors from lost continents, wise Native American elders, even voices from distant planets. It was out of this milieu that “A Course in Miracles” bubbled to the surface.

Mind management, all of it.

Sometimes we seek to do it alone, other times in small groups, and still other times, as many people as can gather together in as large a space as possible.

Mind management, all of it.


My earliest memory is of listening to “Fiddle-de-de” over and over again on the record player. Once drove a visiting uncle crazy, so I’m told.

When I was a bit older I remember becoming engrossed playing with toy figures – people, animals, but also cars and trucks and such – in my sandbox. I’d enter a different world, with joy and fascination. Then one day the magic no longer worked. Moving the little men around – were they soldiers? not that it matters – pushing the cars, digging in and piling up, it no longer attracted, no longer gave back. I was just going through the motions. A sad day.

And then there was books, to get lost reading a book. My father would read books to me before I went to sleep – Huck Finn, King Solomon’s Mines, Moby Dick (yes! Moby Dick – I wonder if he skipped parts without telling me). Simply getting to sleep, mind management again. That’s what bedtime ritual is. Awakening as well.

Back to the books. I read on my own. For some reason I remember being drawn into Pagoo while on vacation one year. It’s about the life of a young hermit crab, with wonderful illustrations. Later on, in my early teens, I stayed up all night reading Spartacus. I did that often in those days, read late into the night.

Not so much any more. My reading habits are much different from what they were even five years ago, much less 10 or 20. I supposed the internet has something to do with it. But also the need to write, to figure out what I know.


I get up in the morning, around 6AM, sometimes earlier, sometimes later. Make my rounds of the internet, which may take 10 or 15 minutes, or perhaps as much as an hour or more. It depends. Some days I’ll write a bit – as I’m doing today – while other days I’ll have breakfast, perhaps shower. And then write, if that’s what’s on the schedule. I generally save the mornings for the toughest intellectual work of the day, whether it’s writing, perhaps drawing some figures, but maybe just reading around and taking notes, making preparations for writing, perhaps going through my files to see what I’ve got ¬¬– there’s more than I can keep track of.

Then lunch. And then more routine work. Perhaps I’ll spend an hour or two formatting a working paper – getting the fonts right, inserting the footnotes, that kind of thing. And then there are chores, a trip to the grocer, move the car, whatever. Maybe I’ll take some photos.

And maybe I’ll watch some Netflix or Amazon video – something I can do any time of the day.

Late afternoon have a scotch or two. Not everyday, though. I’ll go for a week or two, or even a couple of months without the daily scotch. Then come back for a couple of weeks.

After the scotch I’ll have dinner, maybe Netflix. But there are days when I’ll have may scotch and then write, sometimes the easy writing, sometimes the tougher stuff. I learned to drink scotch – and I do believe that “learn” is the proper word – when I was at Johns Hopkins, as secretary of the Tudor and Stuart Club, which was a literary society. I’m still trying to figure out how to use it. Back in those days I also smoked weed, generally twice a week, Wednesday and Saturday evening (yes, I had a schedule), but no more.


Sleep. I supposed my baseline is seven or eight hours. I like to go to bed at 10 or 11 and awake, as I’ve said, around 6. But it varies. And when I’m on a creative streak I may work in the middle of the night, perhaps for an hour at a time, sometimes more.

Last night I went to bed at 10:30 or so, did something or another (I forget what) at midnight without really having fallen asleep, and I got up, say, an hour, hour and a half, later and worked on photos. My friend Peter invited me to his place for a BBQ and I decided to take some photos. Here he is cleaning the grill: 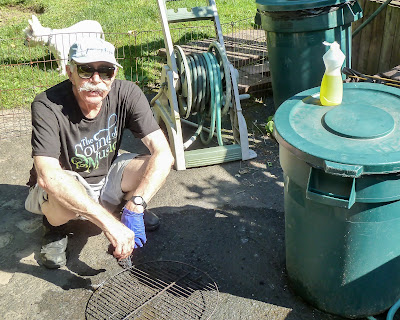 And here’s my favorite photo: 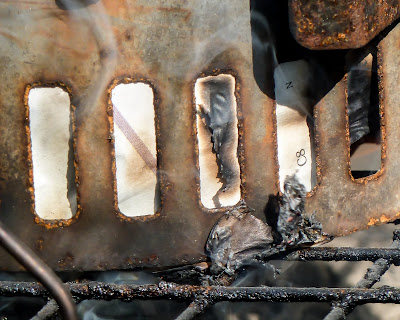 That’s a grill there at the bottom. The contraption sitting on it is for getting the charcoal started. You don't need to know (how it works). Just look for the “C8”, middle right.

Getting back to the flow, this doesn’t feel all that creative, not like last summer and early fall, but it’s good enough. A bit more like work.

We’ll see how it goes.

I wonder what I’d learn if I kept a daily journal of my activities, what I did and when. I’m sure I’d learn something. But would the activity itself be (too) intrusive? FWIW, I’m not feeling it now.

I was going to say something about mind wandering – which has been a topic of psychological research for the last several years – but maybe later.

Are these rambles a form of mind wandering?

Addendum, July 6, 2019: I forgot to mention something very important, napping. I enjoy napping, always have. In 4th grade was it? I read that Gen. Robert E. Lee was a napper. I found that reassuring. Sure, he was on the wrong  side of history. But nonetheless he was an Important Person and he was a Napper. That's what I cared about at the time.

I believe there are now companies that permit, even encourage, napping. Wonderful.