Nature insisting on life among the detritus of civilization

William Bryant Logan, writing in The NYTimes, July 20, 2019, about the resurgence of nature in the Fresh Kills Landfill on Staten Island 18 years after it had been closed;

Moving on, we walked into a rolling landscape where the soils were part dirt, part garbage, part riprap gravel. The makeshift stream beds were pus green. Willows struggled along watercourses that were edged with thick rinds of stone. Some cottonwoods had managed to reach a respectable height, but most had been pulled down by hydra-headed vines. Scrawny red maples ran uphill right into a descending phalanx of branchy black cherries. Royal paulownia, the queen of weed trees, sat on garbage bluffs along the canals, beside the threadbare poles of pear trees. It was a mix of natives and invasives, but each was a tree or a vine that liked to live in what ecologists call “disturbed landscapes.”

I became disturbed just looking at them. One fallen black cherry had turned up a root plate six feet in diameter. Rootlets wound in and out of the rough surface, like the filigree in some Tiffany brooch. Packed among the exposed roots were green, clear and brown bottles of a dozen sizes; half a child’s red plastic dump truck; fragments of plates, cups and dishes; and a few hardy red and yellow labels. Stretched taut in a corner was a beige nylon stocking, one end of which adhered to the top of the root plate while the other clung stubbornly to the ground.

I was spellbound, so I almost stepped on a snake. She gathered herself into a loose coil a foot away from me, regarding me appraisingly, her tongue flicking in and out. A beautiful yellow-striped garter snake! My first thought was, “What is she doing here!?” My second was, “This is the first wild snake I have ever seen in the city.”

What does the forest know?

We know how long it takes most kinds of leavings to decay. Organic material goes quickly: cardboard in three months, wood in up to three years, a pair of wool socks in up to five. A plastic shopping bag may take 20 years; a plastic cup, 50. Major industrial materials will be there for much longer: An aluminum can is with us for 200 years, a glass bottle for 500, a plastic bottle for 700, and a Styrofoam container for a millennium.

The forest does not know this. It does not think. It just acts. Because it is so good at sprouting, resprouting, reiterating, and repeating the entire process, it can keep up the living and dying for as long as it takes, even if that is a thousand years. The trees are not conscious. They are something better. They are present. [...]

We think of woodlands as places of beauty and repose. We are accustomed to judge a picturesque woodland as a good one and an ugly wood as bad. When Mount St. Helens exploded in 1980, there were endless plans to make it better. Instead, the rangers and scientists mainly stood back and watched. A new forest is slowly emerging. We need to change our thinking: Ask not just what these landscapes look like, but also what they are doing. Fresh Kills Landfill taught me that they may be places of struggle and healing as well, particularly when they come to restore what people have deranged.

In a similar fashion, nature has reclaimed the Bergen Arches in Jersey City, a deep mile-long trench that had once had for train tracks in it: 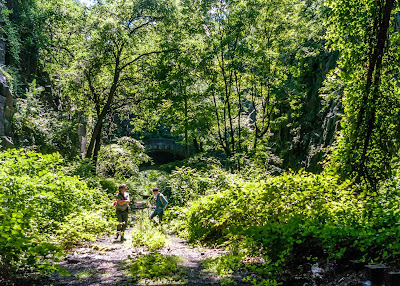 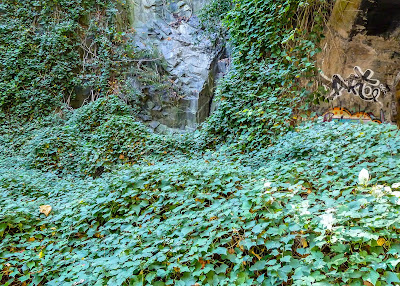 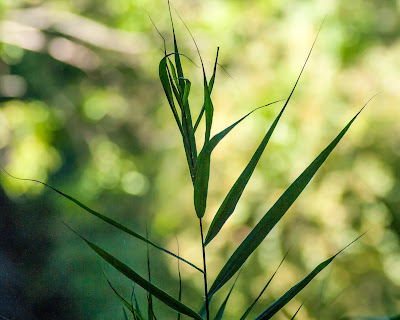 In a polluted pond just outside the Arches: 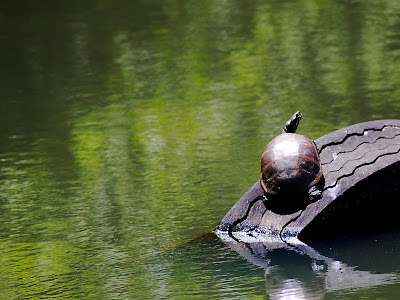 Does that turtle realize, or care, that it's sunning itself amid trash?