Friday Fotos: The NOTHING Photograph, Again (for Peter)

I’ve written about NOTHING photos before*. But I love them, so why not again? Moreover, I took all but one of these when I was on a photo safari with an old friend of mine, Peter Barnett, whom I’ve known since college. We went to Liberty State Park, at the southern end of Jersey City.

This is a “nothing” photo (click on the photo to enlarge it): 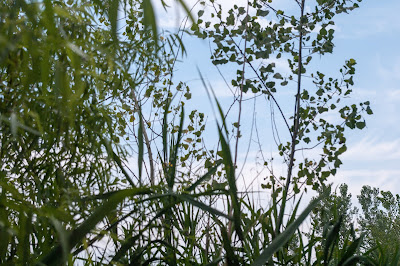 What do I mean by that? What’s the subject of this photo? Where’s the focal point, what’s at the center? Can you point to it, name it? Look closely. To the left and along the bottom we can see some leaves of grass, bending this way and that, and out of focus. To the lower right there’s trees in the distance, apparently in focus. Somewhere in between, particularly to the right of center, branches and leaves, a bit out of focus. And the sky, with clouds, more or less center and right. If the photo is about anything, it’s about all those things in their relationships with one another. Not nothing, to be sure, but not a ready-graspable subject either.

Now look at this photo. I didn’t take in on my walk with Peter. It’s 15 years old and I took in in Millennium Park in Chicago, which had just opened. What’s at the center? 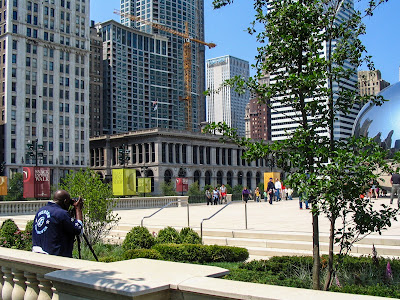 You can probably name something, perhaps that building with the high arched windows. Perhaps some people standing in the plaza. But it’s a stretch. Those things are in the photo, but it isn’t about them. Perhaps its about the photographer in the lower left. Really, with his back to us, about him? He’s photographing something, perhaps that silvery thing to the right, and sculpture (aka “the bean”) that’s not quite finished – the joints between the plates must still be removed. But it’s not about that. I figured that it’s about relationships. Yes, we’re drawn to the photographer because he’s the largest human in the photo, and humans are always salient. We follow his line of sight into the photo and see that polished metal, the people in the plaza, that building. This is a precursor to that nothing photo.

Here’s another nothing photo. We’re back in Liberty State Park with Peter. He was telling me about clouds, so I took a photo of clouds (not for the first time I might add): 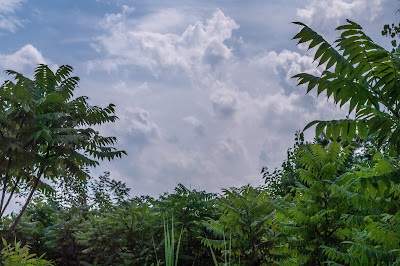 I suppose you can think of the clouds in the center as being framed by the foliage. Why not? But if the foliage is a frame, well isn’t it as interesting as the clouds? I think so. One could as easily say that the clouds illuminate the greenery. BTW, notice the leaves of grass at the bottom center.

What about this? Yes, the tree trunk. Is anything in focus or is it all just at bit off? Let’s call it soft focus and pretend that I knew what I was doing. 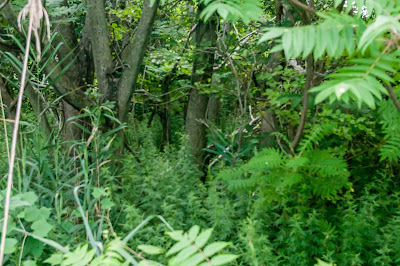 What’s that almost-white sprig of grass doing shooting up the left edge? It exerts a pull, as do the leaves coming at us from the upper right. Really, everything else “hangs” from them, propped up by those tree trunks.

I really like this one, so I’ll give it to you in two versions: 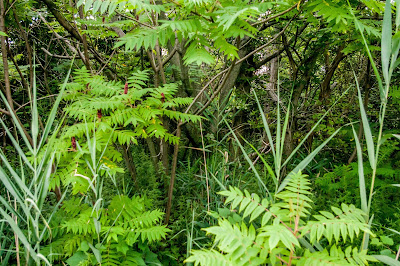 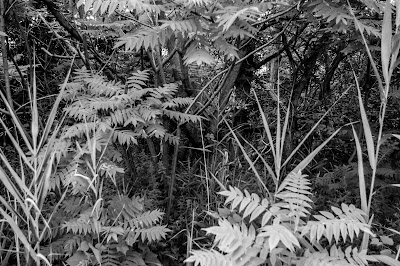 We’re looking at the same tree as in the previous photo, but a slightly different angle and a bit further out. Just look at the variety. You can fill in the rest. 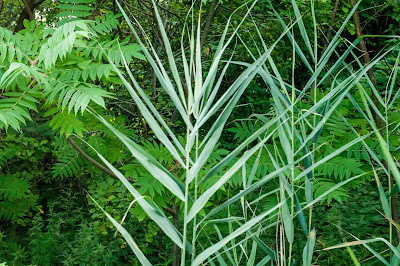 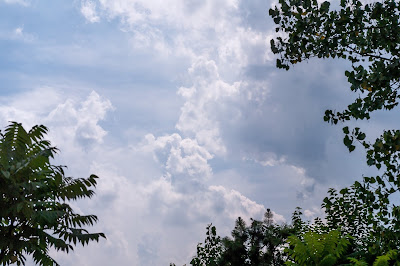 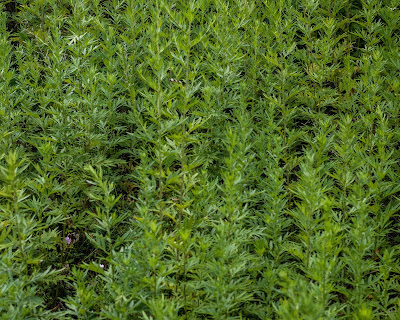 This last one, however, it a bit different. Is it nothing, or is it texture? What about the hint of color in the lower left?