The Site of Graffiti: Linked Poetry and Mu’en

Graffiti expresses the kami of the site where it is situated

I take it from my post, Living Graffiti, that the site of graffiti is the focus of our, or at least my, investigation. But the site is to be understood, not as a mere physical place. It IS that, but the physical place is to be understood, perhaps, provisionally, as a resource accessed by the graffiti, and thus by the graffiti writer. The site is a confluence of physical, social, and aesthetic energy.

In order further to understand this, a little comparative investigation is called for. And for that we turn to—where else?—but to Japan and Buddhism. Not directly, but as interpreted through Eiko Ikegami’s wonderful book, Bonds of Civility: Aesthetic Networks and the Political Origins of Japanese Culture (Cambridge 2005). We start with linked verse, a form of collective, public poetry practiced in the 13th century (and later):

The atmosphere of a Cherry Blossom session was intensely moving for its participants. The typical number of seats poets in a za session was not fixed but usually stood at around 10. Unlike the more formal linked-verse meetings of later periods, however, members of the audience that surrounded a circle of poets in a Cherry Blossom session were free to contribute poems of the own to the circle. After one sequence of chain poems was made by seated members in the circle, the floor was open to the public. All the participants in the meeting would avidly search for the best follow-up verse, one after the other, Sometimes, dozens of poems were thrown in from the audience to provide the next stanza in a particularly difficult chain. When an unexpectedly interesting succeeding stanza was presented, the perceptive participants would be captivated by feelings of surprised exhilaration.

In other words, we be jammin’.

All of sudden, already seasoned writers like TECK, SERO, SNOW, and the QMB CREW started rocking ‘our’ walls, to where soon you could go up there on any given Sunday during the summers of 1991 to 1993 and find at least ten people painting, and twenty more just hanging out. . . . The Newport Wall was the first time writers from different New Jersey cities got together on the regular and had a place to meet and paint as a collective.

Times have changed, but the Newport Wall’s still there, only three blocks from the Holland Tunnel and thus within earshot of thousands of cars a day, though it’s been neglected of late and part of the wall’s covered with dirt, dirt thrown there as part of preparations for erecting apartment buildings that have not yet happened. 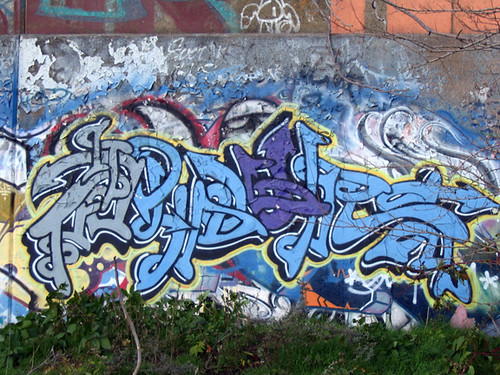 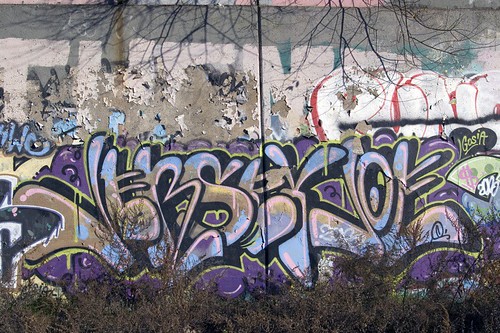 Some writers from the UK (see “UK” in the green at the right edge), notice the freshly dozed dirt in front of the wall; photo from December 2006: 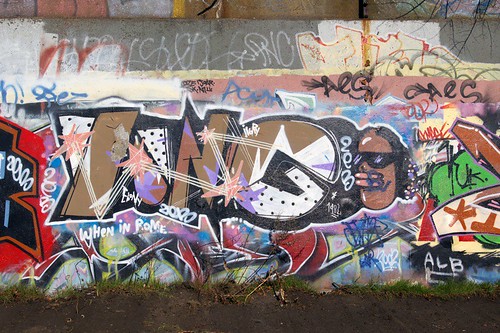 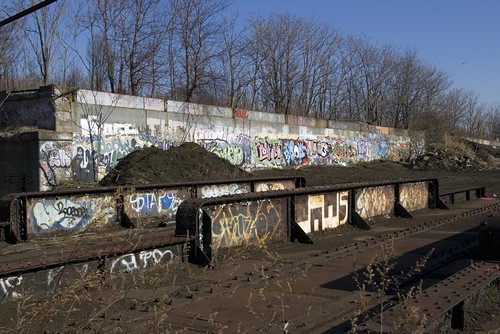 A little graffiti in the mist, photo taken 2007: 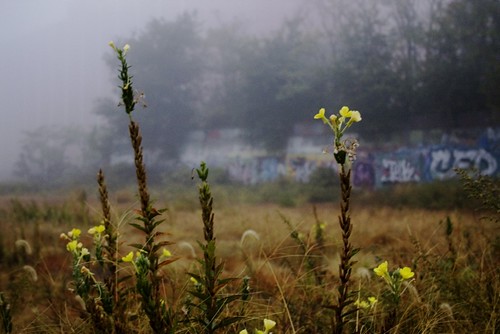 Taboo and 41Shots, DYM crew from Brooklyn, earlier this year: 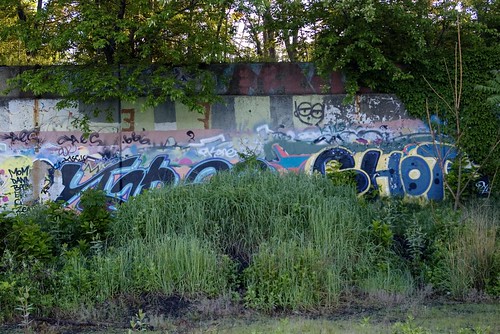 But I digress. Back to Ikegami, Japan, and Buddhism (87):

Closer observation of the operation of the Cherry Blossom sessions reveals the presence of multiple devices for creating spheres of mu’en, or “no relation.” The word mu’en (mu means “absence” in literal English translation; en means “relationship”), originally a Buddhist term, implied the absence of a relationship to worldly constraints.

In this sense, it was fitting that the Cherry Blossom linked-verse sessions were organized by such nenbutsu hijiri as Zenna because these monks not only renounced the world, but also frequented funerals and graveyards, the realm of the dead. They were persons who typified mu’en in that their bodies and very existence were sites of no-relation. Mu’en referred to sacred places but also to such spaces as markets, trading posts, bridges, riverbanks, and graveyards. Bridges represented physical connections and geographical boundaries. Graveyards were the realm of the dead, in which the living communicated with their ancestors during funerary rituals. Thus mu’en spaces offered a kind of asylum at places of boundary intersection as spheres for transformation.

These mu’en spaces, these ‘no relation’ spaces, could also be thought of as interstitial. However you think of them, the Newport Wall is like that.

Fifty or sixty years ago it was a train station. The ground in front of it carried four train tracks while the wall supported a station. Goods and people moved over those tracks to and from the banks of the Hudson River. When the railroads left Jersey City, the tracks were ripped out, the station dismantled, and the site, which once had been bustling with activity, became deserted, useless, between the cracks, mu’en.

And then the graffiti moved in, like a spirit. As a manifestation of spirit. The Japanese word is kami, “the central objects of worship for the Shinto faith” according to the Wikipedia:


There are other spirits designated as kami as well. For example, the guardian spirits of the land, occupations, and skills; spirits of Japanese heroes, men of outstanding deeds or virtues, and those who have contributed to civilization, culture and human welfare; those who have died for the state or the community; and the pitiable dead.

Graffiti is a manifestation of the kami of a site.

Think of it this way: In a modern and secular Western ontology, a place has many separable aspects. It is a physical site consisting of a certain substance, or collection of substances, having a certain location and a certain form. Plants may grow there, animals feed, or nest, or mate, whatever. Those are other aspects of the site. One might also talk of the light incident upon a site, and the sight lines to and through it – very important for architects and urban planners. Then there are the laws governing use of the site and accessibility of the site. Those last laws are very important for graffiti, for they determine whether or not it is legal for a writer to step foot on the site.

My point is, however, that in a modern Western ontology, these features or aspects are all separate. The site can be analyzed into, reduced to, those aspects. What do we call that thing that is all those put together, inseparable? Provisionally, we can call it a kami, the spirit of the site.

The graffiti writer, then, is attracted to, called to a certain site by the kami. What the writer does is a manifestation of the kami. The flow of graffiti on the site, then, expresses the life of the site’s kami.