How I Found a Home in Jersey City and Got Steve Fulop Elected Mayor, Part 3

I'm bumping this to the top of the blog in honor of the fact that today, August 6, 2020, almost thirteen years after we started working for it in November, 2013, Jersey City opens it first legitimate, purpose built SK8 park.

When the second installment ended I was photographing graffiti and had started volunteering in the Hamilton Park Neighborhood Association. There I found out that Janice Monson, who taught in the Jersey City schools and was a hardcore activist, used to take her students up on the Newport Wall and take their pictures upon graduation.

Back in November of 2006, before I’d shown up at an HPNA meeting, I was walking around, or perhaps I was in the car on the way back from my Sunday AM grocery run. One or the other, it doesn’t much matter. Anyhow, I spotted some color: 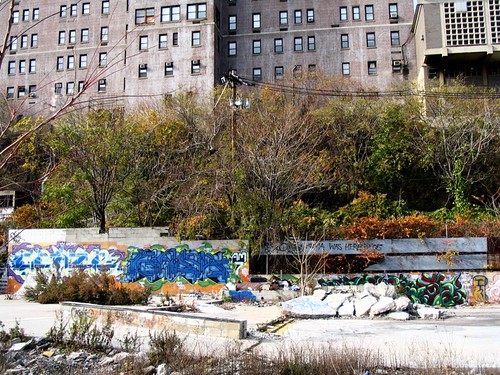 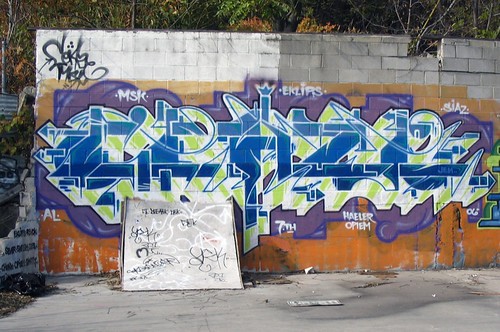 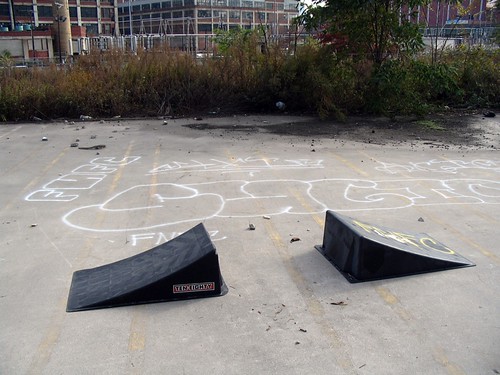 Someone was obviously using this site—the floor slab of an abandoned industrial building of some sort—as a park for skateboarding and BMX bike riding. See: 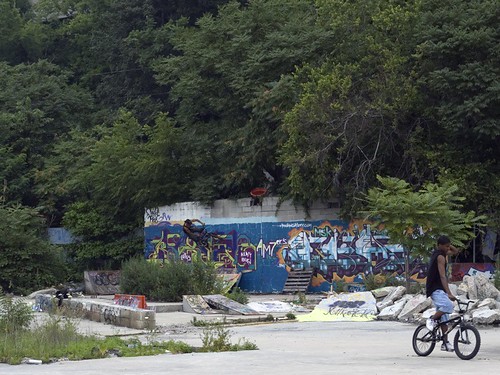 I took that one in July of 2007. Notice that the art on the walls has changed. It seems that some local, and not so local, graffiti writers used this site as something of an experimental gallery even as the skateboarders and BMXers used it to hone their athletic skills.

All off the books, so to speak. They were trespassing on this land. But no one cared. The cops certainly knew what was going on. Sure, it was a little off the beaten path, but only a little. The site’s not particularly remote or hidden. Oh, they knew, the cops. But why hassle the kids? They weren’t hurting anyone; the land wasn’t being used for anything. Let ‘em use it; keeps ‘em outa’ trouble. 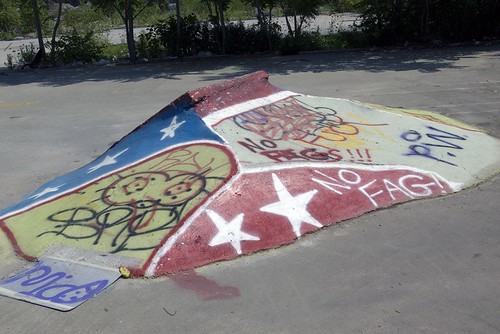 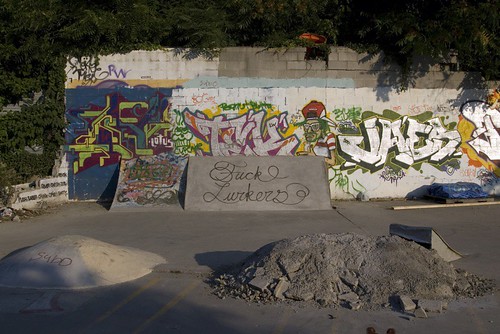 Someone was hauling concrete back there and building mounds and ramps. Someone knew about construction. Someone was investing in improvements in this property that they didn’t own. Call it crazy; call it initiative; call it real.

Then, disaster struck in early November 2007: 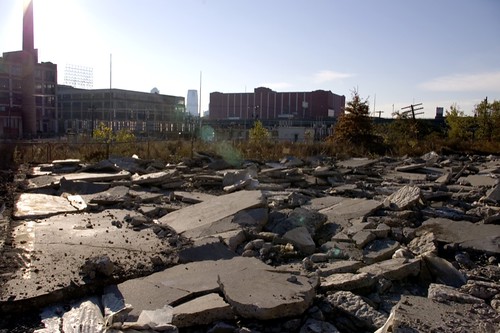 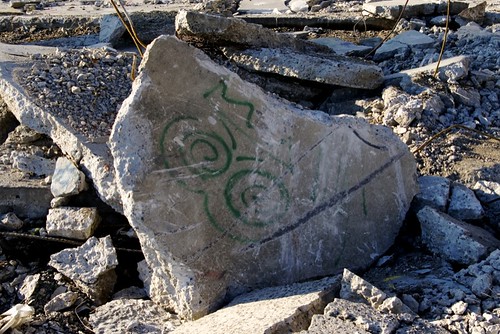 The land had been sold and the surface broken-up, presumably in preparation for construction (construction which has not, post-financial meltdown, happened yet). The skate park was gone. Investment wiped out. 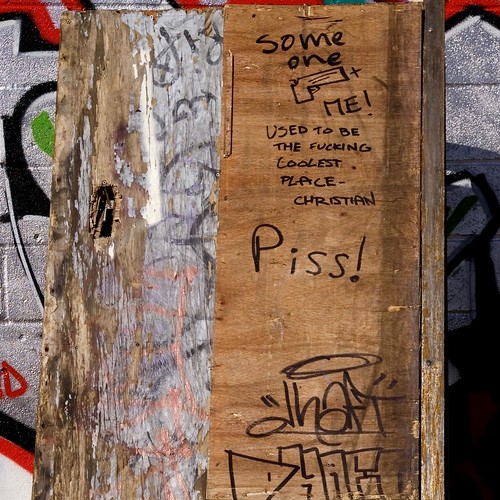 “Someone shoot me,” it says, “used to be the fucking coolest place.” Then, a few days later, another sign appeared: 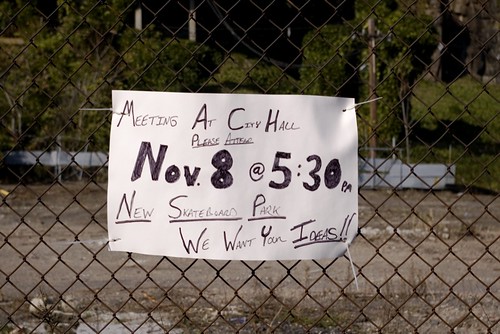 Could’a knocked me over with an aerosol blast. Who in City Hall, I asked myself, gives a crap about these kids and their park? Perhaps it’s this Fulop guy I’d been hearing about. I was curious, put on my banker’s suit, and went to the meeting.

Four skaters, one councilman, Steve Fulop, and me. That was the meeting. Fulop asked the skaters if they could get more skaters to come to a rescheduled meeting. They said they could. Fulop scheduled another meeting for Monday 19 November. I told the councilman that I would donate photos of the site to the library so that there would be a permanent record of the park, which I did a week or so later. It’s there in the New Jersey room in the main branch.

And I started reading up on Fulop. Seems he was interesting enough that the New York Times did a profile of him when he won his first City Council race in 2005: “Party insiders privately say that Mr. Fulop's new colleagues in Jersey City politics will be watching closely to see just how cooperative he is, or how far he will go to make a name for himself.”

Monday 19 November rolled around and 30 or 40 skateboarders showed up along with a parent or two and the owner of a tea shop (now closed) who was sponsoring a skateboard team. Fulop said that we would be negotiating with the New Jersey Turnpike authority for park space under one of the Turnpike viaducts connecting downtown Jersey City to the turnpike. The school district had already made a deal for parking under one of the viaducts so there was precedent for such use. As far as Fulop was concerned, the park was a done deal. He asked the skate boarders for their input on the design and indicated that, once things got rolling, he would meet with them once a month until the park opened up.

Hooray! Score one for the people.

The kids – though not only kids, some were young men in their 20s – met on the City Hall steps after the meeting and organized an email list. I was having dreams of young folks getting a lesson in DEMOCRACY IN ACTION.

It was glorious to stand there high on the steps and see sk8boarders fan out heading home into the cool downtown night. Black, Latino, White, East Asian, South Asian, young and younger, male and female, on sk8boards heading home, perhaps to dream of a REAL skatepark.

Alas—you knew this was coming, didn’t you?—it was not to be. Fulop kept after the Turnpike Authority for a few months, and I kept after him. But the Turnpikers never came through with another meeting, much less an agreement on use of land under one of the viaducts. I doubt that anyone was surprised about this. Disappointed, sure, at least those of us who’d hoped. But surprised, no. 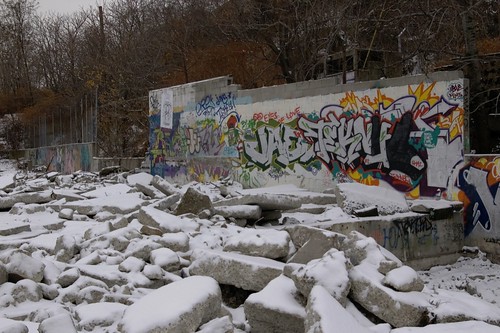 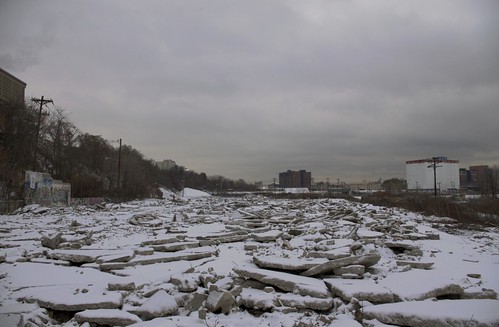 By that time I’d been thinking and I had a plan. A crazy plan, a dream. By that time I’d seen a lot of graffiti in interesting hidden places. I’d been through the Bergen Arches several times. I’d even taken Plasma Sluggs, a Brooklyn writer, down there. He had one word for it: Paradise.

So I drafted a plan, showed it around, and gave a copy to Fulop: Jersey City: From a Skate Park to the World:

Jersey City has an unparalleled opportunity for developing park space and cultural amenities in a two-mile corridor running from the Powerhouse Arts District in the East, along the Sixth Street Embankment to the Palisades, then up the River Line to the Bergen Tunnel, and west through the Erie Cut-Bergen Arches to JFK Boulevard. What is unique about this strategy is that is builds on both abandoned railroad properties and on Jersey City’s status as a center for graffiti art of the highest caliber. By capitalizing on its graffiti heritage, Jersey City can attract tourists from around the world and establish itself as an international center of cutting-edge art.

This development strategy includes three park-garden areas: 1) Sixth Street Embankment, 2) River Line Walk, and 3) Erie Cut. A skate park is already being planned for the River Line Walk area. At full development the Erie Cut would have a series of small gardens in various national styles – Indian, Chinese, Spanish, etc. – and a conservatory linking the bottom of the cut to the street-level surface(Route 139). There would also be two modest museum complexes: 1) a graffiti museum at 12th and Monmouth, and 2) a railroad museum nearby at the Bergen Tunnel. These complexes would include restaurants and shops.

A thumbnail calculation indicates that these developments could bring new tourist revenue to the city in the amount $36 to $90 million (or more) annually. Other benefits include increased property values along the corridor and new businesses.

It was a crazy plan. Beautiful, but crazy.

And I was pretty much hooked on Jersey City.

There are more random conjunctions, meetings, and conversations. I moved to Lafayette, met June Jones of the Morris Canal Community Development Corporation, and volunteered with their garden on Pacific Avenue. When Fulop showed up at the grand opening I was able to give him the name of someone who could arrange to have his campaign headquarters painted:

That’s my contribution to getting Steve Fulop elected mayor of Jersey City: a few dollars, a vote, and an introduction. Who knows, perhaps an idea.

Of this there is no doubt: Jersey City is my home.