... vast sums of money become more comprehensible if they are reframed in terms of more familiar amounts. In a 2009 blog post, the mathematician Terry Tao rescaled the entire United States federal budget to the annual household spending for a hypothetical family of four. In Dr. Tao’s rescaling, a $100 million line item in the budget became equivalent to a $3 expenditure for the family.

Research in psychology and science education supports Dr. Tao’s strategy. In 2017, cognitive scientists found that students could grasp extremely long time periods — say, between the extinction of dinosaurs and emergence of humans — more readily if they created a personal timeline of the most significant events in their lives and rescaled it to progressively longer time spans: all of American history, all of recorded history and so on. These students were also better than controls at estimating numbers in the billions, an ability that is vital to understanding geological time, astronomical distances or the bewildering sums in the federal budget.

To that end, we thought it could be instructive to update Dr. Tao’s exercise, this time using the numbers in Mr. Biden’s proposed 2022 budget. 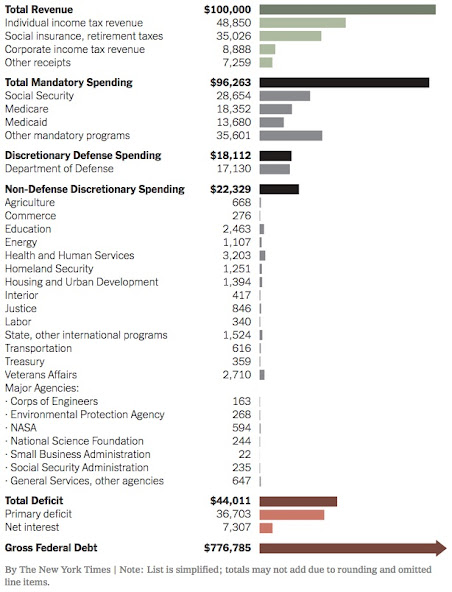 Taken together, these four items add up to almost $80,000 in expenses for our nation-family. In addition, we must still pay off the interest on the national debt, for another $7,000, plus $36,000 on other assorted mandatory programs. So exceeding the budget by as much as Mr. Biden is proposing leaves only about $22,000 to spend on the other things we care about, the so-called nondefense discretionary spending.

So what, you ask, does that have to do with Walt Disney’s Fantasia? Some years ago, in a blog post entitled “Disney’s Fantasia as Masterpiece”, I argued that that film scaled the entire cosmos, as it was then understood, to a moving running roughly two hours. This is not the place to reprise the whole argument – you can find that in the original blog post and in a subsequent working paper, Walt Disney’s Fantasia: The Cosmos and the Mind in Two Hours – but I can give you a taste.

Both a microcosm and a macrocosm, from the blog post:

Pyotr Ilyich Tchaikovsky - Nutcracker Suite: Six pieces, each fully representational, each presenting some aspect of the natural world, but in small compass. The virtual field of view is, say, a foot or two wide at the focal plane. Individual leaves, flowers, sprigs, spider webs, goldfish, snowflakes, and so forth loom large on the screen. The first and last pieces show faeries causing change in Nature (the transition from night to day, the procession of the seasons), while the second, third, and fifth show dancing plants; goldfish in the fourth piece seduce us with their sinuous movements and large eyes that look at us. This is an animist microcosm. [...]

Igor Stravinsky - The Rite of Spring: Here we experience 100s of millions of years of life on earth. Disney begins with an initial zoom from outside the galaxy to the earth's surface, traversing 100s of millions of miles of space. But we also see single-celled life in the early seas. And pterodactyls, all manner of terrestrial dinosaurs, a fight between a T. Rex and a Stegosaurus, violent cataclysms and storms. This may well be the first time anyone has attempted such a visualization, the origin of and evolutionary development of life. It is a naturalist macrocosm.

I wish especially to emphasize what Disney did with “The Rite of Spring,” compressing 100s of millions of years to a half hour of screen time. I dare say that is the first time it had been done – which is, I suppose, why that segment was shown in elementary schools for years. I don’t know how many times I saw it as a child, but enough so that a year came when I anticipated the day the school would be called to the auditorium to watch that film.

I don’t care that Disney got the microscopic world wrong because science has advanced considerably since then – the film came out in 1941 while, e.g. Watson and Crick published the double helix paper in 1953. Nor do I care that the climax, a fight between a T. Rex and Stegosaurus, could never have happened because the two species did not walk the earth at the same time (and I’m reasonably sure Disney’s people knew that). From a scientific point of view there are many things wrong in the film.

What Disney got right is the poetry, if you will, the scope of the movement, the evolution of the universe, the solar system, life on earth, from one time step to the next. I doubt that he intended to do that; he thought he was using a medium he knew and loved, cartoons, to sell classical music to the masses. It’s not at all clear to me that the film succeeds in that task. Where it does succeed, though, is in conveying a sense of the whole cosmos. And good old Uncle Walt didn’t even know he was doing that. He just did it.